Are Kazakhstani Women Satisfied with Antenatal Care? Implementing the WHO Tool to Assess the Quality of Antenatal Services
Next Article in Special Issue

Non-typhoidal Salmonella (NTS) are foodborne pathogens of global public health significance. The aim of this study was to subtype a collection of 85 NTS originating from poultry farms in Uganda, and to evaluate a subgroup of phenotypically resistant isolates for common antimicrobial resistance genes and associated integrons. All isolates were subtyped by pulsed-field gel electrophoresis (PFGE). Phenotypically resistant isolates (n = 54) were screened by PCR for the most relevant AMR genes corresponding to their phenotypic resistance pattern, and all 54 isolates were screened by PCR for the presence of integron class 1 and 2 encoding genes. These genes are known to commonly encode resistance to ampicillin, tetracycline, ciprofloxacin, trimethoprim, sulfonamide and chloramphenicol. PFGE revealed 15 pulsotypes representing 11 serotypes from 75 isolates, as 10 were non-typable. Thirty one (57.4%) of the 54 resistant isolates carried at least one of the seven genes (blaTEM-1, cmlA, tetA, qnrS, sul1, dhfrI, dhfrVII) identified by PCR and six (11%) carried class 1 integrons. This study has shown that a diversity of NTS-clones are present in Ugandan poultry farm settings, while at the same time similar NTS-clones occur in different farms and areas. The presence of resistance genes to important antimicrobials used in human and veterinary medicine has been demonstrated, hence the need to strengthen strategies to combat antimicrobial resistance at all levels. View Full-Text
Keywords: antimicrobial resistance; genotypes; non-typhoidal Salmonella; poultry; genes; integrons; subtyping antimicrobial resistance; genotypes; non-typhoidal Salmonella; poultry; genes; integrons; subtyping
►▼ Show Figures 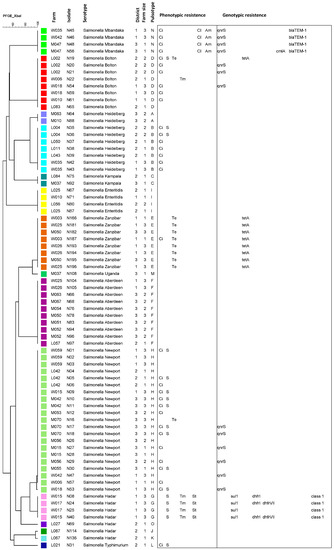