The Association between Maternal Stress and Childhood Eczema: A Systematic Review

Epidemiological Characteristics and Space-Time Analysis of the 2015 Dengue Outbreak in the Metropolitan Region of Tainan City, Taiwan

The metropolitan region of Tainan City in southern Taiwan experienced a dengue outbreak in 2015. This manuscript describes basic epidemiological features of this outbreak and uses spatial and temporal analysis tools to understand the spread of dengue during the outbreak. The analysis found that, independently of gender, dengue incidence rate increased with age, and proportionally affected more males below the age of 40 years but females above the age of 40 years. A spatial scan statistic was applied to detect clusters of disease transmission. The scan statistic found that dengue spread in a north-south diffusion direction, which is across the North, West-Central and South districts of Tainan City. Spatial regression models were used to quantify factors associated with transmission. This analysis indicated that neighborhoods with high proportions of residential area (or low wetland cover) were associated with dengue transmission. However, these association patterns were non-linear. The findings presented here can help Taiwanese public health agencies to understand the fundamental epidemiological characteristics and diffusion patterns of the 2015 dengue outbreak in Tainan City. This type of information is fundamental for policy making to prevent future uncontrolled dengue outbreaks, given that results from this study suggest that control interventions should be emphasized in the North and West-Central districts of Tainan city, in areas with a moderate percentage of residential land cover. View Full-Text
Keywords: dengue; space-time analysis; land use/land cover dengue; space-time analysis; land use/land cover
►▼ Show Figures 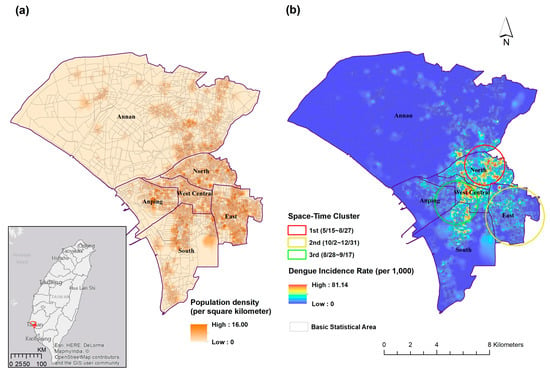