Prevalence of General and Central Obesity and Associated Factors among North Korean Refugees in South Korea by Duration after Defection from North Korea: A Cross-Sectional Study
Previous Article in Journal

Environmental pollution is an urgent concern worldwide [1]. Pollutant contamination can exert adverse effects on ecosystems and human health [2]. Trace elements are one type of pollutant released into the environment, and metal contamination levels are rising. The main sources of trace elements are natural activities such as volcanic eruptions and soil erosion, and human activities such as industrial production, waste disposal, the discharge of contaminated wastewater, the inappropriate management of electronic waste (e-waste), and the application of fertilizers in agriculture [3,4,5,6,7].
Once trace elements are released into the environment, they can be dispersed by the wind and deposited in soil and bodies of water, accumulating in marine sediments [8,9]. Moreover, trace elements can enter the food chain and accumulate in the human body, sometimes at harmful levels [10]. The most common trace elements found in the environment are cadmium (Cd), chromium (Cr), copper (Cu), nickel (Ni), arsenic (As), lead (Pb), zinc (Zn), and mercury (Hg) [10,11,12].
The Gulf of Thailand is an enclosed body of water in the southwestern part of the South China Sea that is situated between latitudes 5°00′ and 13°30′ N and longitudes 99°00′ and 106°00′ E [13,14]. The Gulf is bound by the line from Cape Cà Mau in Vietnam to the coastal city of Kota Bharu on the east coast of Peninsular Malaysia [15]. The average depth is 45 m, with a maximum depth of 80 m at the center of the Gulf [16]. The Gulf can be divided into two parts: Upper and Lower. The Upper Gulf, at the innermost area, is an inverted U-shape that is characterized as an estuary of a drowned river valley that was once above the surface. Fresh water from four major rivers—Mae Klong, Tha Chin, Chao Phraya, and Bangpakong—and minor rivers from the eastern and western parts of Thailand flows into the Upper Gulf, supplementing the nutrients, sediments, and pollutants in the basin [17]. The map of the Gulf of Thailand is shown in Figure 1.
Trace element contamination in the Gulf of Thailand, which is caused by rapid economic, social, agricultural, and industrial development and urbanization over the last three decades, has emerged as a major concern. Trace element concentrations and distribution in marine environments, especially enclosed marine environments such as the Upper Gulf, can be affected by factors such as variations in agricultural practices, population growth, industrial activities, land cover, land use, urbanization, seasonal changes, and climate change [5]. Specifically, industrial development projects such as the Eastern Seaboard have been suspected to contribute to trace element contamination in the Upper Gulf [18], which is known as a major marine resource in terms of fishing and aquaculture; its pollution will adversely affect its environmental qualities and increase health risks from consuming contaminated marine organisms, especially commercially important aquatic food sources such as fish, crabs, and mollusks [17]. Although the Thai government has established laws and regulations aimed at pollution control, the environmental quality of the Upper Gulf of Thailand is still a matter of debate, requiring scientific investigation.
The objective of this review was to evaluate published research on trace element concentrations in marine sediment and organisms, in order to reflect the status of trace element pollution in the Gulf of Thailand.

2. Trace Elements in Marine Sediment in the Gulf of Thailand

3. Trace Elements in Marine Organisms in the Gulf of Thailand

Trace elements have been defined as elements that occur in natural and pertubated environments in small amounts [62,63,64,65]. Although trace elements occur naturally, environmental contamination by trace elements has been accelerated through human activities such as mining, smelting, refinery, industrial production, and pesticides used in agriculture [10]. Some trace elements such as Cu, Mn, Ni, and Zn are essential elements for physiological and biological functions in the human body, but exposure to excess amounts can cause adverse effects. The possible human health hazards of major trace elements regarding the reviewed are as the following.
Cd is found in the Earth’s crust, and is commonly bound with Zn, Pb, or Cu ores. Human activities can generate cadmium to atmosphere, such as fossil fuels and municipal waste burning [63]. Cd can accumulate in soil, water, sediment, and aquatic organisms. Chronic oral exposure can cause adverse effects on the kidney, liver, lung, bone, immune system, blood, and nervous system [64].
Cr is widely distributed in rocks or soil, and has been used in various human activities such as trivalent chromium (Cr+3) or hexavalent chromium (Cr+6); these forms are used for chrome plating, dyes and pigments, leather, wood preservation, and the cooling treatment of tower water. Once Cr is released to the atmosphere, it will deposit on soil and water by wet or dry deposition, and can accumulate in aquatic organisms [65]. Human exposure to Cr+6 through food and water consumption can contribute adverse effects to the liver, kidney, gastrointestinal, immune systems, and possibly the blood [65,66] In addition, Cr+6 has been grouped as a human carcinogen [66].
Cu is found in the Earth’s crust and has been used in the production of cables, electric equipment, printed circuits, industrial metal planting and coating, and copper wires. It can enter the environment through waste dump, domestic wastewater, phosphate fertilizer production, wood production, and fossil fuel combustion. Cu can accumulate in aquatic organisms and transfer through the aquatic food chain. Although Cu is an essential element in human physiological function, exposure to excessive levels of Cu can cause liver and kidney damage, the destruction of red blood cells, immunotoxicity, and developmental toxicity [67,68]
Hg occurs naturally in the Earth’s crust in several forms, and has been used in several industrial production processes [69]. It can be found in metal forms such as mercury salts or as organic mercury compounds such as methylmercury (MeHg). Once Hg is released to the environment, it will finally end up in soil, water, and sediment. In aquatic environments, Hg can be transformed to methylated by bacteria to MeHg, and accumulate in aquatic food chains through bioaccumulation and biomagnification processes. Human exposure to Hg can cause adverse effects such as nervous system damage, DNA damage, and negative reproductive effects such as birth defects [70].
Mn is naturally present in rocks or soils. It has been used for steel production, aluminum alloy, dried cell battery paints, and fertilizer. Mn is water soluble, where Mn+2 is the dominant form. Although Mn is an essential element for humans, high levels of exposure via inhalation can cause adverse effects to the central nervous system (CNS), while adverse effects of exposure via oral routes are limited [71].
Ni is a natural element in the Earth’s crust. It has been used in several applications such as alloys, electroplating, batteries, coins, machinery parts, nickel-chrome resistance wires, and catalysts. Ni is an essential nutrient for some mammals and humans; however, excessive exposure to Ni via inhalation and dermal contact might cause adverse effects such as lung inflammation, nasal cavity damage, and allergic dermatitis, while toxic effects via oral exposure are unlikely to occur [72].
Pb occurs naturally in the Earth’s crust. It has been used in batteries, metal products, ammunition, paint, and ceramic products. Pb particles disperse in the air and are removed by wet or dry deposition, while Pb compounds in wastewater can be released to the river and accumulate in water, sediment, and aquatic organisms. Adverse effects of Pb exposure via ingestion can produce gastrointestinal symptoms, colic, constipation, abdominal pain, anorexia, and vomiting, while chronic Pb exposure can cause adverse effects on blood pressure, kidney function, and immune system [73]. The major concern of Pb exposure is in relation to its effects on IQ, learning, memory, and the behavior of children who are exposed to low levels of Pb in their early life.
Zn is one of the most common elements in the Earth’s crust. It has been used in various industries such as coating steel for construction, coating metal products, metal plating, wood preservative, dry batteries, textile machines, printers, paints, and pesticides. Zn is an essential nutrient for the human body; however, exposure to high doses can affect leukocyte numbers and functions, and decrease the density of lipoprotein (HDL) levels [74].
Overall, for the articles acquired in this review, Cd was found in most of the sediment samples, followed by Pb, Zn, Cu, Hg, Cr, Ni, and Mn, respectively. Meanwhile, Cd was also determined in most of marine organism samples, followed by Pb, Zn, Hg, Cr, Cu, Ni, and Mn, respectively (Figure 2).

Excessive land-based pollution caused by population growth, urbanization, and industrialization along the coastline is the main driving force of marine environmental degradation in the Gulf of Thailand [75]. Most studies on trace elements in the Gulf ecosystems have focused on the Upper Gulf region, and especially the major river estuaries and the Eastern Coast, where industrial activities have increased. The most-studied marine organisms have been blood cockles, green mussels, and oysters; Hg was typically the metal of concern.
The highest concentrations of Cd, Cr, Hg, Pb, and Zn in marine sediment throughout the reviewed data were 3.37 mg/kg [5], 82.61 mg/kg [24], 14 mg/kg [25], 79.8 mg/kg, and 800 mg/kg [5], respectively. Meanwhile, in marine organisms, the highest concentration of Cd, Cr, Cu, Hg, Pb, and Zn were found in A. granosa (21.14 mg/kg), A. granosa (5.21 mg/kg) [51], A. granosa (46.25 mg/kg) [60], Orcaella brevirostris (64.39 mg/kg) [51], A. granosa (11.09 mg/kg) [60], and Amusium pleuronectes (576 mg/kg) [57], respectively. The sediment and marine organisms from the Upper Gulf exhibited higher levels of trace elements than those from the Lower Gulf. This might be because the semi-enclosed condition of the Upper Gulf limits water exchange, leading to a higher accumulation of environmental pollutants than the Lower Gulf [15].
Spatial and temporal variations in trace element contents were observed, which were most likely related to anthropogenic activities [76] such as agriculture, aquaculture, tourism, urbanization, industry, harbor operations, and oil spills [5,14,36,77,78]. Other factors affecting the levels of trace elements in sediment and marine organisms included the input and transport of metals by river runoff, proximity to the sources of contamination, sediment composition, salinity, and meteorological conditions [79].
Marine bivalves are considered good sentinel species for trace element contamination, as they are bottom feeders or filter feeders [80,81,82]. In most of the studies reviewed here, levels of trace elements did not exceed permissible limits; however, the periodic monitoring of marine environments should be performed for preventing adverse environmental and health effects.

The author wishes to express her gratitude to the Department of Social and Environmental Medicine, Mahidol University for all support of the review. The author thanks Dean Meyer, ELS, from Edanz Group (www.edanzediting.com/ac) and Waranya Wongwit for editing a draft of this manuscript. 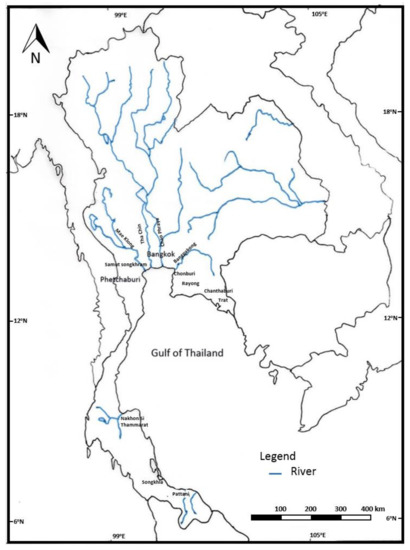 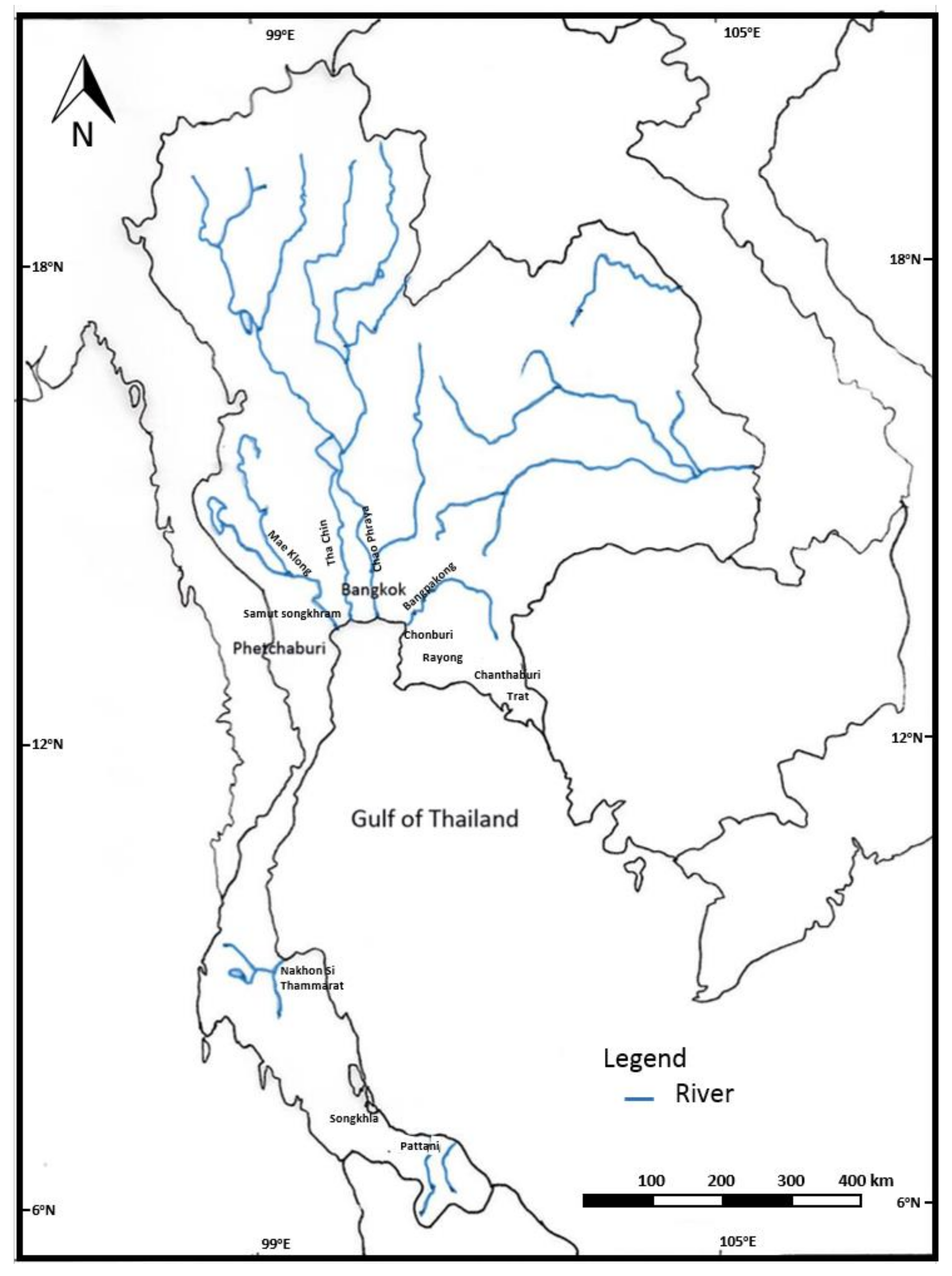 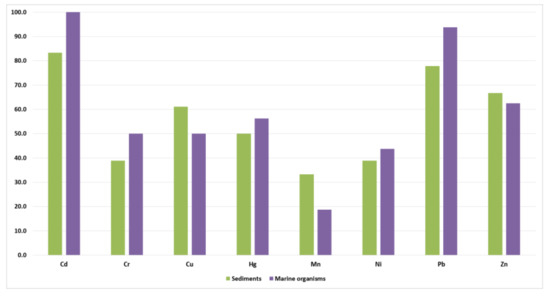 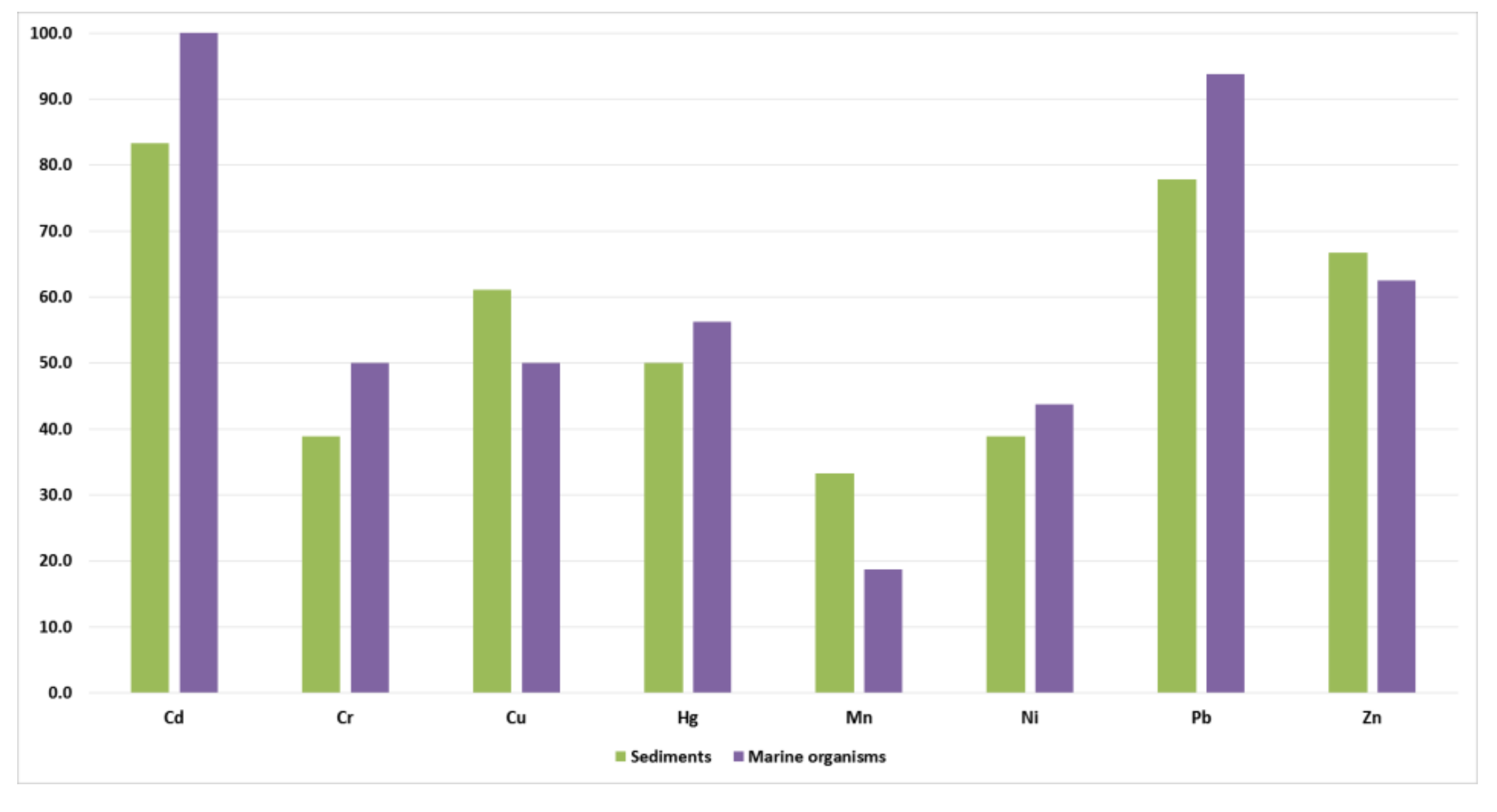