Foodborne disease (FBD) is a global public health concern, and foods from animal sources have been associated with outbreaks of food-related illness. In this study, animal carcasses from the two abattoirs (HT1 and HT2) in the formal meat sector (FMS) and slaughter points in the informal meat sector (INMS) were examined at two stages of slaughter (before washing and after washing) for aerobic colony counts (ACC) and total viable count (TCC), as well as Escherichia coli and Staphylococcus aureus count. At each stage, carcasses were sampled by swabbing at the neck, brisket, flank, and rump. ACC for beef, mutton, and pork carcasses at HT1 and HT2 before washing were between 2.5–5.8, 2.2–4.7, and 2.7–3.7 mean log CFU/cm2, respectively, and TCC count before washing was highest on the neck of cattle (6.3 ± 2.4) and after washing was highest on the perineal of sheep (5.7 ± 6.9). In the INMS, TCC count was highest on the brisket (6.9 ± 3.2) and in the neck (5.5 ± 2.4). Higher ACC values of 6.2–6.7 mean log CFU/cm2 were obtained in the INMS. The highest count for E. coli (4.2 mean log CFU/cm2) after washing was in the neck, while the highest count for S. aureus (4.0 mean log CFU/cm2) was in the flank. All bacteria count in the INMS exceeded acceptable limits, and washing did not significantly reduce microbial load in meat in the FMS and INMS. Bacteria count in the FMS and INMS exceeded acceptable standards. However, meat processed in the INMS poses a more significant risk of FBD to consumers.
Keywords: abattoir; Escherichia coli; food safety; meat; South Africa abattoir; Escherichia coli; food safety; meat; South Africa

Meat is a staple commodity in South Africa, consumed at a rate of 41.0 kg per capita per year. The nutritional composition of meat includes protein, fat, vitamins, and minerals such as iron, zinc, and phosphorus. Despite these benefits, meat has been well-known as a potential channel for spreading food-borne diseases due to its high water activity, high protein content, and approximately neutral pH, which create favourable conditions for the multiplication and survival of bacteria [1,2,3,4,5,6].
Although muscles of healthy animals do not contain microorganisms, meat tissues get contaminated during the various stages of slaughter and transportation. The risk of contamination happens from the point of entry of animals into the slaughters up to the time of meat consumption. In this regard, the abattoir environments and slaughter processes play leading roles in the spreading of microbial contamination [7,8]. Many factors may contribute as sources of contamination of carcasses along the chain of slaughter, including the animal’s skin and dung, equipment such as machines and cutting tools, an unhygienic environment, non-compliance with proper slaughter processes, and a lack of personal hygiene [8].
Escherichia coli and Staphylococcus aureus are among many common bacteria found to compromise meat quality. Many E. coli strains have emerged as important zoonotic foodborne pathogens. [9]. Hence, due to their ability to cause numerous sporadic cases and foodborne disease outbreaks in humans, they have become a significant public health threat [10,11,12]. Staphylococcus aureus, on the other hand, produces a variety of potent staphylococcal enterotoxins (SEs), which are resistant to inactivation by gastrointestinal proteases and are consequently responsible for staphylococcal food poisoning [10,13]. Severe gastroenteritis can develop within one to seven hours after the consumption of Staphylococcus aureus contaminated food, leading to diarrhoea, vomiting, and dehydration. Infections of the skin, soft tissue, joint, bone, respiratory, and endovascular disorders have frequently been reported [14]. Further complications such as pneumonia, meningitis, osteomyelitis, and toxic shock syndrome have been associated with staphylococcal infection [15].
In many developing countries, foodborne diseases (FDs) remain serious public health problems [12,16]. In South Africa, meat processed in the formal sector undergoes various checks for microbial quality. However, meat supplied from the informal sector is nonetheless not checked. The situation presents an opportunity for the supply of poor quality and contaminated meat products, enhancing the possibility of FD outbreak. A recent study indicates a high level of microbial contamination of beef carcasses at a high throughput abattoir in South Africa [17]. However, research about the quality of meat in the informal meat sector is limited. Thus, there is a need to determine the microbial quality of meat sold in the informal market. Hence, this study aims to assess the aerobic bacteria, coliform, Escherichia coli, and Staphylococcus aureus counts of raw meat, in the formal and informal meat sector.

A convenient sampling procedure was carried out using the simple random sampling method. The convenient method allowed sampling units to be selected at random based on the number of animals slaughtered on sampling days. All samples were collected between July and November 2015 from two high through-put abattoirs (HT1 and HT2) in the formal meat sector (FMS) and five animal slaughter points in the informal meat sector (INMS) (Figure 1). A total of 400 swabbed samples were collected using a sterile cotton throat swab from the HT1 (40 cattle) and HT2 (40 sheep and 20 pigs). In total, 112 swab samples were collected from the informal meat sector (15 cattle and 13 sheep). Four parts of each animal were sampled for cattle (rump, flank, brisket, and neck), sheep (perineum, flank, brisket, and neck), and pig (ham, back, belly, and jowl) [18,19]. A swab sample of the carcasses was performed after animal stunning, skinning, and evisceration. Swabbing was done before and after washing of the carcass. All swab samples were transported to the laboratory in a cooler box stocked with ice packs and processed within 3–8 h after collection.

2.2. Isolation and Identification of Organisms

All isolates previously stored in glycerol stocks were resuscitated by inoculation into nutrient broth (Merck, Johannesburg, South Africa), and incubated at 37 °C for 24 h. The extraction of DNA was performed using a boiling method as previously described elsewhere [25]. Briefly, about three to five colonies were picked with the aid of a sterile wire loop and put into sterile DNAase/RNAase-free Eppendorf tubes (Biologix, Lenexa, KS, USA) containing 200 μL nuclease-free water (Thermo Scientific, Waltham, MA, USA). Each suspension was mixed using a vortex machine (Digisystem Laboratory, New Taipei, Taiwan), and the cells were lysed by heating for 15 min in a heater block (Lasec, Cape Town, South Africa) at 100 °C. The lysate was then centrifuged at 13,000 rpm for 5 min, and the supernatant was collected in a sterile Eppendorf tube and stored at −20 °C for further use.

A standard polymerase chain reaction (PCR) for species-specific thermonuclease (Nuc) gene amplification was performed to detect S. aureus strains from the samples, and UidA was used for detecting E. coli. Isolates were confirmed to be positive for S. aureus if they were defined as Gram-positive, catalase-positive cocci showing a positive PCR result for the Nuc gene, which is highly specific for S. aureus [26]. A confirmatory PCR mix was in a total volume of 25 µL containing 5.0 µL of the DNA template, 5.5 µL nuclease-free water, 12.5 µL master mix, 1.0 µL forward primer, and 1.0 µL reverse primer. Escherichia coli (ATCC 25922) and Staphylococcus aureus (ATCC 25923) served as the positive control strains in each test protocol [25,27,28,29]. The PCR conditions for Escherichia coli and Staphylococcus aureus are listed in Table 1.
All reactions were carried out in a MyCyclerTM Thermal Cycler PCR system (BioRad, Hercules, CA, USA). The PCR products (5 μL) were subjected to 1.5% agarose gel electrophoresis (Separations, South Africa) stained with 0.001 μg/mL ethidium bromide (Sigma-Aldrich, St. Louis, MO, USA) using 0.5× Tris-borate EDTA (TBE) buffer at 100 V for 60 min. The gel was visualized under the UV transilluminator (Alliance 4.7, UVItec, Cambridge, UK). A 100 bp DNA ladder (Promega, Madison, WI, USA) was used as the molecular size standard for expected band size.

All data analysis was performed using Microsoft® Excel version 2007, (Microsoft, Redmond, WA, USA) mathematical functions and Statistical Package for Social Sciences (SPSS) version 22 (SPSS Inc., Chicago, IL, USA). Descriptive statistics were used to express the mean log, and standard deviation of the E. coli counts from the neck, brisket, flank, and rump of carcasses, before and after washing with water. A paired sample t-test was used to determine the difference in means before and after washing, and a value of p < 0.05 was considered significant.

Microbial count of meat in the formal and informal meat sectors exceeded acceptable limits by South African regulation. The high ACC, TCC, E. coli, and S. aureus counts in meat from the formal and informal meat sectors not only point to the existence of contamination and a weak hygiene management system, but also highlight the high risk of consumers contracting meat-related infections if not properly cooked. Foodborne diseases remain a global public health crisis which requires multifaceted, integrated, regional, and international collaborative solutions. The problem of meat hygiene in the informal setting could be even worse given the ubiquitous and unstructured nature of the sector. Interventions aimed at educating communal farmers who are the primary suppliers of meat in the INMS, consumers, and meat handlers could lead to an improved meat hygiene culture. Moreover, the training and re-training of slaughter workers on good slaughter practices (GSPs) and a hygiene management system (HMS) are crucial.

Authors are grateful to the National Research Foundation for providing the funding for this project through the Centre for Excellence in Food Security (Animal product safety- project grant No. 140702). We would like to thank the participating abattoirs.

All authors conceived the project design of the study. Ishmael Festus Jaja was responsible for data collection, data analysis and conscripting the manuscript, Voster Muchenje and Ezekiel Green supervised the project, interpreted data results and edited the manuscript. 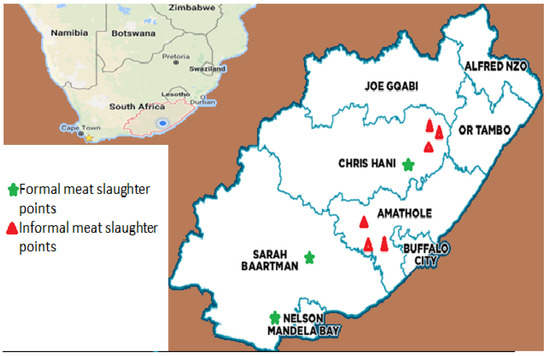 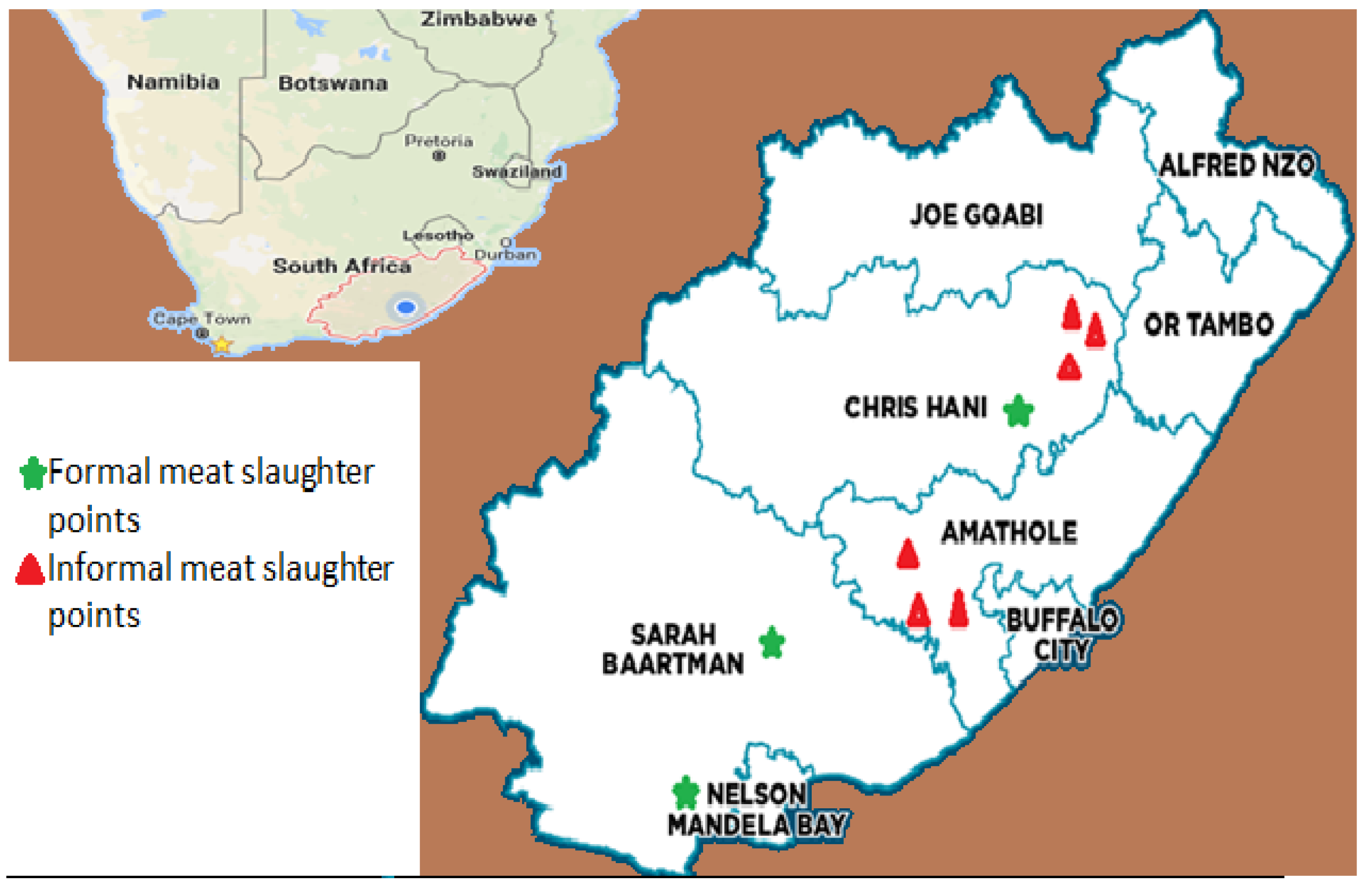