Spatio-Temporal Epidemiology of Viral Hepatitis in China (2003–2015): Implications for Prevention and Control Policies

The Social and Spatial Ecology of Dengue Presence and Burden during an Outbreak in Guayaquil, Ecuador, 2012

Dengue fever, a mosquito-borne arbovirus, is a major public health concern in Ecuador. In this study, we aimed to describe the spatial distribution of dengue risk and identify local social-ecological factors associated with an outbreak of dengue fever in the city of Guayaquil, Ecuador. We examined georeferenced dengue cases (n = 4248) and block-level census data variables to identify social-ecological risk factors associated with the presence/absence and burden of dengue in Guayaquil in 2012. Local Indicators of Spatial Association (LISA), specifically Anselin’s Local Moran’s I, and Moran’s I tests were used to locate hotspots of dengue transmission, and multimodel selection was used to identify covariates associated with dengue presence and burden at the census block level. We identified significant dengue transmission hotspots near the North Central and Southern portions of Guayaquil. Significant risk factors for presence of dengue included poor housing conditions, access to paved roads, and receipt of remittances. Counterintuitive positive correlations with dengue presence were observed with several municipal services such as garbage collection and access to piped water. Risk factors for increased burden of dengue included poor housing conditions, garbage collection, receipt of remittances, and sharing a property with more than one household. Social factors such as education and household demographics were negatively correlated with increased dengue burden. These findings elucidate underlying differences with dengue presence versus burden, and suggest that vulnerability and risk maps could be developed to inform dengue prevention and control; this is information that is also relevant for emerging epidemics of chikungunya and Zika viruses. View Full-Text
Keywords: dengue fever; geography; ecology; risk factors; climate; spatial analysis; temporal; Ecuador dengue fever; geography; ecology; risk factors; climate; spatial analysis; temporal; Ecuador
►▼ Show Figures 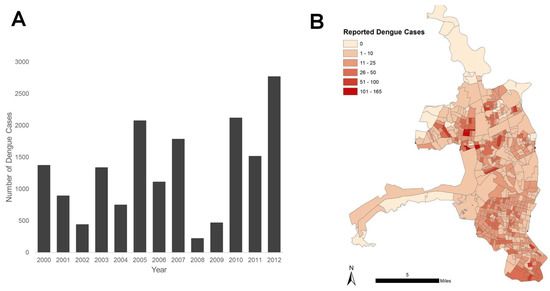