Although many developing countries use harvested rainwater (HRW) for drinking and other household purposes, its quality is seldom monitored. Continuous assessment of the microbial quality of HRW would ensure the safety of users of such water. The current study investigated the prevalence of pathogenic Escherichia coli strains and their antimicrobial resistance patterns in HRW tanks in the Eastern Cape, South Africa. Rainwater samples were collected weekly between June and September 2016 from 11 tanks in various areas of the province. Enumeration of E. coli was performed using the Colilert®18/Quanti-Tray® 2000 method. E. coli isolates were obtained and screened for their virulence potentials using polymerase chain reaction (PCR), and subsequently tested for antibiotic resistance using the disc-diffusion method against 11 antibiotics. The pathotype most detected was the neonatal meningitis E. coli (NMEC) (ibeA 28%) while pathotype enteroaggregative E. coli (EAEC) was not detected. The highest resistance of the E. coli isolates was observed against Cephalothin (76%). All tested pathotypes were susceptible to Gentamicin, and 52% demonstrated multiple-antibiotic resistance (MAR). The results of the current study are of public health concern since the use of untreated harvested rainwater for potable purposes may pose a risk of transmission of pathogenic and antimicrobial-resistant E. coli. View Full-Text
Keywords: antimicrobial resistance; pathogenic E. coli; harvested rainwater; public health; Sub-Saharan Africa; alternative water source antimicrobial resistance; pathogenic E. coli; harvested rainwater; public health; Sub-Saharan Africa; alternative water source
►▼ Show Figures 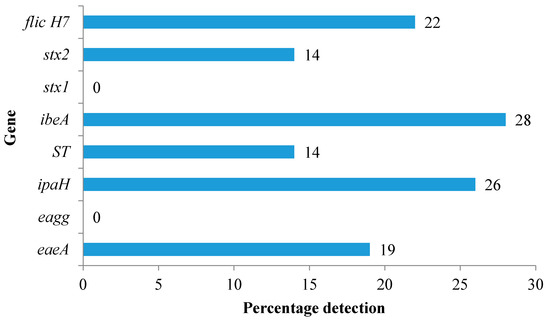