The Three Gorges Dam: Does the Flooding Time Determine the Distribution of Schistosome-Transmitting Snails in the Middle and Lower Reaches of the Yangtze River, China?

Schistosomiasis remains a serious public health problem worldwide, affecting more than 200 million people in approximately 76 countries with a loss of 1.53 million disability-adjusted life years (DALYs) [1].The disease is caused mainly by three species of blood fluke genus Schistosoma: S. japonicum, S. mansoni and S. haematobium. Schistosomiasis japonica, which is caused by S. japonicum, is widely endemic in China and the Philippines. Oncomelania hupensis, the only intermediate host of S. japonicum, plays a vital role in S. japonicum transmission in China, which makes Oncomelania snails a crucial target for disease control. The distribution of O. hupensis largely depends on environmental conditions such as vegetation coverage, temperature, soil type, and water level [2].There are four subspecies of O. hupensis on the mainland of China with discrete patterns of distribution and they are O. h. hupensis, O. h. robertsoni, O. h. Guangxiensis and O. h. tangi. These snails are only found in 12 provinces located along the Yangtze River and southern China (Figure 1) [3,4,5]. It seems likely that features of the landscape have influenced and channeled the habitats of four subspecies of O. hupensis. The Three Gorges Dam (TGD), a world-class water conservancy project, is located in the upper reaches of the Yangtze River, and the middle and lower reaches of this River are the largest endemic area of schistosomiasis in China. The TGD began to impound water and sediment discharge in 2003, and its water level rose to 135 m by the end of 2003. Since 2009, the water level has been kept at 175 m throughout November and December and is lower in the other months [6].The TGD represents a significant land use change in topography and evaporation that is expected to result in changes in the regional weather and climate patterns [7]. Previous studies by the Chinese Meteorological Institute suggested that the TGD reservoir area would alter local patterns of precipitation, wind, and temperature, and estimated that the annual average near surface air temperature in the vicinity of the TDG would increase by 0.3 °C [8]. It has been previously reported that some large-scale hydro projects (e.g., the Sudanese Gezira-Managil Dam, the Egyptian Aswan High Dam and the Ethiopian Melkasadi Dam) have resulted in the emergence or re-emergence of schistosomiasis [9,10,11,12,13]. After the Three Gorges Dam started operating, various studies have reported on the dam’s impact on the distribution of Oncomelania snails. Most of these reports revealed that the TGD has contributed to a reduction in the density of Oncomelania snails and/or changes in the distribution of Oncomelania snails in the downstream areas of the dam, including the Dongting and Poyang Lakes [6,14,15,16,17]. O. h. hupensis is strictly distributed in the Yangtze River basin. These Oncomelania snails are amphibious, thriving on land during winter and in water during summer, and their growth and development are sensitive to environmental factors such as flooding, temperature, humidity and vegetation [18,19,20,21]. Water is a necessary condition for schistosomiasis transmission [22]. The TGD has altered the water level of the Yangtze River and largely controlled flooding, which may the reason for observed reductions in the prevalence of infection with S. japonicum and the density of Oncomelania snails in the downstream areas [23]. To determine whether flooding is a key or critical factor for the presence of Oncomelania snails in the middle and lower reaches of the Yangtze River, China, and under the condition of the controlling effect of rainfall and air temperature, we studied the impacts of flooding on the presence or absence of O. h. hupensis in Hunan Province before 2003 when the dam functioned. We also examined the critical time window of flooding for the survival of Oncomelania snails.

Hunan Province, along the middle and lower reaches of the Yangtze River, is one of the schistosomiasis endemic areas in China. Oncomelania snails are mainly distributed in the vast floodplains of the Dongting Lake region, northeast of Hunan Province. The Dongting Lake, located at 28°30′–30°20′ N and 111°40′–113°40′ E, is the second largest fresh water lake in China. It has extensive connections with the Yangtze River in the north and also with four rivers (the Xiang, Zi, Yuan and Li Rivers) in the south and west. When the wet season begins in April or May, with the flows from rivers and the backflow from the Yangtze River, the water level rises, and many marshlands in Hunan Province become immersed with water until September or October. Grass-covered marshlands are suitable for cattle grazing and snails breeding, which makes the Dongting Lake region one of the regions most affected by schistosomiasis, historically.

O. h. hupensis was mainly distributed in the northeastern part of Hunan Province. The distribution of snails was marked using ArcGIS10.0 (Environmental Systems Research Institute, Inc., Redlands, CA, USA) with the village as the basic unit, according to the Schistosomiasis Atlas of the People’s Republic of China (Figure 1) [24], and the area distribution of O. h. hupensis was largely unchanged during the study period. Based on the presence or absence of Oncomelania snails, study areas in Hunan Province were divided into two types: areas with and without snails.

Air temperature was obtained from the China Meteorological Data Sharing Service System at four monitoring sites in the Hunan Province: Changde (111.51° E, 29.02° N), Changsha (112.59° E, 28.12° N), Zhijiang (109.78° E, 27.44° N) and Yongzhou (111.37° E, 26.13° N). Changde and Changshaare are located in areas with Oncomelania snails, while Zhijiang and Yongzhou belong to the areas without Oncomelania snails. The downloaded temperature data included monthly average temperature and annual lowest air temperature in the four sites from 1995 to 2002. Then, annual average temperature was calculated for these 8 years.

2.3.2. Hours of Daylight and Relative Humidity

Daily rainfall and the number of days of daily rainfall greater than 0.1 mm were collected from the Hunan flood control information system at 15 selected monitoring sites, where 7 sites were located in the areas with snails and 8 sites were in areas without snails. The annual rainfall from 1996 to 2002 (data were not complete for the year of 1995) was calculated according to the daily rainfall.

2.3.4. Number of Days Inundated with Water

Daily water levels from 1995 to 2002 were obtained from 17 hydrological stations in Hunan Province. Among these stations, 9 were located in areas with snails and the other 8 were located in the areas without snails. A grassland close to each station and possibly suited to snails (so-called winter-land, summer-water breeding stimulation) was selected to estimate the number of days inundated with water. With the help of Google Earth, 20 points along the marshland were selected by systematic sampling (200 m apart between points) (Figure 2). The elevation of each point was obtained from the Hunan grid map of elevation. We calculated the flooding time per year by comparing daily water levels and the elevation of each point. If the water level in a day was higher than the elevation, this point was considered to be flooded, or otherwise, not flooded.

All data were entered in Microsoft Office Excel 2007 (Microsoft Corp., Redmond, WA, USA) and statistical analyses were done with IBM SPSS software (version 20.0, IBM, Armonk, NY, USA) and R (R version 3.3.0, R project, Vienna, Austria) The Shapiro-Wilk test was used to test the normal distribution of environmental data, including air temperature, hours of daylight, relative humidity, rainfall and days inundated with water. The Whitney U test was used to compare medians of the environmental factors. A generalized additive model was used to evaluate the impacts of rainfall, days inundated with water, air temperature, hours of day light and relative humidity on the occurrence or absence of snails.

3.2. Generalized Additive Model (GAM) of the Distribution of Snails

The impact of factors on the occurrence of snails were analyzed by using a generalized additive model that allows non-linear relationships between response and explanatory variables. As shown in Table 2, the occurrence of snails was significantly related to the interaction between annual rainfall and lowest air temperature in a year (Z = −3.697, p < 0.05) as well as the interaction between lowest air temperature in a year and days of rainfall greater than 0.1 mm (Z = −3.540, p < 0.05). Factors including, days inundated with water (χ2 = 31.28, p < 0.05), lowest air temperature in a year (Z = 3.648, p < 0.05), annual rainfall (Z = −3.641, p < 0.05), days of daily rainfall greater than 0.1 mm (Z = −3.658, p < 0.05), and hours of daylight (Z = −2.674, p < 0.05), were also significantly associated with the occurrence of snails. The number of days inundated with water was related to the occurrence of snails (χ2 = 31.28, p < 0.05) but not in a linear fashion, as shown by the smooth function in the GAM. Relative humidity was highly correlated with hours of daylight with a correlation coefficient of 0.95. Therefore, with hours of daylight in the model, relative humidity was not significant and it was excluded from the final model.

The number of days inundated with water might be a key factor determining the geographical distribution of Oncomelania snails in Hunan Province. The favorable number of days inundated with water for the survival of snails might range from 2 to 7 months. The study also shows that rainfall and hours of daylight were associated with the distribution of Oncomelania snails.

This work is supported by National Natural Science Foundation of China (No. 81673236) and The Fourth Round of Three-Year Public Health Action Plan of Shanghai, China (No. 15GWZK0101). 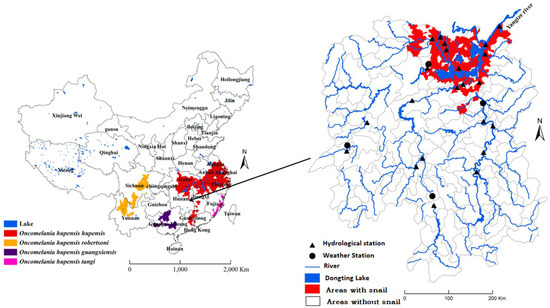 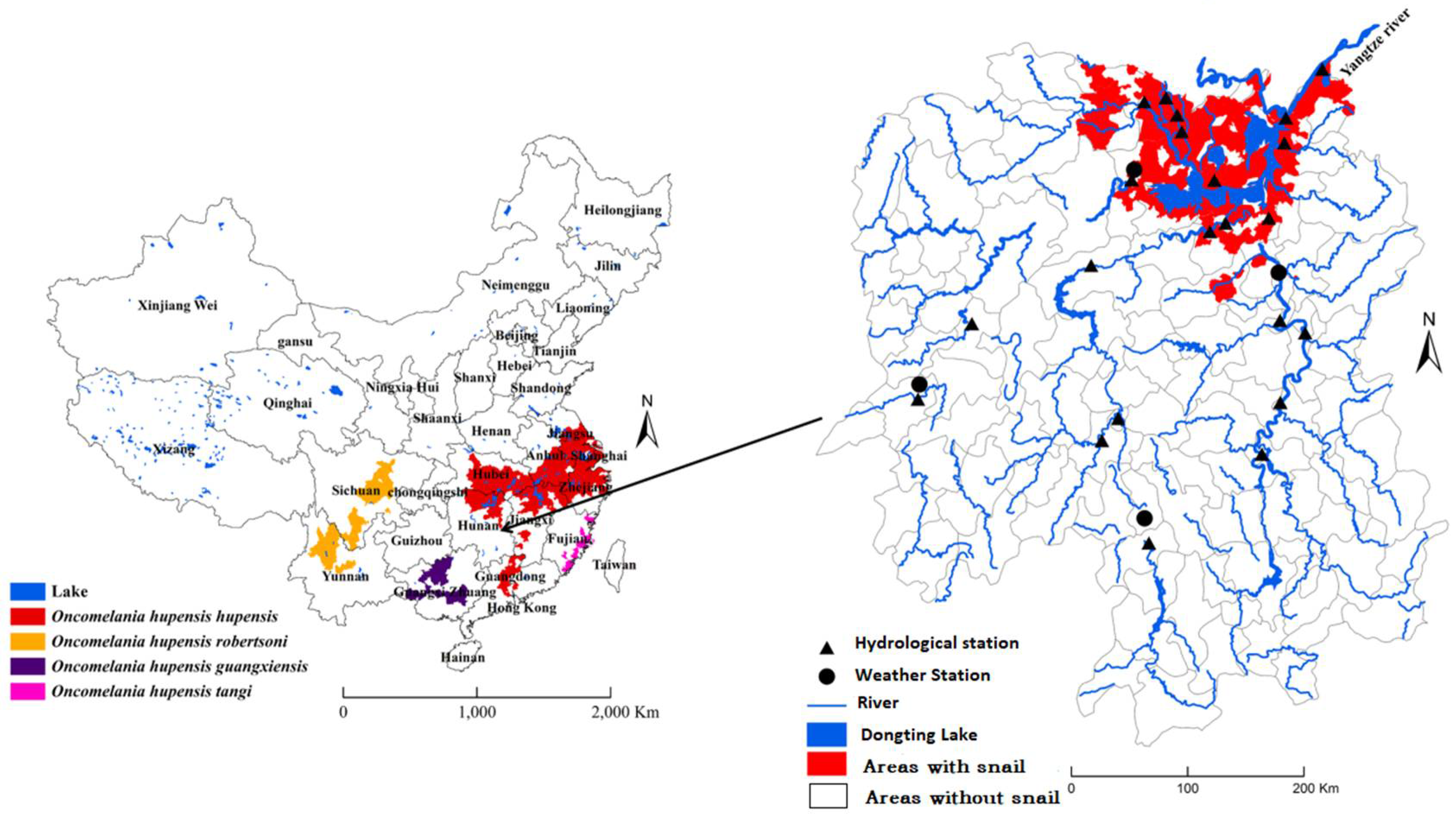 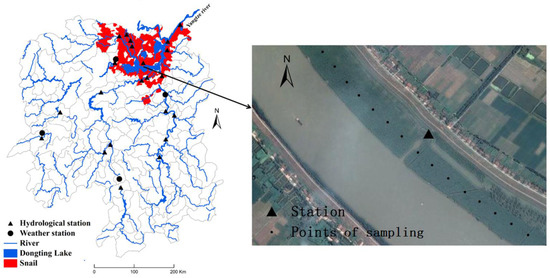 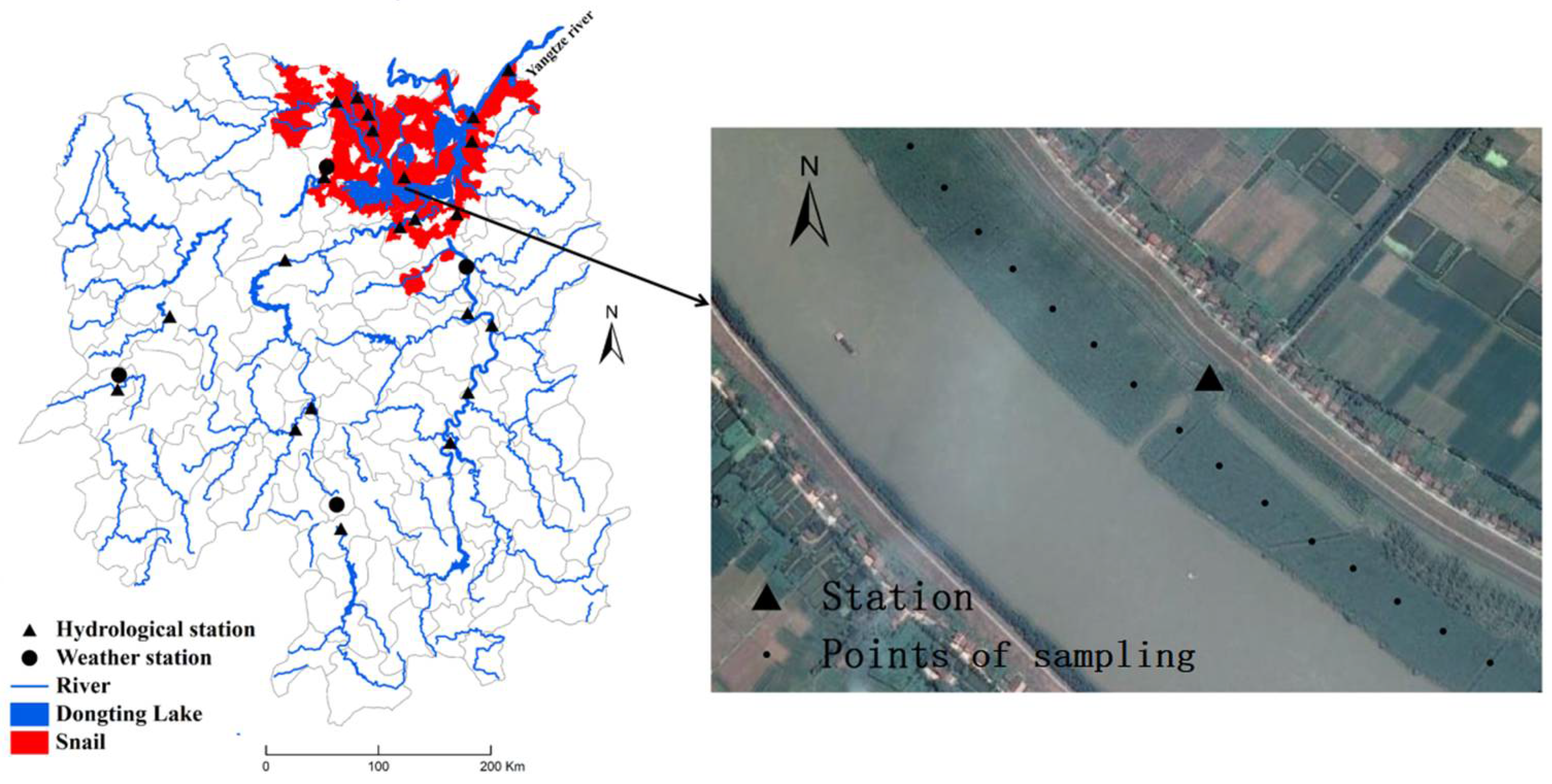