Do Income, Race and Ethnicity, and Sprawl Influence the Greenspace-Human Health Link in City-Level Analyses? Findings from 496 Cities in the United States
Previous Article in Journal

Analysis of sediment grain sizes and heavy metal correlations in the western part of Lake Taihu shows that the grain size of the sediment is stable as a whole. With increasing depth, the grain size tends to decrease. Heavy metals such as Cr, Cd, Pd and Sr are strongly correlated and influence each other. Based on the positive matrix factorization (PMF) model, this study classified the origin of heavy metals in the sediments of western Lake Taihu into three major categories: Agricultural, industrial and geogenic. The contributions of the three heavy metal sources in each sample were analyzed and calculated. Overall, prior to the Chinese economic reform, the study area mainly practiced agriculture. The sources of heavy metals in the sediments were mostly of agricultural and geogenic origin, and remained relatively stable with contribution rates of 44.07 ± 11.84% (n = 30) and 35.67 ± 11.70% (n = 30), respectively. After the reform and opening up of China, as the economy experienced rapid development, industry and agriculture became the main sources of heavy metals in sediments, accounting for 56.99 ± 15.73% (n = 15) and 31.22 ± 14.31% (n = 15), respectively. The PMF model is convenient and efficient, and a good method to determine the origin of heavy metals in sediments. View Full-Text
Keywords: sediment; positive matrix factorization; heavy metal; source resolution sediment; positive matrix factorization; heavy metal; source resolution
►▼ Show Figures 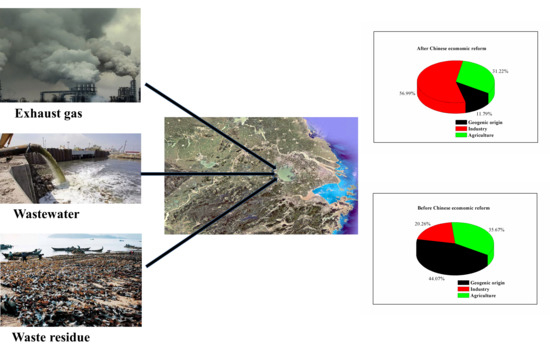