A Systematic Review of Sexual and Reproductive Health Knowledge, Experiences and Access to Services among Refugee, Migrant and Displaced Girls and Young Women in Africa
Next Article in Special Issue

The epidemic of type 2 diabetes mellitus (T2DM) and the possibility of it contributing to the risk of Alzheimer’s disease (AD) have become important health concerns worldwide and in Pakistan, where the co-occurrence of T2DM and AD is becoming more frequent. To gain insights on this phenomenon, a cross-sectional study was initiated. We recruited and interviewed 820 research participants from four cities in Pakistan: 250 controls, 450 T2DM, 100 AD, and 20 with both diseases. Significant differences between groups were observed for age (p < 0.0001), urban vs. rural locality (p = 0.0472) and residing near industrial areas. The average HbA1c (%) level was 10.68 ± 2.34 in the T2DM group, and females had a lower level than males (p = 0.003). In the AD group, significant relationships existed between education and family history. Overall, the results suggest that T2DM and AD were associated with both socio-demographic and environmental factors in Pakistani participants. Detailed molecular investigations are underway in our laboratory to decipher the differential genetic pathways of the two diseases to address their increasing prevalence in this developing nation. View Full-Text
Keywords: type 2 diabetes; Alzheimer’s disease; Pakistan; epidemiology type 2 diabetes; Alzheimer’s disease; Pakistan; epidemiology
►▼ Show Figures 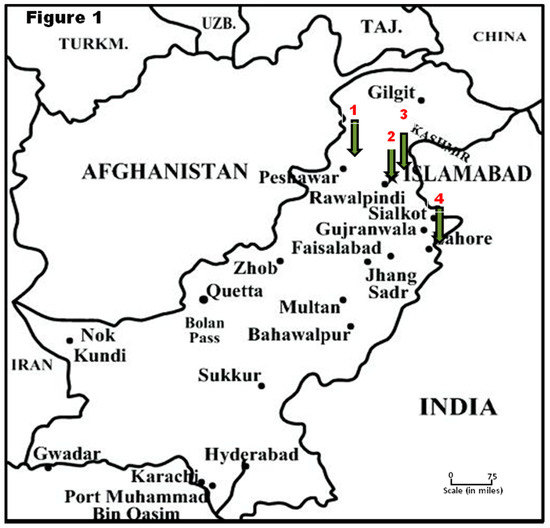