Drivers Analysis of CO2 Emissions from the Perspective of Carbon Density: The Case of Shandong Province, China

Against the backgrounds of emission reduction targets promised by China, it is crucial to explore drivers of CO2 emissions comprehensively for policy making. In this study, Shandong Province in China is taken as an example to investigate drivers in carbon density by using an extended Kaya identity and a logarithmic mean Divisia index model (LMDI) with two layers. It is concluded that there are eight positive driving factors of carbon density during 2000–2015, including traffic congestion, land urbanization, etc., and seven negative driving factors comprising energy intensity, economic structure, etc. Among these factors, economic growth and energy intensity are the main positive and negative driving factor, respectively. The contribution rate of traffic congestion and land urbanization is gradually increasing. Meanwhile, 15 driving factors are divided into five categories. Economic effect and urbanization effect are the primary positive drivers. Contrarily, energy intensity effect, structural effect, and scale effect contribute negative effects to the changes in carbon density. In the four stages, the contribution of urbanization to carbon density is inverted U. Overall, the results and suggestions can give support to decision maker to draw up relevant government policy. View Full-Text
Keywords: carbon density; LMDI; Kaya identity; structural change carbon density; LMDI; Kaya identity; structural change
►▼ Show Figures 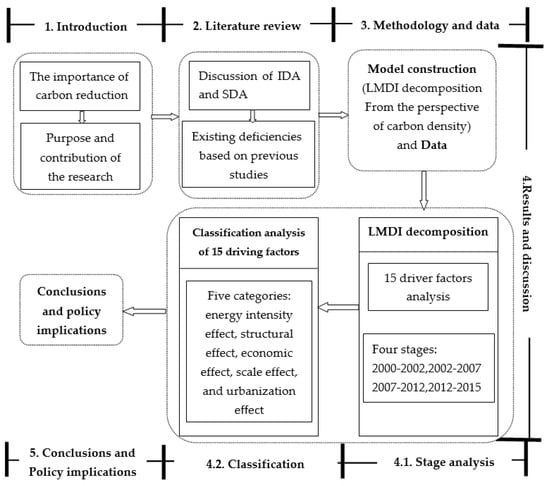