What Explains Education Disparities in Screening Mammography in the United States? A Comparison with The Netherlands
Previous Article in Journal

Live and Let Die? Life Cycle Human Health Impacts from the Use of Tire Studs

Socioeconomic Factors and Caries in People between 19 and 60 Years of Age: An Update of a Systematic Review and Meta-Analysis of Observational Studies

This study is aimed to perform an update of a systematic review and meta-regression to evaluate the effect modification of the socioeconomic indicators on caries in adults. We included studies that associated social determinants with caries, with no restriction of year and language. The Newcastle-Ottawa Scale was used to evaluate the risk of bias. With regard to the meta-analysis, statistical heterogeneity was evaluated by I2, and the random effect model was used when it was high. A subgroup analysis was conducted for socioeconomic indicators, and a meta-regression was performed. Publication bias was assessed through Egger’s test. Sixty-one studies were included in the systematic review and 25 were included in the meta-analysis. All of the studies were published between 1975 and 2016. The most frequent socioeconomic indicators were schooling, income, and socioeconomic status (SES). In the quantitative analysis, the DMFT (decayed, missing, filled teeth) variation was attributed to the studies’ heterogeneity. The increase of 10.35 units in the proportion of people with lower SES was associated with an increase of one unit in DMFT, p = 0.050. The findings provide evidence that populations with the highest proportions of people with low SES are associated with a greater severity of caries. The results suggest the need for actions to reduce the inequalities in oral health (PROSPERO [CRD42017074434]). View Full-Text
Keywords: adults; caries; socioeconomic status; epidemiology; meta-analysis adults; caries; socioeconomic status; epidemiology; meta-analysis
►▼ Show Figures 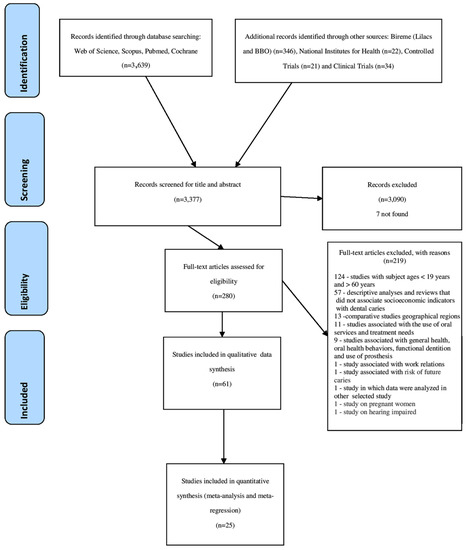