Can Urban-Rural Patterns of Hospital Selection Be Changed Using a Report Card Program? A Nationwide Observational Study
Next Article in Special Issue

Is Infant/Toddler Anemia a Problem across Rural China? A Mixed-Methods Analysis
Previous Article in Special Issue

Bacillary dysentery, a common infectious disease, is caused by the bacteria of the genus Shigella and is usually transmitted by fecal–oral route or sometimes contact through flies, food and water [1,2]. People with poor hygiene habits or in poor sanitation and with a lack of sanitary water supply are more susceptible to infection [3,4,5,6,7]. People of all ages can get infected with bacillary dysentery, and infection rates are higher among pre-school children and young adults [1]. Its incubation period is generally 1–4 days. Most patients can be cured in 1–2 weeks, but with short immunity, and the infected are susceptible to multiple infections due to the absence of cross-protection [1]. Shigella has a couple of serotypes, classified as Shigella dysenteriae, Shigella flexneri, Shigella boydii and Shigella sonnei according to their biochemical reactions and O antigen. Their epidemiological patterns are different, with Shigella flexneri mainly prevailing in developing countries and Shigella sonnei mainly in developed countries [8,9]. With socio-economic development, Shigella sonnei has gradually replaced Shigella flexneri as the major cause of epidemics in the new industrial parks in Thailand, Iran, South Korea, Taiwan, Vietnam, China and Bangladesh [10,11,12,13,14,15,16]. Shigella episodes are a global public health issue with an estimated 165 million cases around the world and more than 100 million occurring in developing countries [17]. Although the incidence of bacillary dysentery in the world has declined significantly in recent years, it remains high in developing countries [8,10,18,19]. The incidences in China remains high with an estimate of 15.29 per 100,000 population in 2012 and 11.24 per 100,000 population in 2014 [20,21]. The incidence of bacillary dysentery differs in each region; for example, the average annual incidences were 22.12 per 100,000 population from 2004 to 2014 in Sichuan Province, 24.48 per 100,000 population in Baise from 2004 to 2012, and from 6.00 to 15.80 per 100,000 population during 2010–2015 in Hunan Province [22,23,24]. Few studies have been done about this disease in Zhejiang Province, resulting in knowledge gaps in the aspects of high-risk population, high-risk regions, peak period and spatiotemporal characteristics. Geographical information system (GIS) has been widely used to analyze the spatiotemporal characteristics of diseases, helping to monitor and prevent the communicable diseases [25]. For example, it is easy for people to view the incidence difference of bacillary dysentery between regions via an incidence level map [26,27]. Global autocorrelation is employed to detect the clusters of a disease, local autocorrelation is employed to examine regional patterns and ascertain the exact clustering location, and Moran’s I can be used to fulfill such purposes [28,29,30]. Spatiotemporal scan is employed to detect diseases in time and space, verify random distribution of the disease in time and space, and ascertain the number of cases in a region, the scope of the disease and other information indicating possible areas of high risk [31]. As it involves demographic information, spatiotemporal scan is more useful than other methods in the detection of clustering in low-incidence areas [32]. Special clusters are usually identified by comparing the observed number with the expected one using Log-likelihood Ratio (LLR) [33].
In this study, we intended to conduct a full scope analysis of the epidemiological characteristics of bacillary dysentery and identify the high-risk regions, both spatially and temporally, using above-mentioned methods, thus providing the basis for the monitoring, prevention and control of bacterial dysentery in Zhejiang Province.

Seasonality of bacillary dysentery incidence in Zhejiang Province was characterized by analyzing peak month and peak days. Peak days are the day with the most cases of the disease in the whole year. Circular distribution is generally applicable to the seasonal disease with only one peak period [35]. To calculate circular distribution, 365 days in a year is changed to 360°, and one day is represented by 0.9863°. The monthly median is taken as the middle value of the group and is then converted into degrees. Thus, circular distribution is calculated as the following [36], where fi is the monthly cases of disease, αi is monthly degree, n is the yearly cases of disease, r-value is the index for degree of dispersion, and s is standard deviation of the angle.

Spatiotemporal scan analysis was performed to identify the most likely clusters (with the largest LLR values), auxiliary clusters (with statistically significant LLRs), and clustering time [43]. In this study, we collected data of the permanent residents, the latitude and longitude of each county and organized the case data by month at the county level. When the high-incidence clusters were calculated, retrospective space-time analysis was performed, Poisson model was chosen as probability model to estimate high-incidence areas, and the maximum spatial cluster size was defined as a circle with a 60-kilometer radius.

Exclusion of those with unclear addresses (less than 1%) left a total of 105,577 patients diagnosed as bacillary dysentery in Zhejiang Province from 2005 to 2017, with an obvious decline in the incidence from 45.84/100,000 in 2005 to 3.44/100,000 in 2017 (Figure 2). The annual average rate of decline was 6.84 per 100,000 population, but it decreased by 11.50 per 100,000 population in 2009. More than half of the infections occurred in July, August, September and October. Seasonality was obvious with a peak in summer and autumn from July to October during 2005–2017 (Figure 3). The peak days of infections always fell in summer and came earlier every year from August in 2005 to July in 2017. The proportion of cases from July to October showed a declining trend (Figure 4).
Gender distribution showed that the number of cases in males was higher than in females every year (Figure 2). The incidences in all age groups declined from 2005, and the incidences and the number of cases in 0–5-year group were much larger than other age groups. The Spearman’s rank correlation showed that the incidences in every age group were negatively correlated to year (p < 0.001), while the incidences were negatively correlated to age groups only during 2005–2008 (p = 0.022, 0.025, 0.044 and 0.047, respectively) (Table 1). In terms of occupation, the proportions of pre-education children, farmers and students were consistently higher than others every year, and the differences between occupations were statistically significant (p < 0.001) (Figure 5).

The incidences of bacillary dysentery were mapped at county level in Zhejiang Province from 2005 to 2017 (Figure 6), and the maps indicated that counties in and around Hangzhou had higher incidences than other places. Counties in Hangzhou being excluded, the counties with high incidences were found to be scattered. The number of counties with an incidence over 10.00/100,000 declined from 78 in 2005 to 10 in 2017.

Spatiotemporal cluster analysis showed 12 high-incidence clusters of bacillary dysentery in Zhejiang Province from 2005 to 2017. High-incidence clusters were detected in 64 counties, with all clusters occurring before 2011. The most likely clusters were found from May 2005 to November 2008 (LLR = 30394.63, p < 0.001) in 18 counties (mainly in Hangzhou, Jiaxing and Huzhou). Other clusters (the third most likely, the fifth most likely, the eighth most likely, and the eleventh most likely) were observed in the coastal regions (Ningbo, Taizhou, Wenzhou and Zhoushan). In all clusters, the longest duration was 43 months and the shortest only one month (Figure 8).

In this study, we filled some gaps in knowledge of bacillary dysentery in the aspects of its long-term trend, high-risk population, peak period and comparative spatiotemporal clustering, which provided solid evidence for targeted strategy in the prevention and control of bacterial dysentery in Zhejiang. The average incidence of bacillary dysentery declined by a large margin since 2005 to a low level (4.25 per 100,000 population) in 2014, which was lower than the average in China as a whole and other Chinese provinces [21,44,45] and lower than that reported in the United States (6.5 per 100,000 population) [46]. Such findings suggest that prevention and control have been effective. Zhejiang Province began to manage water supply and built sanitary toilets on a large scale in 2008, and these measures could have significantly reduced the incidences of infectious diseases transmitted by fecal–oral route including bacillary dysentery [47,48,49]. Some studies showed that the incidences of the infections featured seasonality with an obvious temporal peak appearing from July to October (in summer and autumn) each year, which was consistent with our results [50,51,52]. Zhejiang, a coastal province located in southeast China, enjoys a subtropical monsoon climate with high temperatures and abundant precipitation in summer, accounting for the high incidences of bacillary dysentery. Preference for cold or uncooked food in Zhejiang could be another reason for the high incidences in summer [53,54]. Declined cases from July to October meant less obvious seasonality from 2009, and the risk factors for disease also decreased at the same time, suggesting that measures including water management and hygiene improvement adopted by the government from 2008 might have made a huge contribution.
The incidences of bacillary dysentery declined by a large margin in both men and women and the incidences in the former were always statistically significantly higher than those in the latter. Men were more likely to be infected because they performed more outdoor activities, drank raw water and had poorer hygiene habits after work [55,56,57]. Consistent with other studies [21,58,59], among the pre-education children, the largest group of bacillary dysentery, 0–5-year-old group still had the highest incidences, although all incidences declined greatly, warranting strengthened monitoring and interventions for them, e.g. teaching good hygiene practices. The number of counties with incidences higher than 10.00/100,000 decreased, suggesting that the public health measures were effective in recent years. The incidence maps showed that counties in Hangzhou always had the highest incidences across the province from 2005, an observation consistent with the findings of spatiotemporal cluster scan analysis. As the provincial capital, Hangzhou enjoyed rapid economic development, dense population and many immigrants, which may have led to the high incidences of disease [60,61].
Moran’s I was chosen to estimate spatial autocorrelation because it is not easily affected by skewed distribution [62]. At the same time, some studies have shown that Moran’s I focuses more on the co-correlation between spatial objects, and Moran’s I is more widely used [63]. The high–high clusters reflected a high impact of the high-incidence areas on surrounding area. Global autocorrelation and local autocorrelation indicated that the incidence of bacillary dysentery was not randomly distributed at county level in Zhejiang Province, and that there was a spatial correlation every year. Local autocorrelation found constant high–high clusters in Hangzhou with small fluctuations with time, implying more attention should be paid to monitoring and preventing the disease in these areas.
Spatiotemporal scan reflected clustering. In this study, clusters occurred almost every year from 2005 to 2008. A project aimed at reconstructing the water supply and lavatories was launched in Zhejiang Province in the 1980s, which was further strengthened in 2008 [49]. Given that sanitary interventions effectively reduce the intestinal infectious diseases, the project might have resulted in a sharp decline of bacillary dysentery after 2008. Social and economic development might account for the observation that all high-incidence clusters of bacillary dysentery occurred before 2011.

The incidence of bacillary dysentery declined in Zhejiang Province from 2005 to 2017, with high incidences in some areas and peaks in summer and autumn. The findings provide evidence of effective early interventions such as protection and health education of high-risk populations, especially males and children <5 years old; surveillance of the high-risk areas, especially in peak period every year; the management of water resources; and construction of sanitary toilets.

This study was part of the key project of science and technological funded by the Science and Technology Department of Zhejiang Province (2015C01027), and the project entitled Researching on Intelligent Monitoring Platform Based on Large Data for Public Health Emergency (WKJ-2J-1007).

The authors want to express their thanks to the Zhejiang Provincial Center for Disease Control and Prevention for the data of the diseases as well as the help from teachers of Hangzhou Normal University.

Availability of Data and Materials

The data generated during the study are not publicly available due to regulations, but they can available from the corresponding author through request. 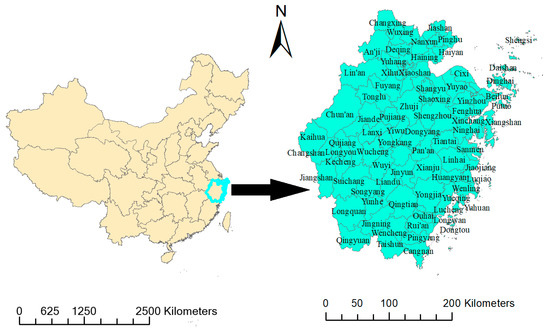 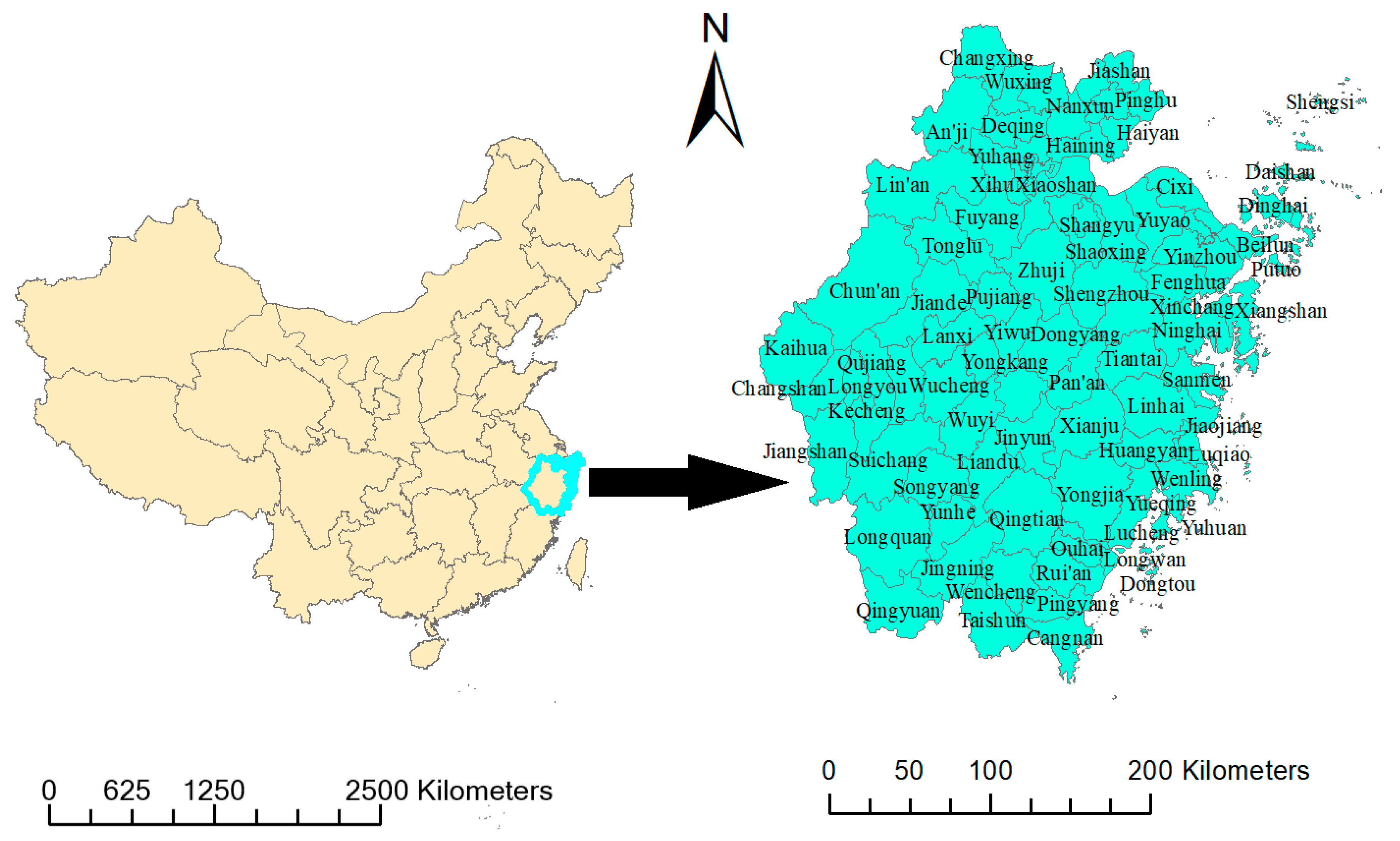 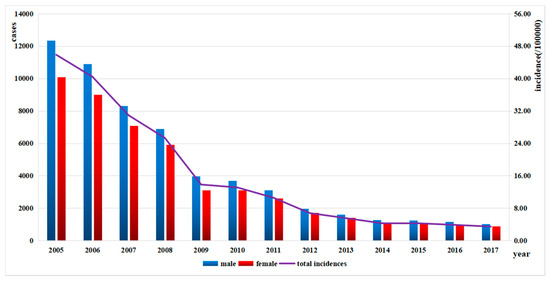 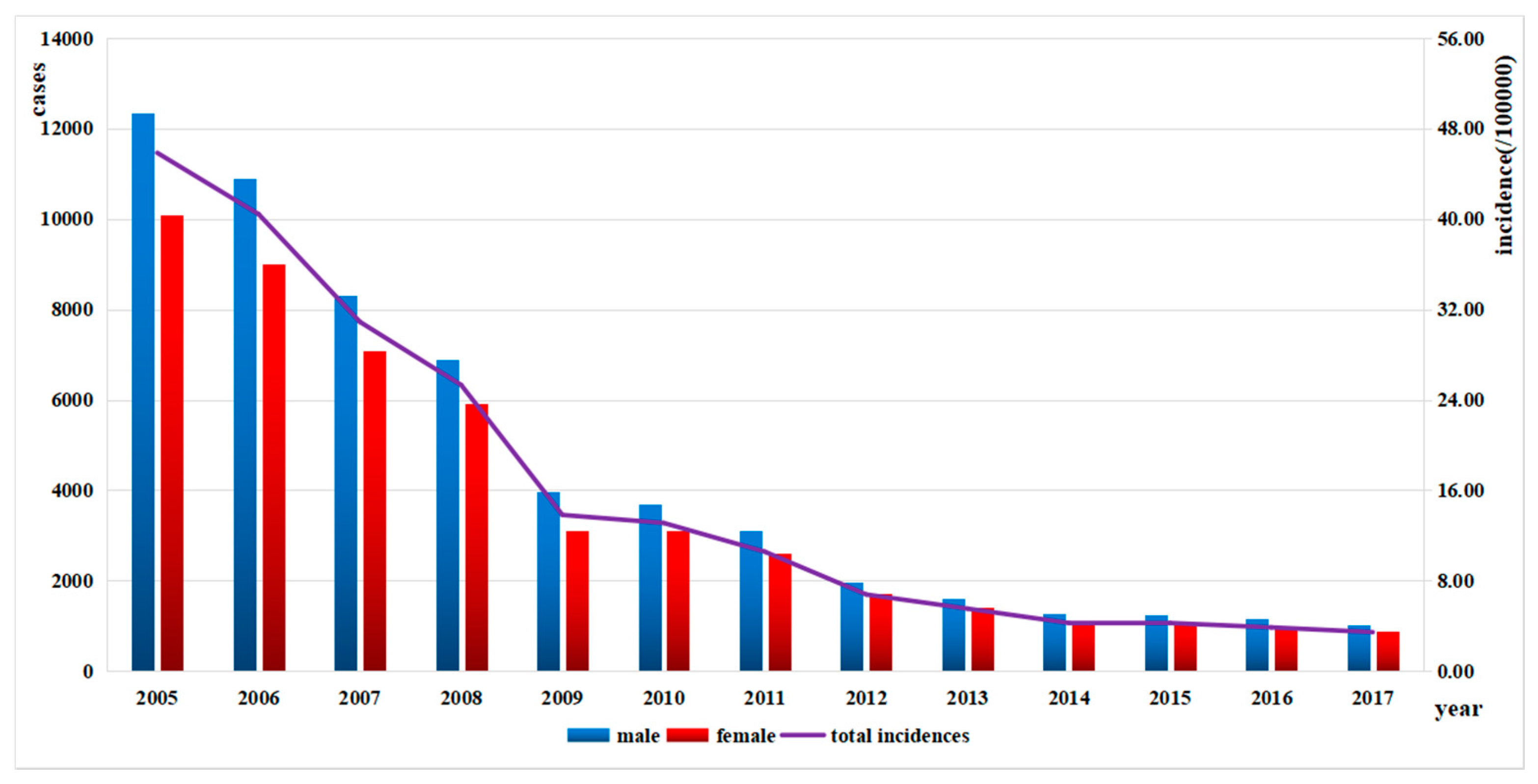 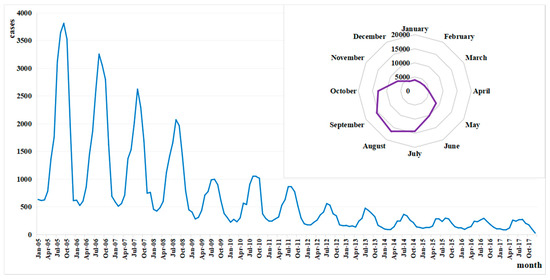 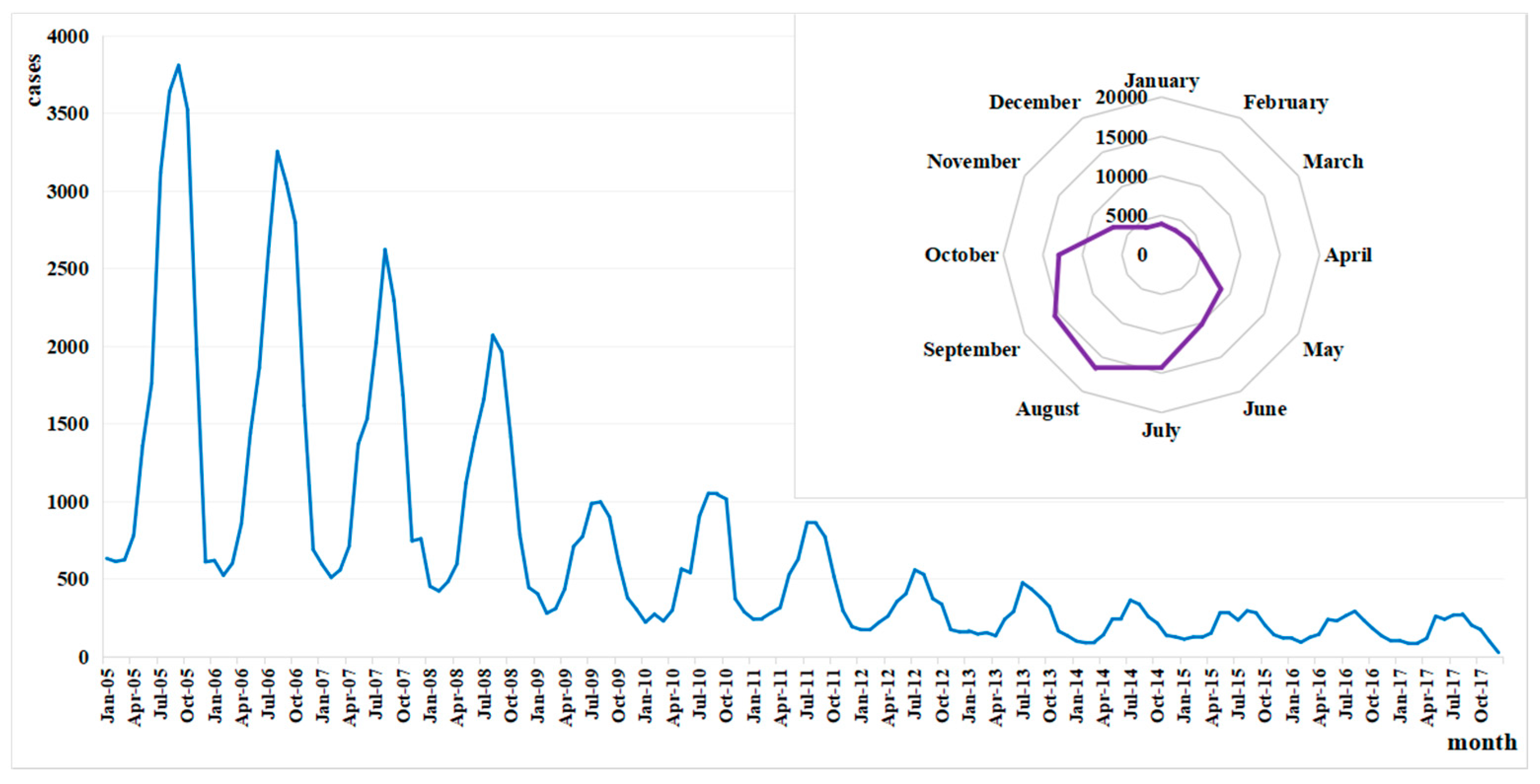 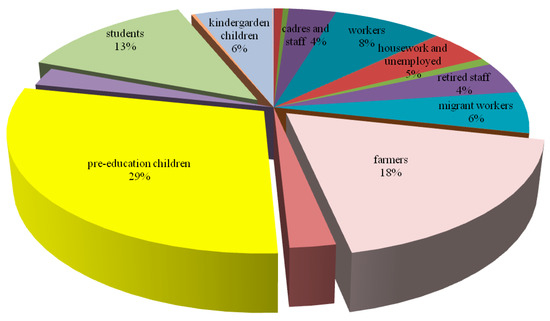 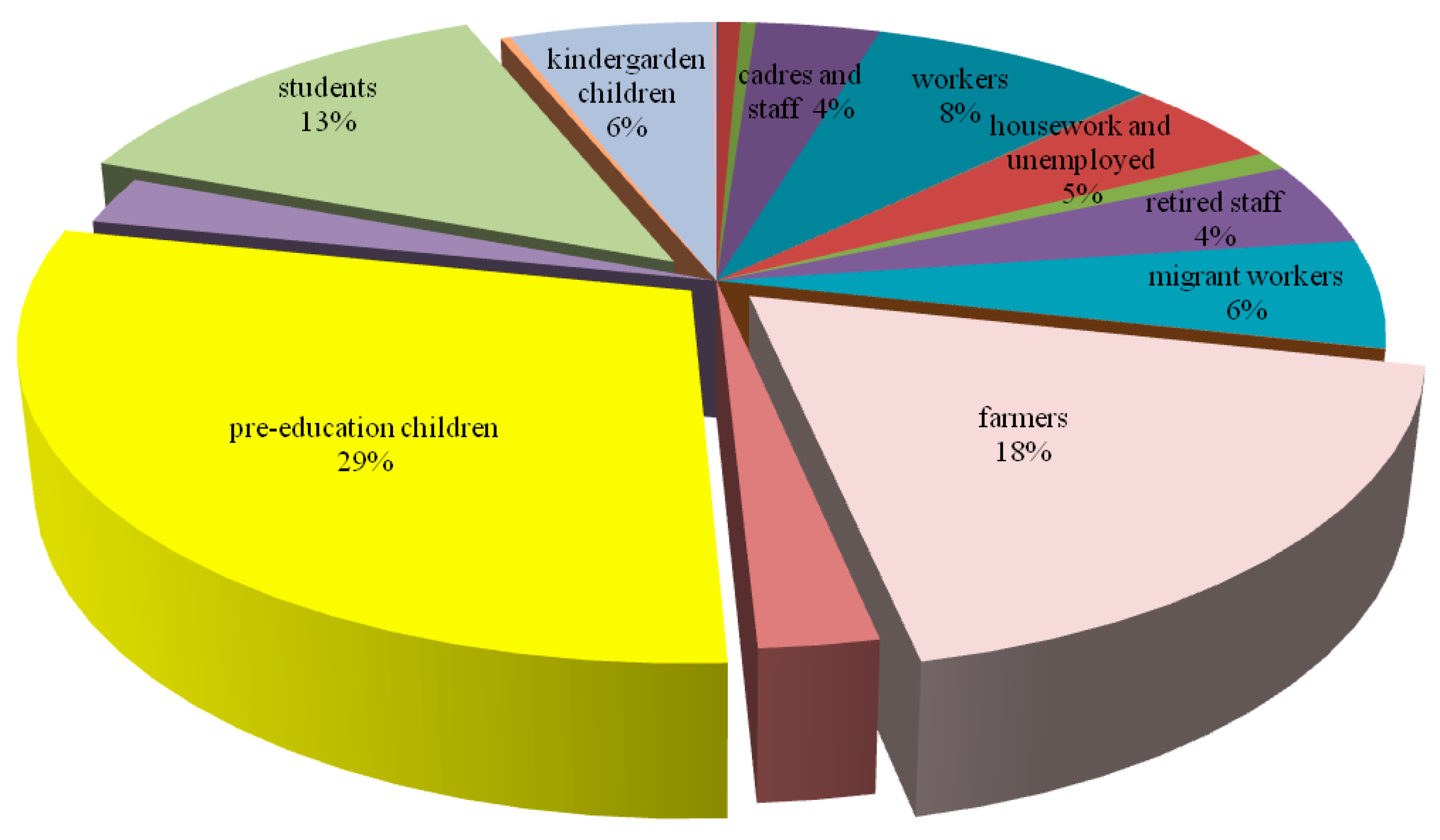 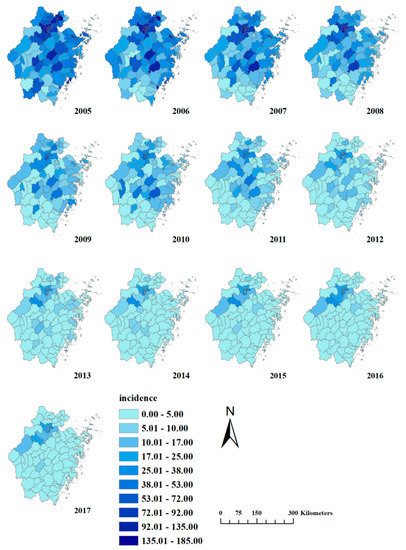 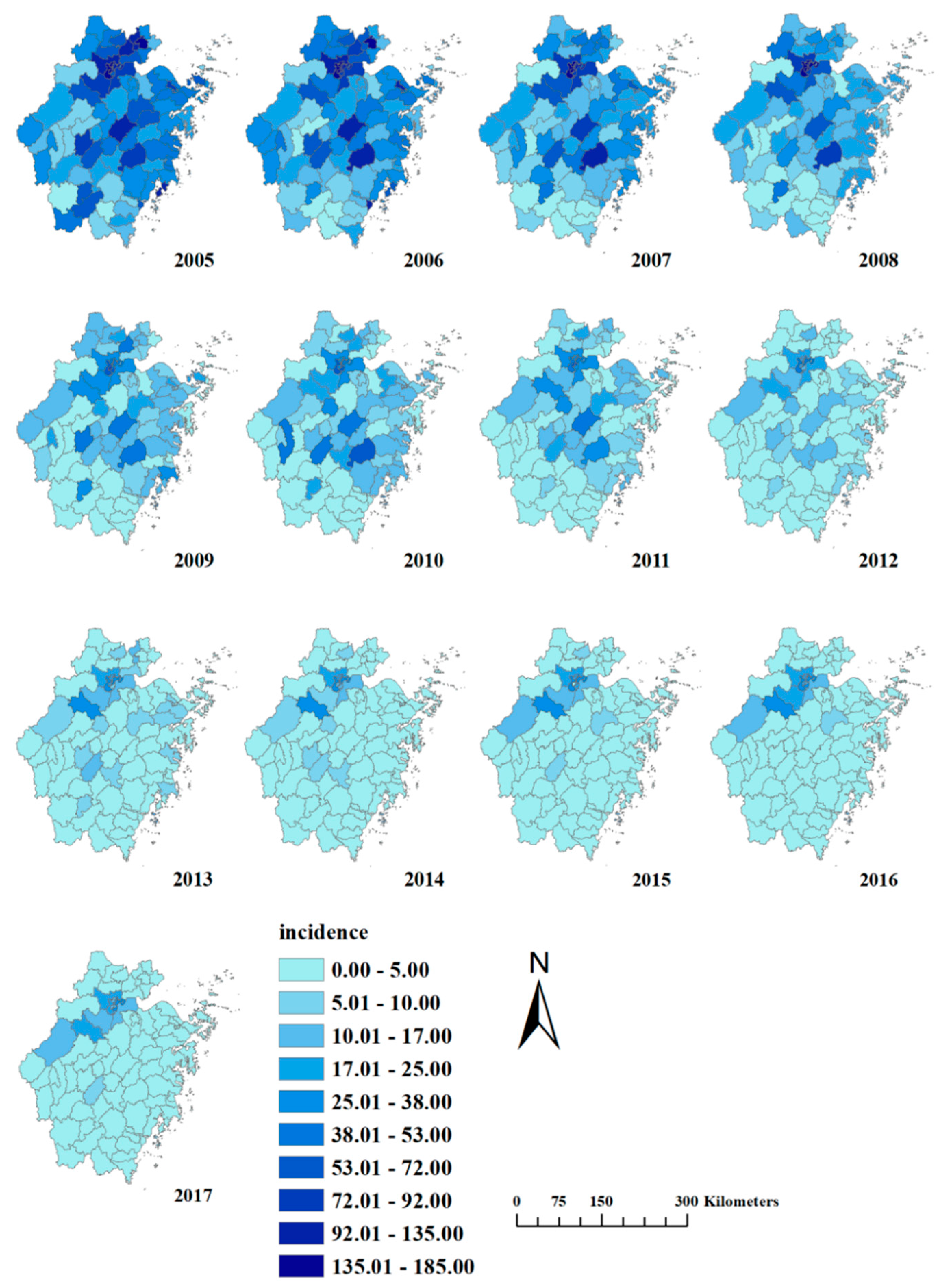 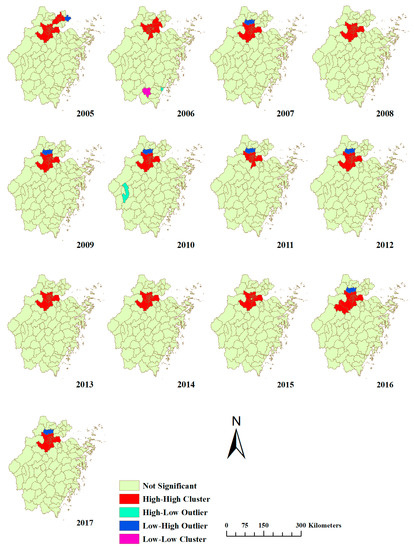 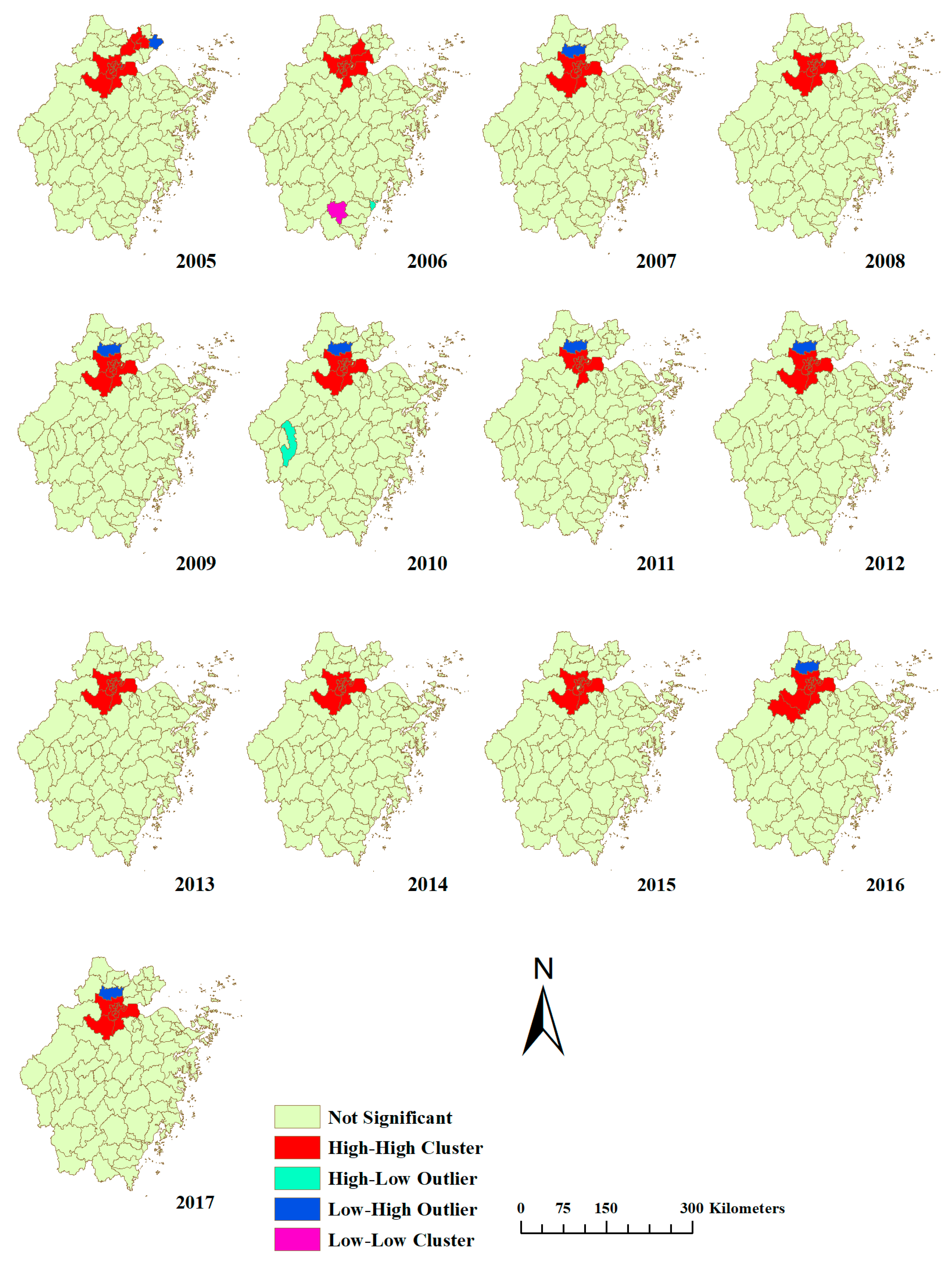 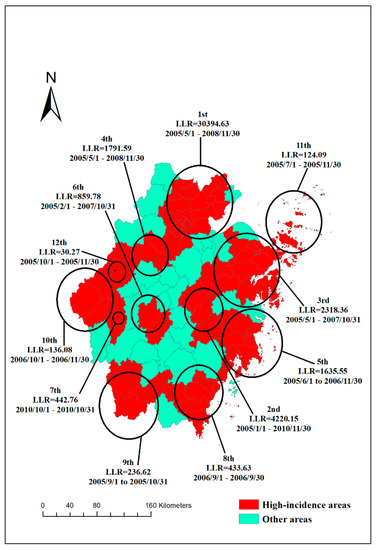 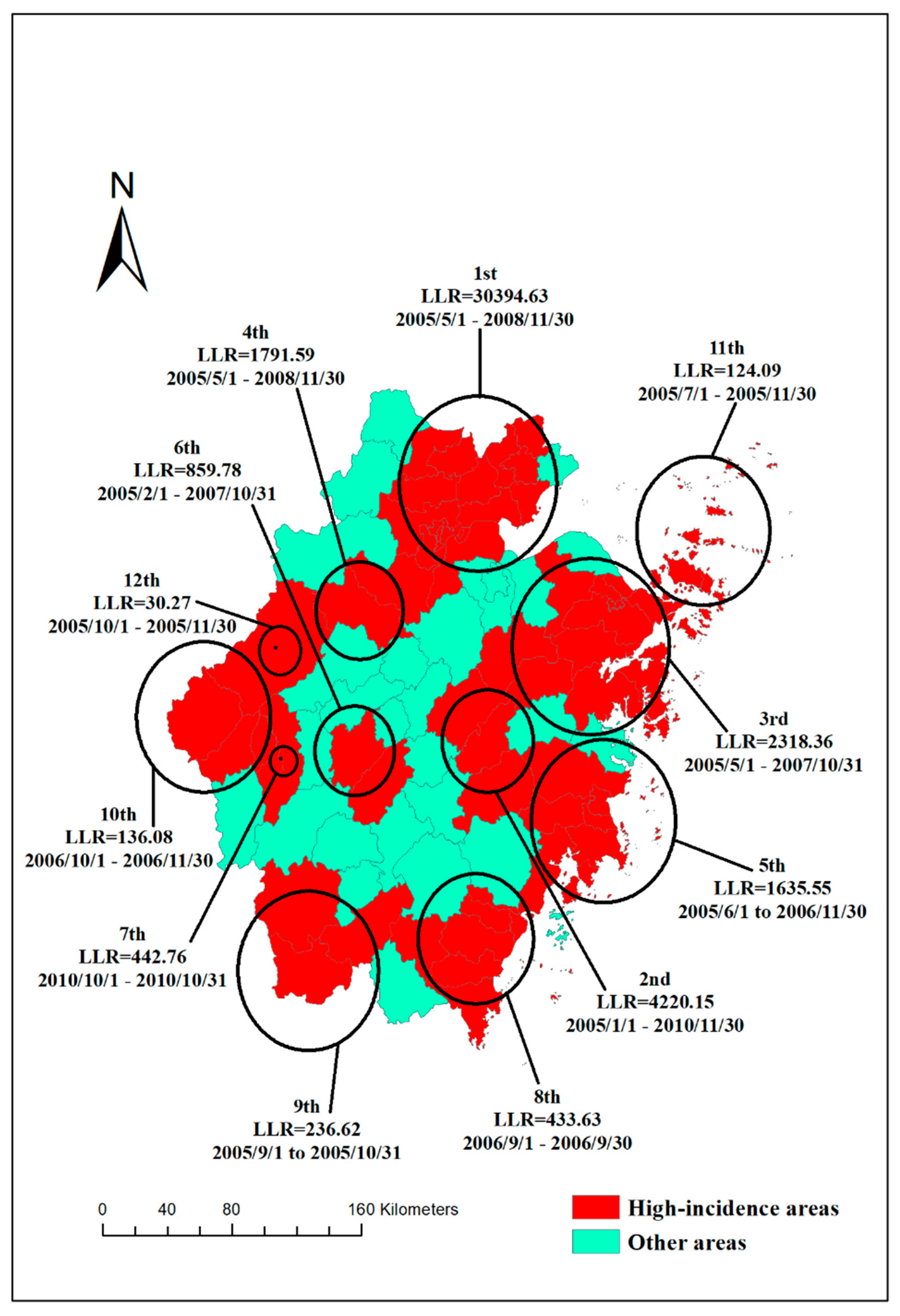