Inequities in Childhood Vaccination Coverage in Zhejiang, Province: Evidence from a Decomposition Analysis on Two-Round Surveys

The principal objective of this study was to determine whether the honeys produced in apiaries located in Pomeranian Voivodeship (Northern Poland) contain bacteria producing metabolites with growth inhibition potential against important human and animal pathogens. The pathogens included Staphylococcus aurues, Staphyloccocus epidermidis, Escherichia coli, Listeria monocytogenes, Pseudomonas aeruginosa, and Candida albicans. From 12 samples of honey, 163 strains of bacteria were isolated. Activity against reference staphylococci: S. aurues ATCC 25923; S. aureus ATCC 29213; S. epidermidis 12228 was observed in 33 (20.3%), 38 (23.3%), and 41 (25.1%) isolates, respectively. High inhibitory activity was also found against Listeria monocytogenes ATCC 7644 in 34 strains (20.9%). Activity against Candida albicans ATCC 10231 and especially Gram-negative bacteria: Pseudomonas aeruginosa ATCC 27857 and Escherichia coli ATCC 25922 was rarely observed. Production of metabolites exhibiting activity against the three pathogens mentioned above was confirmed for 13 (7.8%), 3 (1.8%), and 2 (1.2%) isolates, respectively. Forty-six isolates were selected for further analysis. Within this group, metabolites synthesized by 18 producing strains (39.13%) inhibited growth of only one of the reference strains of pathogenic microorganisms. However, 14 (30.44%), 8 (17.39%), and 6 (13.04%) strains produced agents active against three, two, and four pathogens, respectively. Sequencing of the 16S rRNA gene revealed that 80.4% of these 46 producing strains belong to the genus Bacillus. However, some producing strains belonging to the genus of Peanibacillus, Lysinibacillus, Microbacterium, and Staphylococcus were also identified. Furthermore, the analysis of the sequences of 16S rRNA, as well as RAPD-PCR, exhibited a significant diversity in the strains tested, even in the case of bacteria isolated from the same honey (and classified to the same genus, usually Bacillus spp.). This observation suggests environmental origin (nectar, water, or pollen) of the producing strains. The research carried out confirmed that honey produced in Northern Poland is a promising source of strains of bacteria producing metabolites with antimicrobial activity. View Full-Text
Keywords: honey; antimicrobial activity; growth inhibition potential; Bacillus honey; antimicrobial activity; growth inhibition potential; Bacillus
►▼ Show Figures 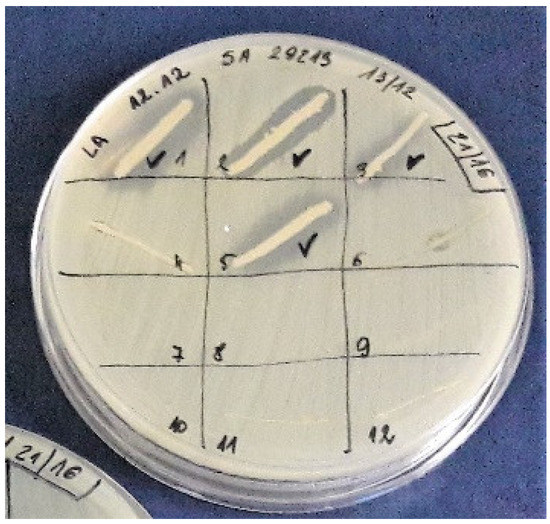