Influenza Vaccinations for All Pregnant Women? Better Evidence Is Needed
Next Article in Special Issue

Interventions to Improve Vaccination Uptake and Cost Effectiveness of Vaccination Strategies in Newly Arrived Migrants in the EU/EEA: A Systematic Review
Previous Article in Journal

The Effectiveness and Cost-Effectiveness of Hepatitis C Screening for Migrants in the EU/EEA: A Systematic Review

Studies in Europe have found that immigrants, compared to the local population, are more likely to seek out medical care in Emergency Departments (EDs). In addition, studies show that immigrants utilize medical services provided by EDs for less acute issues. Despite these observed differences, little is known about the characteristics of ED use by North African (NA) immigrants. The main objective of this study was to examine whether there were differences in ED discharge outcomes and psychiatric referrals between NA immigrants and Swiss nationals. A retrospective analysis was conducted using patient records from NA and Swiss adults who were admitted to the ED of the University Hospital in Bern (Switzerland) from 2013–2016. Measures included demographic information as well as data on types of admission. Outcome variables included discharge type and psychiatric referral. A total of 77,619 patients generated 116,859 consultations to the ED, of which 1.1 per cent (n = 1338) were consultations by NA patients. Compared to Swiss national patients, NA patients were younger, with a median age of 38.0 (IQR 28–51 years vs. 52.0 (IQR 32–52) for Swiss and predominantly male (74.4% vs. 55.6% in the Swiss). NA patient admission type was more likely to be “walk-in” or legal admission (7.5% vs 0.8 in Swiss,). Logistic regressions indicated that NA patients had 1.2 times higher odds (95% CI 1.07–1.40, p < 0.003) of receiving ambulatory care. An effect modification by age group and sex was observed for the primary outcome “seen by a psychiatrist”, especially for men in the 16–25 years age group, whereby male NA patients had 3.45 times higher odds (95% CI: 2.22–5.38) of having being seen by a psychiatrist. In conclusion differences were observed between NA and Swiss national patients in ED consultations referrals and outcomes, in which NA had more ambulatory discharges and NA males, especially young, were more likely to have been seen by psychiatrist. Future studies would benefit from identifying those factors underlying these differences in ED utilization. View Full-Text
Keywords: North African; immigration; health care; emergency department; disparities North African; immigration; health care; emergency department; disparities
►▼ Show Figures 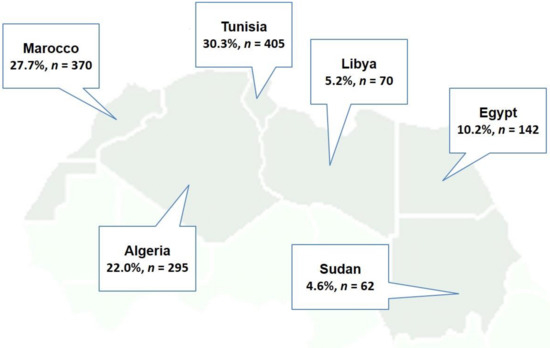