Activity-Friendly Built Environments in a Super-Aged Society, Japan: Current Challenges and toward a Research Agenda
Previous Article in Special Issue

Sleep Quality and Its Associated Factors among Low-Income Adults in a Rural Area of China: A Population-Based Study

Sleep is an important determinant of health because it is closely associated with mortality [1] and morbidity [2]. Poor sleep quality can lead to poor concentration and memory [3] as well as slow responses. According to the rural poverty standard of 2300 RMB [4] annual income per person of a household defined by the Chinese government, approximately 43.35 million Chinese people can be classified as belonging to the low-income population. This number accounts for 4.5% of the entire population according to the 2016 Statistical Communique on China’s national economic and social development [5]. In Hong Kong [6], 39.4% of adults reportedly experience poor sleep quality compared with 13.1% in Korea [7], 32.1% in Austria [8] and 16% in mainland China [9]. Nevertheless, population-based prevalence data on sleep quality among low-income Chinese adults in rural areas are limited.
Demographic factors, such as age, gender, education level, marital status, employment and living alone [3,9,10,11,12], have been linked to sleep quality. Other studies have also found that smoking has a dose-response relationship with sleep. Thus, higher tobacco consumption results in shorter sleep duration [13]. People who abstain from drinking alcohol have also been found to be more sleepless than those who drink moderate amounts [13]. Other factors, such as dietary habit, illness during the past two weeks, disability and physical diseases, have also been associated with poor sleep quality [13,14]. The majority of the previous studies on sleep quality and its related influencing factors were conducted in developed countries. However, cultural factors play an important role in sleep-related disturbances [15]. Thus, the findings obtained from Western countries may not be applicable to countries in the East due to their different social and cultural backgrounds. A few studies on the prevalence and associated factors of poor sleep quality [3,16] among the general Chinese population have been conducted, but low-income adults in rural areas have been overlooked. Moreover, previous studies failed to include other factors, thus leading to incomplete results and lack of credibility.
China’s rapid economic growth in recent years has led to various social problems, such as a large number of young people leaving rural areas, widening gap between the rich and the poor and rising divorce rates [17,18]. The effects of these changes on sleep quality in rural areas must be verified.
Thus, this study is designed to evaluate the prevalence and distribution of sleep quality as well as identifying the sociodemographic, lifestyle and health-related factors that affect it.

China is currently implementing a nationwide, targeted poverty alleviation program to eliminate poverty in rural areas. The government has implemented a strict registration system [4] for all low-income villagers to accurately identify the benefactors of this program. Ezhou City in central China, which consists of three counties, 25 townships and 286 villages, has a total population of 1.0685 million, 5.5% of which belongs to the low-income population of the rural area according to the data released by the Ezhou Bureau of Statistics in 2016. Our sample is mainly comprised of low-income adults (age ≥ 18 years) from the rural area of Ezhou City, who were identified by the group that is supervising the provincial poverty alleviation project.
A population-based, cross-sectional study was conducted from September 2017 to November 2017, while a multistage, systematic cluster sampling method was used to recruit the participants. Four towns were randomly selected from each county and three low-income villages were chosen from each town. A total of 7107 individuals were then randomly selected using the poverty registration system. After the exclusion of 8 individuals with psychiatric disorders, 12 with hearing impairment and dyslexia, 5 with dementia and 167 who refused to participate, the final sample was reduced to 6905 participants (with a response rate of 97.6%). The current cross-sectional data were collected entirely through questionnaires during face-to-face interviews in the homes of the participants as approved by the Research Ethics Board of Wuhan University Health Science Center (project identification code: JKGW20170202), which was carried out in accordance with the Helsinki Declaration of 1975. Moreover, written informed consent was obtained from each participant prior to the questionnaire.

Before data collection, eight investigators participated in workshops conducted by Wuhan University. The investigators explained the objectives and procedures of the study to potential participants through a telephone conversation. Upon obtaining the participants’ verbal consent, the investigators used the questionnaires to conduct face-to-face interviews in the participants’ homes.
A set of questionnaires on sociodemographic, lifestyle and health-related factors that are associated with sleep quality was used for data collection.
The sociodemographic and lifestyle data used as exploratory variables included gender, age, marital status, employment, average household income, educational level and living arrangements.
The lifestyle factors included are smoking and alcohol status (response to “yes” or “no”), salt intake (g/d), oil intake (g/d) and dietary content. Salt mainly comes from condiments, such as table salt, sodium glutamate and soy sauce. We used a validated Food Frequency Questionnaire (FFQ) [19] to collect information on salt and edible oil intake, dietary content and number of household members who consumed meals at home over the past month. First, we calculated the monthly salt intake of each household. Individual salt and edible oil intakes were calculated by dividing the number of household members by the salt and edible oil intake of the entire household per month. The level of salt intake was categorized into four groups (≤6, >6 and ≤12, >12 and ≤18, >18), while edible oil intake was also categorized into four groups (≤25, >25 and ≤35, >35 and ≤45, >45). Meanwhile, dietary content was categorized into balanced, primarily vegetarian or primarily meat diets.
Health-related factors mainly included illness during the past two weeks, number of chronic diseases and self-reported disability. Illness during the past two weeks was defined as a sickness lasting for the past two weeks.
The number of chronic diseases was assessed via the participant’s response (“yes” or “no”) when asked if he/she has been diagnosed with hypertension, diabetes, migraine, asthma, thyroid disease, heart disease, thrombosis, bronchitis/emphysema, osteoporosis, arthritis, cancer, stomach/peptic ulcer, cerebrovascular disease and other major physical diseases. This assessment is similar to what Scott described in a previous study [20].
Self-reported disability was assessed using four questions adopted from a previous study [21]. The participants were asked if they had any of the following permanent conditions: (1) vision or hearing limitations, such as blindness or severe vision impairment and deafness or severe hearing impairment; (2) functional limitations or substantial restriction from basic physical activities, such as walking, climbing stairs, reaching, lifting or carrying; (3) physical conditions that lasted for at least six months, resulting in difficulty remembering or concentrating; and (4) limitations in daily activities, such as dressing, bathing or getting around inside the home.
Subjective sleep quality was assessed via the Pittsburgh Sleep Quality Index (PSQI), which was developed by Buysse et al. in 1989 [22]. Thus, far, this scale is the most comprehensive and widely used sleep quality questionnaire. Moreover, previous studies [23] have proven its sensitivity, accuracy, comprehensibility and reproducibility. Tsai et al. [24] proved the reliability of the Chinese version of the Pittsburgh Sleep Quality Index (CPSQI), which was consistent with the present study that had a Cronbach’s alpha of 0.72. The CPSQI scale consists of 19 items that evaluate the sleep status in the previous month from multiple perspectives [13]. All items generate seven clinically derived sleep quality components, which are namely subjective quality, latency, duration, habitual efficiency, disturbances, use of medications and daytime dysfunction. The sum of these seven components is the global score of the CPSQI scale (range of 0–21), with lower scores indicating better sleep quality. Good and poor sleepers are distinguished via the diagnostic sensitivity and specificity of a total CPSQI score >5 (89.6% and 86.5%, respectively [3]). According to Buysse’s research [22], a total score of more than 5 has the best sensitivity and specificity for classifying poor sleep quality. In this study, a total CPSQI score of ≤5 was considered as good sleep quality, while a score of >5 was regarded as poor sleep quality.

The statistical software Stata version 10.0 (Stata Corporation, College Station, TX, USA) was used to calculate the overall percentage of poor and good sleepers among low-income adults in the rural areas of China. The descriptive statistics of mean and standard deviation (SD) were used for continuous variables, while frequency and percentages were used for categorical variables. We examined the binary association between sleep quality (categorical variable) and another categorical variable using the Chi-squared test. The odds ratio (OR) and 95% confidence interval (95% CI) of the association between different factors and sleep quality were analyzed via univariable logistic regression analysis. Ultimately, the association of sociodemographic, lifestyle and health-related factors with sleep quality were identified through multiple logistic regression. Statistical significance was set at p < 0.05 and all of the p values were two-sided.

3.1. Characteristics of Participants and Impact of Differences on Sleep Quality

3.2. Description of Sleep Quality and Its Components

Significant variables were included in the bivariate analysis for the final logistic regression model. As presented in Table 4 and Table 5, after adjusting for the age category, marital status, employment, average household income, living arrangement, educational level, salt intake, oil intake, dietary content of food, illness during the past two weeks, total number of chronic diseases and self-reported disability, we found that the age group was not a significant factor in determining sleep quality, except for participants aged 18–39 years (ORtotal: 0.46; and ORmale: 0.51; and ORfemale: 0.41). Married people had 29 percent lower odds of poor sleep than single people (ORtotal: 0.71). In terms of gender, only female married individuals had 49% lower odds of experiencing poor sleep quality than divorced individuals/widows/widowers (ORfemale: 0.51). For both males and females, respondents who were employed had lower odds of reporting poor sleep quality (ORtotal: 0.49; and ORmale: 0.49; and ORfemale: 0.48) compared with those who were unemployed. Participants with 1001–2300 RMB household annual income per person had 95% lower odds of experiencing poor sleep quality (1001–2300 RMB: ORtotal, 0.05; and ORmale, 0.05; and ORfemale, 0.06). The higher the education level, the lower the odds of poor sleep quality (illiterate: ORtotal, 1.51; elementary school: ORtotal, 1.45; and junior middle school: ORtotal, 1.39). A similar association was found only in females (illiterate: ORfemale, 2.15; elementary school: ORfemale, 1.93). Living arrangement was significant in association with poor sleep quality in unadjusted analysis, but the association attenuated to non-significance in the adjusted analysis. The probability of poor sleep quality in both genders decreased in those that were not physically disabled and with no more than one chronic disease. In addition, male participants who had a balanced or primarily vegetarian diet and had not been sick during the past two weeks were statistically less likely to have poor sleep quality.

Our study indicated that approximately 57% of low-income adults in rural areas experience poor sleep quality. The results suggested that sociodemographic, lifestyle and health-related factors are independently associated with poor sleep quality. Thus, comprehensive measures are necessary to improve sleep quality among low-income adults in rural areas. For example, educating them on the importance of a balanced diet and ways to reduce illness is reasonable and feasible. They can also be encouraged to appeal to local governments for help in improving their economic status. Furthermore, future studies with a large sample population that is sufficiently representative and with a larger number of variables can help to determine other related factors that affect sleep quality.

This research was funded by Ezhou center for disease control and Prevention (Grant No: 240100073).

We thank Qian Xie at the Wuhan University for data proofreading.

The authors declare no conflict of interest. The funding agency had no role in the design and execution of the study; the collection, management, analysis, and interpretation of the data; or the preparation, review, or approval of the manuscript. 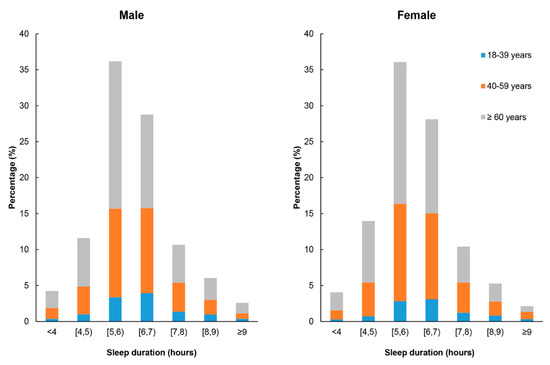 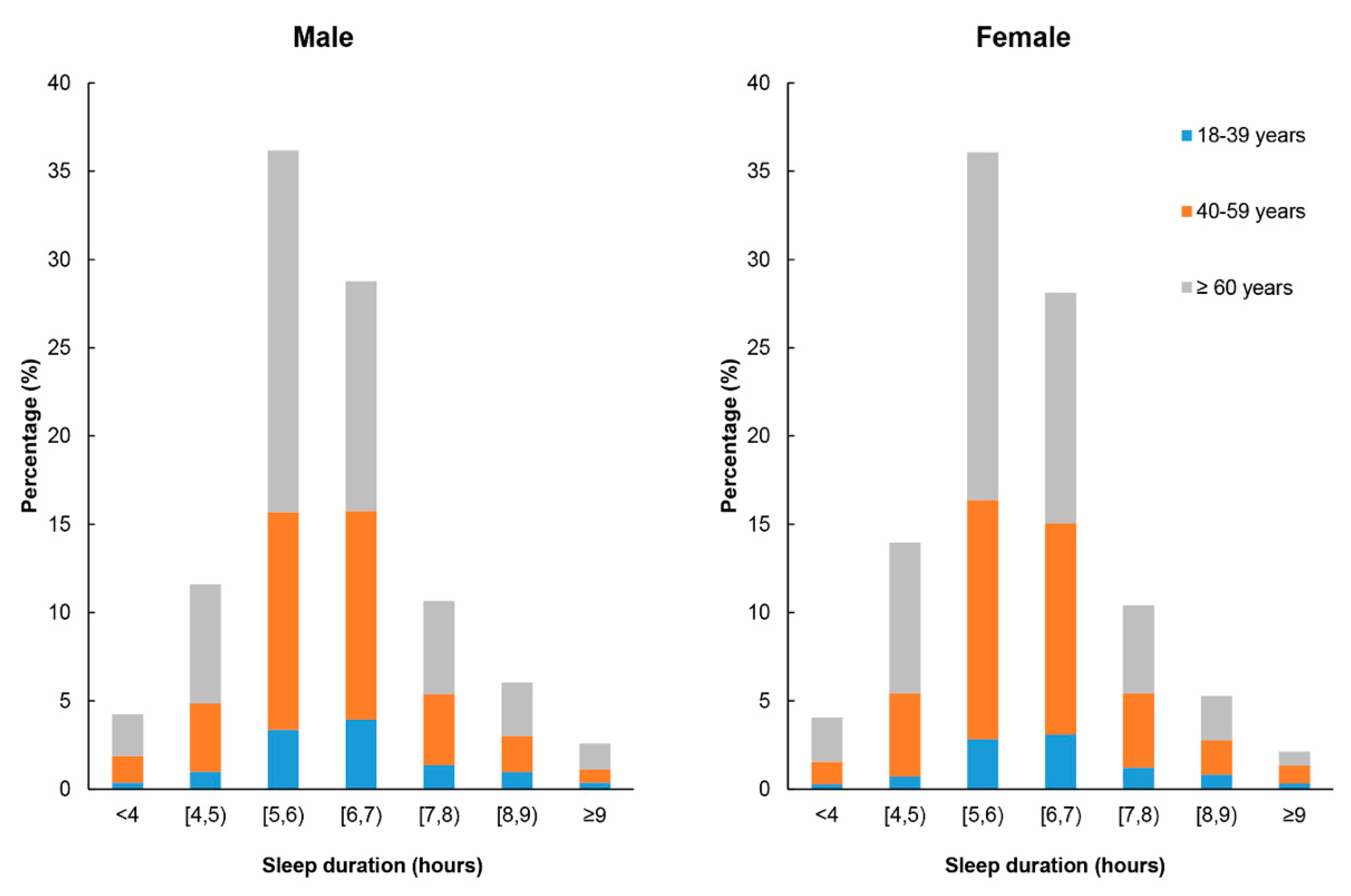 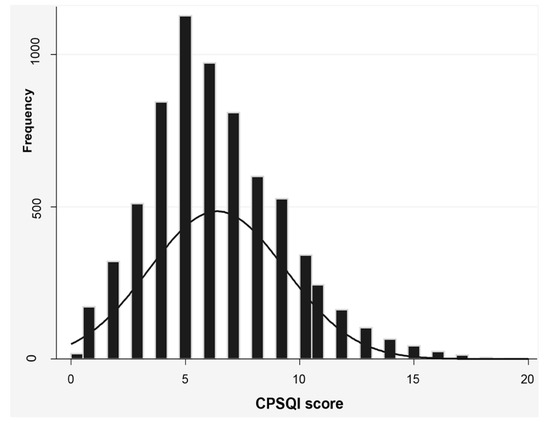 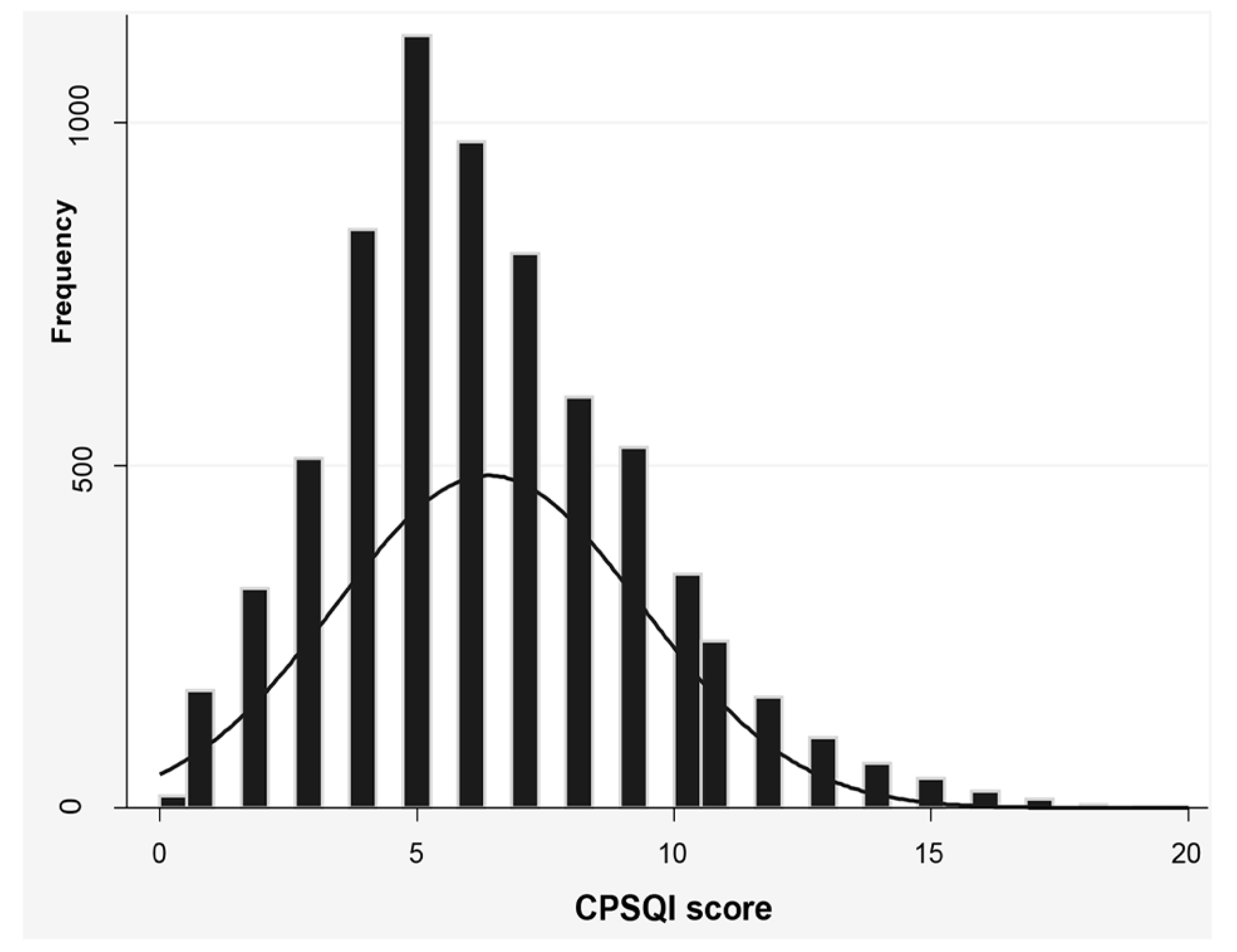