Distribution and Health Risk Assessment of Trace Metals in Soils in the Golden Triangle of Southern Fujian Province, China
Next Article in Special Issue

Breast Cancer and Exposure to Organochlorines in the CECILE Study: Associations with Plasma Levels Measured at the Time of Diagnosis and Estimated during Adolescence
Previous Article in Journal

Geographical Variation in Oral and Oropharynx Cancer Mortality in Brazil: A Bayesian Approach

Risk Assessment of Benzene, Toluene, Ethyl Benzene, and Xylene Concentrations from the Combustion of Coal in a Controlled Laboratory Environment

A D-grade type coal was burned under simulated domestic practices in a controlled laboratory set-up, in order to characterize the emissions of volatile organic compounds (VOCs); namely, benzene, toluene, ethylbenzene, and xylenes (BTEX). Near-field concentrations were collected in a shack-like structure constructed using corrugated iron, simulating a traditional house found in informal settlements in South Africa (SA). Measurements were carried out using the Synspec Spectras GC955 real-time monitor over a three-hour burn cycle. The 3-h average concentrations (in µg/m3) of benzene, toluene, ethylbenzene, p-xylene, and o-xylene were 919 ± 44, 2051 ± 91, 3838 ±19, 4245 ± 41 and 3576 ± 49, respectively. The cancer risk for adult males and females in a typical SA household exposure scenario was found to be 1.1 and 1.2 respectively, which are 110- and 120-fold higher than the U.S. Environmental Protection Agency (EPA) designated risk severity indicator (1 × 10−6). All four TEX (toluene, ethylbenzene, p-xylene and o-xylene) compounds recorded a Hazard Quotient (HQ) of less than 1, indicating a low risk of developing related non-carcinogenic health effects. The HQ for TEX ranged from 0.001 to 0.05, with toluene concentrations being the lowest, and ethylbenzene the highest. This study has demonstrated that domestic coal burning may be a significant source of BTEX emission exposure. View Full-Text
Keywords: coal; BTEX; hazardous air pollutants; domestic fuel burning coal; BTEX; hazardous air pollutants; domestic fuel burning
►▼ Show Figures 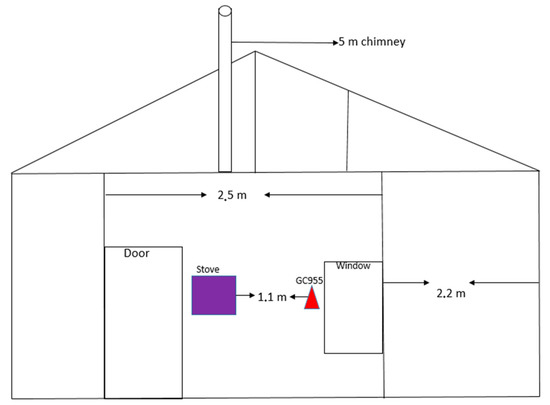