Sedentary Behavior: A Key Component in the Interaction between an Integrated Lifestyle Approach and Cardiac Autonomic Function in Active Young Men

This study aimed to verify the association between autonomic cardiac function (CAF) and the integration of caloric expenditure by physical activity (PA) intensity, sedentary behavior (SB), and sleep quality (PSQI) in active young men. Thirty-five subjects were included, and caloric expenditure in moderate-to-vigorous and light-intensity PA, SB, and PSQI were assessed using questionnaires. Heart rate variability (HRV) was recorded for short periods of time in the supine and orthostatic positions. Multiple linear regression was realized unadjusted and adjusted for covariables, such as age, body mass index, and fat mass. No adjusted analysis indicated that, in the supine position, there were negative associations between the SB and the TP, HF, and NorHF indices, and positive associations between SB and NorLF and LF/HF. In the orthostatic position, an interaction between SB and NorLF was found. Significance of proportion with the TP, HF, and LF/HF indices was confirmed. When adjusted, for the supine position, negative interactions were documented between SB and the TP as well as the HF indices, and between PSQI and the LF/HF index, with interference under the HF and LF/HF indices. Finally, our findings indicate that the proposed approach interacts with CAF, and SB is significantly related to CAF in young active men. View Full-Text
Keywords: physical activity; sedentary behavior; sleep quality; heart rate variability physical activity; sedentary behavior; sleep quality; heart rate variability
►▼ Show Figures 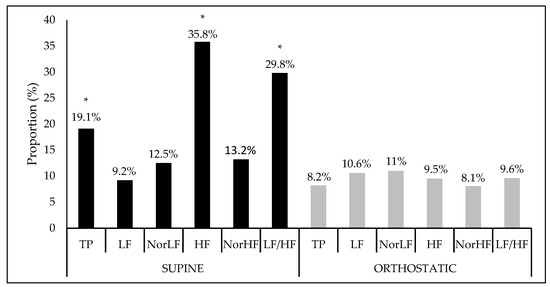