Improving Schools’ Readiness for Involvement in Suicide Prevention: An Evaluation of the Creating Suicide Safety in Schools (CSSS) Workshop

Background. Exposure to fictional suicide scenes raises concerns about the risk of suicide contagion. However, researchers and clinicians still lack empirical evidence to estimate this risk. Here, we propose a theory-grounded tool that measures properties related to aberrant identification and suicidal contagion of potentially harmful suicide scenes. Methods. The items of the Movies and Video: Identification and Emotions in reaction to Suicide (MoVIES) operationalize the World Health Organization’s recommendations for media coverage of suicide, and were adapted and completed with identification theory principles and cinematographic evidence. Inter-rater reliability (Cohen’s kappa) and internal consistency (Cronbach’s alpha) were estimated and optimized for two series of 19 and 30 randomly selected movies depicting a suicide scene. The validity of the scale in predicting identification with the suicidal character was tested in nine unknowledgeable participants who watched seven suicide movie scenes each. Results. The MoVIES indicated satisfying psychometric properties with kappas measured at 0.7 or more for every item and a global internal consistency of [α = 0.05]. The MoVIES score significantly predicted participants’ strength of identification independently from their baseline empathy ((β = 0.20), p < 0.05). Conclusions. The MoVIES is available to scholars as a valid, reliable, and useful tool to estimate the amount of at-risk components of fictional suicidal behavior depicted in films, series, or television shows. View Full-Text
Keywords: suicide; Werther effect; psychology of cinema; identification; emotion; vulnerability; imitation suicide; Werther effect; psychology of cinema; identification; emotion; vulnerability; imitation
►▼ Show Figures 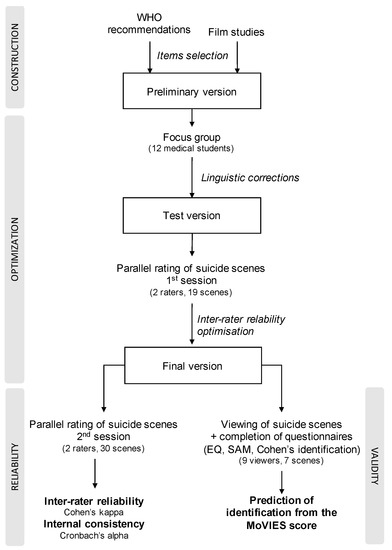