Daily Bicycle and Pedestrian Activity as an Indicator of Disaster Recovery: A Hurricane Harvey Case Study
Next Article in Special Issue

Does the Mode of Exercise Influence the Benefits Obtained by Green Exercise?
Previous Article in Journal

Effectiveness of Reverse vs. Traditional Linear Training Periodization in Triathlon

The aim of the present trial was to investigate the effect of two stretching programs, a dynamic and a static one, on the sprint ability of recreational volleyball players. The sample consisted of 27 male recreational volleyball players (age 21.6 ± 2.1 years, mean ± standard deviation, body mass 80.3 ± 8.9 kg, height 1.82 ± 0.06 m, body mass index 24.3 ± 2.5 kg.m−2, volleyball experience 7.7 ± 2.9 years). Participants were randomly divided into three groups: (a) the first performing dynamic stretching exercises three times per week, (b) the second following a static stretching protocol on the same frequency, and (c) the third being the control group, abstaining from any stretching protocol. The duration of the stretching exercise intervention period was 6 weeks, with all groups performing baseline and final field sprinting tests at 4.5 and 9 m. The post-test sprint times were faster in both the 4.5 (p = 0.027, η2 = 0.188) and 9 m tests (p < 0.001, η2 = 0.605) compared to the pre-test values. A large time × group interaction was shown in both the 4.5 (p = 0.007, η2 = 0.341) and 9 m tests (p = 0.004, η2 = 0.363) with the static and dynamic stretching groups being faster in the post-test than in the pre-test, whereas no change was found in the control group. The percentage change in the 4.5 m sprint time correlated with volleyball experience (r = −0.38, p = 0.050), i.e., the longer the volleyball experience, the larger the improvement in the 4.5 m sprint. Thus, it is concluded that both stretching techniques have a positive effect on the velocity of recreational male volleyball players, when performed at a frequency of three times per week for 6 weeks under the same conditions as defined in the study protocol. View Full-Text
Keywords: dynamic stretching; static stretching; velocity; volleyball; warm-up dynamic stretching; static stretching; velocity; volleyball; warm-up
►▼ Show Figures 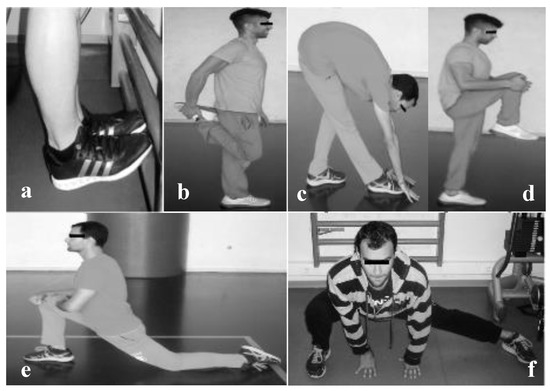