Submit to IJERPH Review for IJERPH 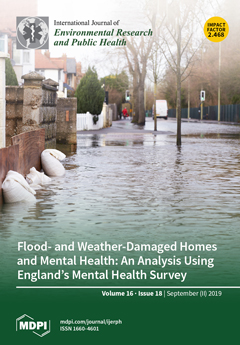 Cover Story (view full-size image): Climate change is increasing the risk of flooding in countries like the UK. The economic costs are well-established. However, floods and other extreme weather events also take a toll on people’s mental health. Because these events are unpredictable in timing and location, much of the evidence comes from small-scale studies of people whose homes have been damaged. To complement this evidence, we need larger representative surveys with robust measures of the mental health of both exposed and non-exposed populations. Our paper provides this wider perspective. View this paper
Previous Issue
Volume 16, September-1
Next Issue
Volume 16, October-1
We use cookies on our website to ensure you get the best experience. Read more about our cookies here.
Accept
We have just recently launched a new version of our website. Help us to further improve by taking part in this short 5 minute survey here. here.
Never show this again