Noise-induced hearing loss (NIHL) is a common form of hearing loss inin industrial countries. In particular, enhanced exposure to noise in work places can result in hearing loss. The number of patients with NIHL has greatly increased, making it a significant public health problem. The World Health Organization estimates that 1.1 billion young people worldwide could be at risk of hearing loss [1].
The mechanisms of NIHL comprise both direct mechanical damage and metabolic damage. Excessive noise can cause damage to middle ear structures, round and oval window membranes, and the organ of Corti. The outer hair cells of the cochlea are highly vulnerable to noise exposure. Noise can distort the stereocilia of hair cells, causing defects in mechanotransduction. Free radicals (e.g., reactive oxygen species) can damage the cell membrane through necrosis or apoptosis of neighboring cells [2].
Several compounds have been developed to protect against NIHL; however, there is no commercially available drug yet. Retinoic acid (RA), an active metabolite of vitamin A, enables hearing recovery in mouse models of NIHL. RA can inhibit the JNK pathway of apoptosis [3], which is activated in stressed inner ear cells [4]. Another study has shown that RA-induced peroxiredoxin 6 expression can contribute to recovery from noise-induced temporary hearing threshold shift [5]. RA plays various roles in cell induction, differentiation, and development [6]; RA binds to RA receptors (RAR) and retinoid x receptors (RXR), both of which serve as potential therapeutic targets in the inner ear. RAR α and λ transcripts are found in the organ of Corti and the spiral ganglion whereas RAR β1 transcripts are found in mesenchymal-derived tissue in the inner ear of mice [7]. Notably, RAR α and λ are required for inner ear development and have an essential role in the initial differentiation in mice [8].
In this study, we examined the effect of selective administration of RAR agonists to prevent NIHL.

C57BL/6 mice (6–7 weeks old; Orient Bio, GyeongGi province, Korea) were housed and maintained according to the Yonsei University Health System animal research requirements; all procedures were approved by the Yonsei University Health System Institutional Animal Care and Use Committee (IACUC Approval Number 2017-0181). Mice were fed ad libitum and housed in cages in an environmentally controlled room under a 12-h light cycle. A total of 40 mice were used, 8 mice per group, randomly distributed.

White noise (300–10,000 Hz) was generated by a personal computer and an amplifier (R-399, Inter M, Seoul, Korea) and delivered through speakers (290-8L, Altec Lansing, Oklahoma City, OK, USA) in a noise booth. Mice were continuously exposed to 110 dB peak equivalent SPL for one 3-h session. It was considered that noise exposure of 110 dB SPL for 3 h is reasonable to induce NIHL based on a review of the literature [5,9].

ATRA, AM80 (RAR α agonist), AC261066 (RAR β1 agonist), CD1530 (RAR λ agonist), and dimethylsulfoxide (DMSO, control) were used to prevent cochlear damage during noise exposure. They were all dissolved in DMSO at final concentrations of 20 mmol. ATRA and each selective agonist were administered to mice 1 day before noise exposure and 2 h before noise exposure via intraperitoneal (IP) injection. The control groups underwent IP injection of DMSO or water ( 60 µL).

One week after noise exposure, mice were euthanized with CO2 gas and the cochlea was quickly removed from each mouse. A whole mount preparation of the cochlea was performed. All cochlear tissues were separated into apical, middle, and basal turns. After dissection, middle turn was immunostained with fluorescently tagged antibodies. The rabbit myosin 7a antibody was used as primary antibody to stained cochlear hair cells, and 4′,6-diamidino-2-phenylindole (DAPI) was used to counterstain nuclei. All cochlear turns were examined under a Zeiss LSM 700 confocal microscope [10,11]. Outer hair cells were counted and compared between groups.

Noise-induced hair cell damage is critical in that it results in temporary or permanent hearing loss. In mammals, damaged hair cells are difficult to regenerate; once a permanent threshold shift has developed, it cannot be repaired. Studies regarding RA treatment for NIHL have shown preservation of hearing in mouse models of permanent and temporary threshold shift. Previous studies have revealed that noise exposure induces the JNK pathway in inner ear cells. JNK is a protein kinase activated by cellular stress; it activates phosphorylation of c-Jun, which mediates the initiation of apoptosis. RA inhibits the induction of JNK, leading to the inhibition of apoptosis in the inner ear hair cells [3,5].
A recent study showed ATRA-induced peroxiredoxin 6 (Prdx6)-associated recovery from NIHL. Increased expression of Prdx6 protects cells from membrane damage associated with peroxidation [5]. Increased Prdx6 protein expression was observed early after noise exposure; it remained elevated for 24 h. The RAR-related orphan receptor α1 is associated with Prdx 6 expression. RAR α functions as a transactivator of Prdx6 gene expression. These findings suggest that selective RAR agonists have specific roles, which differ among each other.
Our results also suggest that temporary noise exposure not only damages hair cells but also decreases auditory neuronal responses, which is referred to as amplitude in wave I in ABR. Decreased amplitude of wave I in ABR after noise exposure is consistent with the previous result that cochlear synaptopathy and the followed cochlear nerve degeneration is associated with temporary NIHL [12,13]. Although hearing threshold in ABR is completely recovered after temporary noise exposure, there is still a decrease in synaptic vesicles in inner hair cells and it may cause hidden hearing loss, which is a potential risk factor for age-related hearing loss in the later. Notably, the present data show that ATRA and selective RAR agonists ameliorate decrease in wave I amplitude in ABR. In this regard, ATRA or selective RAR agonists could be a potential target for the prevention of NIHL after temporary noise exposure.
As mentioned above, RAR distribution in the developing inner ear is quite different. RAR α is predominantly expressed in the developing sensory epithelium, RAR β in inner ear mesenchymal tissues, and RAR γ in the differentiating otic capsule. In an adult mouse, RAR α and RAR γ transcripts are found in the organ of Corti and the spiral ganglion, whereas RAR β transcripts are localized in mesenchyme-derived tissues. However, our result showed no differences between RAR agonist-treated groups. All selective RAR agonists can protect hair cell from noise, especially at high frequencies. There were no statistical differences at Day 7 of the experiment (6 days after noise exposure). We assume that it was a result of small sample size and unexpected loss of mice during the experiment. We performed IP injection with dissolved agonists in DMSO. DMSO is a well-known solvent that can solubilize a wide variety of molecules. We also confirmed that DMSO did not have any effects to cochlea, by comparing with water injected group to rule out placebo effect. There was no difference between water and DMSO groups in ABR threshold, wave I amplitude and hair cell survival rate (Supplementary Figure S1). However, there have been reports regarding the unexpected low-dose toxicity of DMSO [14,15]. During our experiments, some mice were lost in both control and agonist groups for unknown reasons.
Our data did not show any differences between selective RAR agonists; however, other studies have shown that selective RAR agonists can serve as therapeutic options in many diseases. Selective RAR α agonists have therapeutic potential for the treatment of immune diseases, cancer, and Alzheimer’s disease [16]. Selective RAR α agonists have shown inhibition of tumor proliferation, as well as induction of tumor cell apoptosis, in murine models [17]. In T-cell lymphoma, RAR α overexpression augmented chemosensitivity to retinoids and AM80 administration inhibited cell growth, which may indicate a therapeutic target in some peripheral T-cell lymphomas [18]. In addition, the selective RAR α agonist AM80 showed a neuroprotective effect in a mouse model of intracerebral hemorrhage. AM80 decreased activation of macrophages affected by oxidative stress. Treatment with AM80 also decreased the area of nitrotyrosine immunoreactivity [19]. Another study showed that nitrotyrosine immunoreactivity can be induced by noise; notably, increased nitrotyrosine expression in outer hair cells caused apoptosis in a guinea pig model [20]. Therefore, it is highly possible to apply selective RAR α agonist against NIHL.

RA and selective RAR agonists exert protective effects in NIHL, such that outer hair cells are preserved. Given that most of the environmental noise are in the level of transient threshold shift, we considered that retinoic acid receptor agonists could be utilized to prevent transient shift and relieve the related tinnitus symptom. Regardless of differences among RAR agonists, they all demonstrate protective effects, especially during exposure to high-frequency noise, and may serve as therapeutic agents for NIHL.

The following are available online at https://0-www-mdpi-com.brum.beds.ac.uk/1660-4601/16/18/3428/s1. Figure S1: Data from placebo group with water (n = 3) was compared with that from placebo group with DMSO (n = 3). A. in post-noise day 7, wave I amplitude in auditory brainstem response (ABR) did not differ between two groups. B. ABR threshold by click stimuli after noise exposure were not significantly different between two groups over time.

S.H.K. performed the whole animal experiments and was a major contributor in writing the manuscript. All authors read and approved the final manuscript. G.-S.N. and S.H.B. participated in the work of histological examination by microscope. J.J. as corresponding authors, designed the experiment. 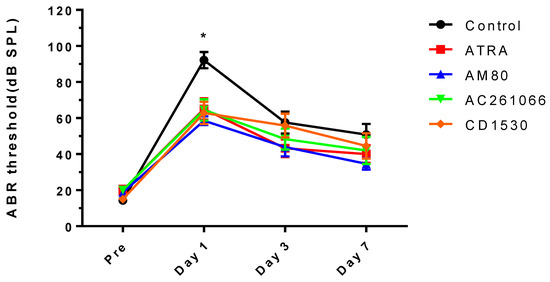 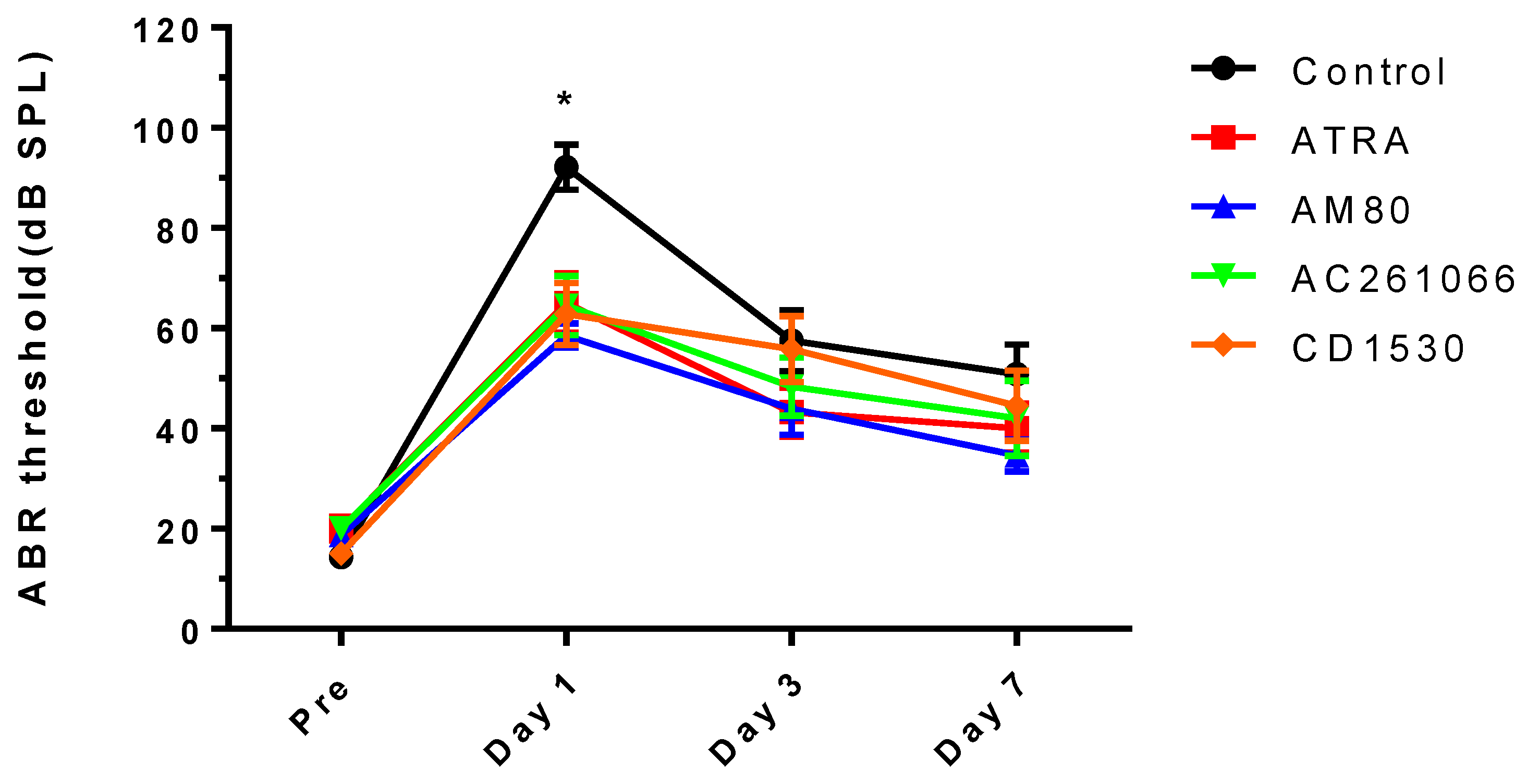 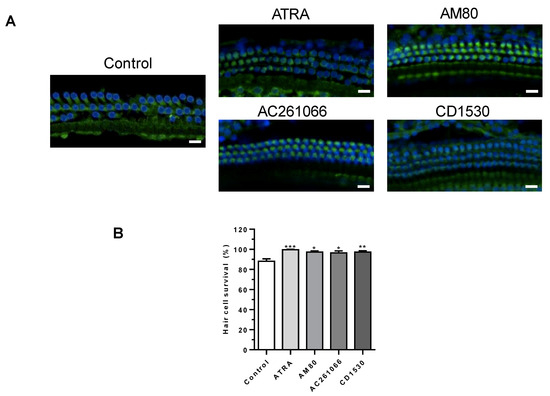 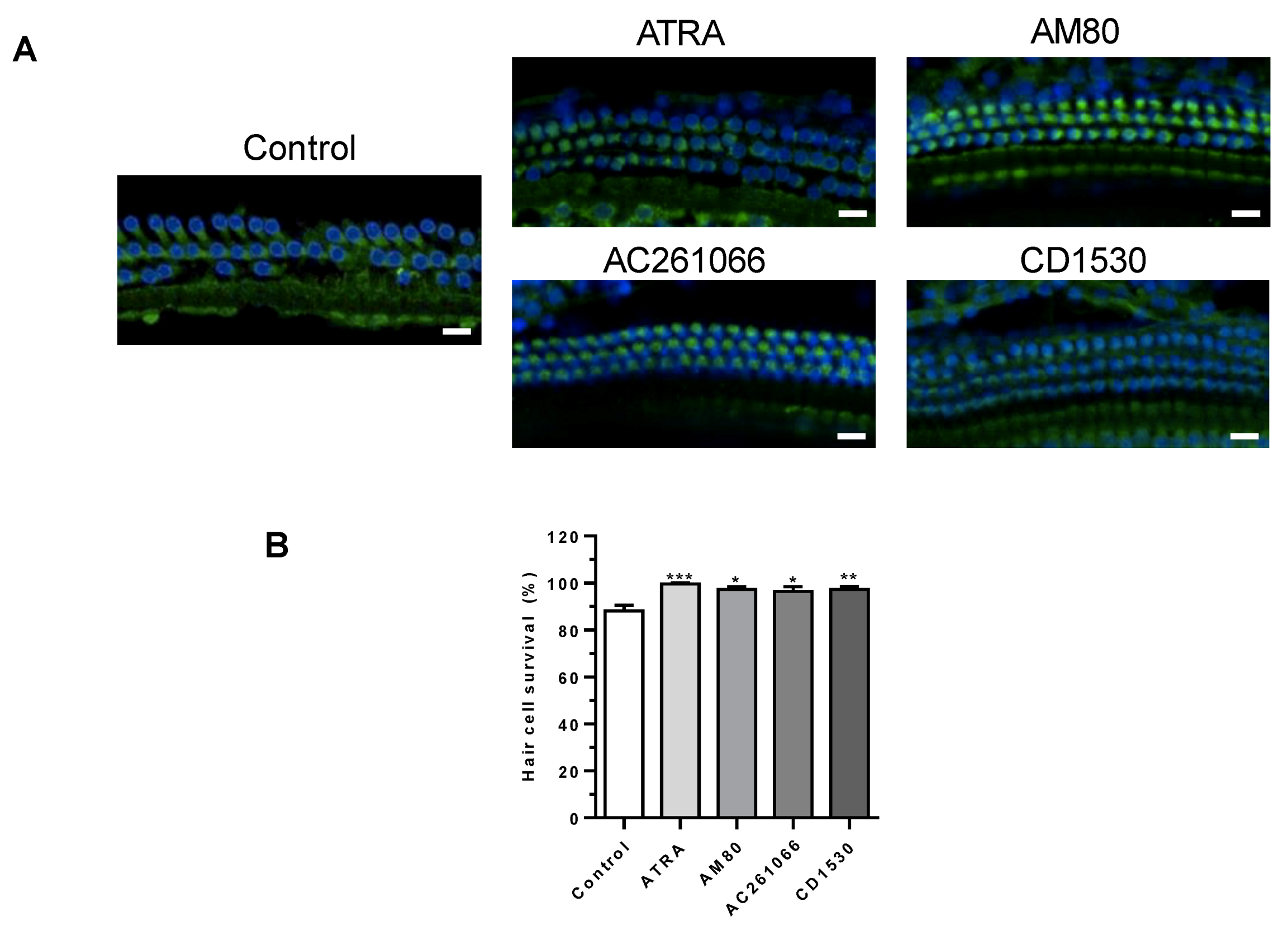