The aim of the study was to analyze the microbiological biodiversity of human foot skin with respect to factors such as age, gender, frequency of foot washing and physical activity, and to select indicator species to be considered when designing textile materials with antimicrobial properties used for sock and insole production. The experiment was carried out on a group of 40 people. The number of microorganisms was determined using culture-dependent methods. Biodiversity was determined using culture followed by genetic identification based on 16S rRNA gene sequencing (bacteria), ITS region (fungi), or using Illumina next-generation sequencing (in a group of eight selected individuals). The total bacterial number on women’s feet was on average 1.0 × 106 CFU/cm2, and was not statistically significantly different than that of men’s feet (mean 1.2 × 105 CFU/cm2). The number of bacteria, in most cases, decreased with age and with increased frequency of physical activity. The number of bacteria increased with diminishing feet-washing frequency; however, statistically significant differences were found between groups. The number of fungi was not significantly different amongst groups. Bacteria belonging to the phyla Firmicutes, Proteobacteria and Actinobacteria constituted the main microorganisms of the foot skin. Ascomycota and Basidiomycota predominated amongst the fungi. The presence of specific species varied in groups depending on the factors mentioned above. Two of the species identified were classified as pathogens (Neisseria flavescens and Aspergillus fumigatus). These findings suggest that it is necessary to extend the list of microorganisms tested on textiles with respect to hygienic properties. View Full-Text
Keywords: microorganisms; foot skin; biodiversity; high-throughput sequencing microorganisms; foot skin; biodiversity; high-throughput sequencing
►▼ Show Figures 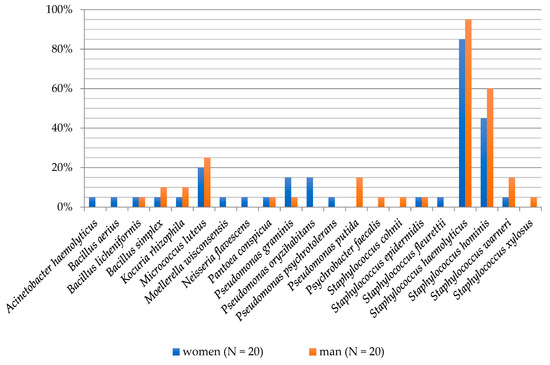