Organised Physical Activity in the Forests of the Warsaw and Tricity Agglomerations, Poland
Previous Article in Special Issue

Using Mosses as Bioindicators of Potentially Toxic Element Contamination in Ecologically Valuable Areas Located in the Vicinity of a Road: A Case Study

This study analyzed the impact of road transportation on the concentration of Zn, Ni, Pb, Co, and Cd in moss (Pleurozium schreberi). The study was carried out over five years near a national road running from the north to the east (Poland) in the area of Natura 2000 sites. Samples were collected at three significantly different locations: (1) near a sharp bend, (2) near a straight section of the road in a woodless area, and (3) in a slightly wooded area. At each location, moss samples were collected from sites situated 2, 4, 6, 8, 10, 12, and 14 m from the road edge. The highest Zn and Cd contents in the moss were recorded 6 m from the road edge near a sharp bend (where vehicles brake sharply and accelerate suddenly). At the same location, at a distance of 2 m, the highest Pb concentration was noted, and at a distance of 4 m from the road, the highest Ni concentration was noted. The Co concentration in the moss was the highest near the woodless straight section at a distance of 2 and 12 m from the road. The concentrations of Zn, Pb, Ni, Co (only at the woodless location), and Cd (at all locations) were significantly and negatively correlated with distance from the road.
Keywords: bioindicators; road transportation; potentially toxic elements; Pleurozium schreberi bioindicators; road transportation; potentially toxic elements; Pleurozium schreberi

Potentially toxic elements are a group of harmful chemical compounds accumulated in the environment as a result of anthropogenic factors [1,2,3,4]. Their excessive concentration has an adverse effect both on human health and on particular components of the natural environment [5]. Road transportation, alongside industry and agriculture, is the main anthropogenic source of environmental pollution with potentially toxic elements [6,7,8]. The transportation impact on the environment is multidirectional and primarily concerns air, water, and soil conditions; biodiversity disturbances; area development; noise; and vibration hazards. The development of the automotive industry in recent decades has contributed to an increase in the emissions of toxic exhaust fume components, including potentially toxic elements. Car exhaust fumes as well as rubber microparticles from tires and brake linings generate characteristic dustiness at locations with a high traffic volume [9]. Cars are responsible for 10–25% of dust emissions, and their contribution to contamination is even greater due to the phenomenon of secondary dusting caused by car wheels [10]. Road transportation is among the main sources of air pollutant emissions that pose a threat to the natural environment as well as to human health and lives. Fuel combustion, operation fluid leakage, and the wear of brake pads, clutch plates, road surfaces, and tires lead to the emission of gases, liquids, and dusts containing potentially toxic elements such as Pb, Cd, Ni, Zn, Cu, and Co [11,12]. These emissions can be transported over various distances depending on the geographical area and meteorological factors, including fog, wind, and rain [13]. The spatial distribution of contamination with toxic elements caused by road transportation also depends on the organization of road traffic and road infrastructure. For example, in Poland, road infrastructure occupies approximately 3% of the country’s land area, but approximately 50% of Poland’s land area is within the range of direct impacts from transportation pollution [14].
Biomonitoring can be applied to assess the effect of road pollutants on particular components of the natural environment. Research carried out in this field enables a determination of the type, scale, and rate of adverse changes and the preparation of a forecast for expected environmental pollution. Bioindicators are used for both qualitative and quantitative assessments of environmental conditions and the degree of environmental transformation (to indicate measurable morphological, anatomical, and physiological changes). Mosses are recognized as one of the main bioindicators and biomonitors of air pollution, including those originating from road transportation. In Poland, a species frequently used for air quality control is the moss Pleurozium schreberi (Brid.) Mitt. Mosses are commonly found worldwide and have a large surface area in relation to their weight [15]. Mosses have no roots and take up most of the nutrients from (wet and dry) precipitation. They are capable of accumulating potentially toxic elements over a long period of time up to very high concentrations [16] that are determined by the moss species [17]. The concentration of potentially toxic elements in exposed moss samples results from two basic processes, i.e., dust retention on the plant surface and the take-up of substances in their ionic form. With regard to dry deposition, potentially toxic elements remain practically inactive and are absorbed mechanically. However, when high concentrations of acidifying gases and precipitation occur at the same time, the bioaccumulation of more readily soluble ionic potentially toxic elements forms increases. P. schreberi mosses have also been rather widely used in biomonitoring research worldwide: in Albania [18], China [19], Finland [20], North America [21], Sweden [15], the Ural region [22], Canada [23], and Poland [24,25,26]. However, long-term monitoring studies with mosses are not frequently performed. It is important to assess how transportation emissions affect environmental pollution along a road depending on different landforms, afforestation densities, and limits of vehicle speed.
The aim of this study was to assess the effect of road transportation on potentially toxic element (Zn, Pb, Ni, Cd, and Co) contents in samples of the moss P. schreberi, which were collected over five years of research along a national road in northeastern Poland located within an ecologically valuable area (Natura 2000). The main objectives of this study were (1) to determine the spatial distribution of toxic elements in moss along a national road, and (2) to analyze the effect of the distance from transportation emissions at a specific location near the road on the content of potentially toxic elements in moss.

In this study, selected potentially toxic element contents were analyzed in moss (P. Schreberi) samples collected at three locations situated along National Road No. 53 between Olsztyn and Szczytno (northeastern Poland) near Lake Kosno, where the road marks the northern boundary of the Lake Kosno Landscape Reserve. This enclave is a part of the Napiwodzko–Ramucka Refuge and is a site of community importance (the Natura 2000 program). The road is characterized by a high average traffic volume of approximately 5000 cars per day, of which 80% are passenger cars.
Sample collection and storage was carried out in line with European moss network guidelines [22]. Moss samples were collected over five years (2014–2018) in July, each time at three sampling points (Figure 1). Table 1 presents the meteorological conditions in the sampling points of the region in July. The locations differed in landform, afforestation density, and limit of vehicle speed. Location 1 (53°40′12.3″ N; 20°42′38.4″ E) was situated near a sharp bend (a thin pine forest). The travel speed is limited here to 40 km·h−1 (at other sampling points to 90 km·h−1). The terrain is flat. Up to 19 m from the road, there is a rare spruce forest that passes further into a dense pine and spruce forest. Location 2 (53°40′15.9″ N; 20°41′51.0″ E) was situated close to a straight road section and is characterized by a high scarp (40 m long) near the road (the slope toward the road was 20°). The terrain is woodless and covered by grass. The thick forest is 50 m from the edge of the road. Location 3 (53°40′6.7″ N; 20°42′18.3″ E) lay at the site of a forest clearing with a surrounding thin pine forest. The terrain gently slopes off the road by 3°. Similarly to location 2, research points were located close to a straight road section (high speed of vehicles).
In this area, winds from the southwestern and western directions prevail. At each location, moss samples were collected from sites situated 2, 4, 6, 8, 10, 12, and 14 m from the road edge. Each sample consisted of 10 subsamples (0.5 g for each one) taken over an open space area of 1 × 0.1 m (collected parallel to the road) and mixed to make a single, representative sample. Moss samples were collected at locations at least seven meters away from the nearest tree trunk to avoid direct exposure to throughfall. In total, 1050 moss samples were collected, of which 105 representative samples were prepared. Samples were stored and transported to the laboratory in tightly closed paper bags.

Green parts of mosses were dried at room temperature. The plant samples were homogenized to a fine powder in a Retsch-type ZM300 (Hann, Germany) laboratory mill. Microwave digestion (MARS6, CEM Corporation, Matthews, USA) in nitric acid (HNO3 65%, suprapure) was used for total digestion of the moss samples. The total contents of Zn, Ni, Pb, Co, and Cd were determined using the flame atomic absorption spectroscopy (FAAS) method with a SpectrAA 240FS spectrometer (VARIAN, Mulgrave, Australia). The detection limits were 0.09, 0.26, 0.48, 0.24, and 0.20 μg·g−1 for Cd, Co, Ni, Pb, and Zn, respectively. Ultrapure water (Merck, Darmstadt, Germany) with 0.055 µS·cm−1 resistivity was used for preparing the working standard solutions and sample dilutions. All glass and polyethylene flaskware had been previously treated in 5 mol·L−1 HNO3 for 24 h and then rinsed with ultrapure water. Calibration of the spectrometer was performed with a standard solution from Merck (Darmstadt, Germany). The accuracy of the potentially toxic element analysis using FAAS was checked through an analysis of the reference materials (BCR-482, BCR-414). The concentrations of Cd, Ni, Pb, and Zn that were recovered were satisfactory, ranging from 94% to 109%.

This research was funded by a project financially supported by the Minister of Science and Higher Education in the auspices of the program entitled “Regional Initiative of Excellence” for the years 2019–2022, Project No. 010/RID/2018/19 (amount of funding 12,000,000 PLN). 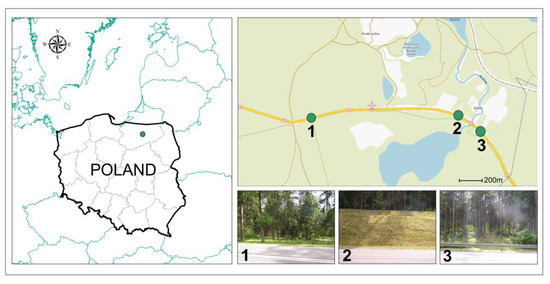 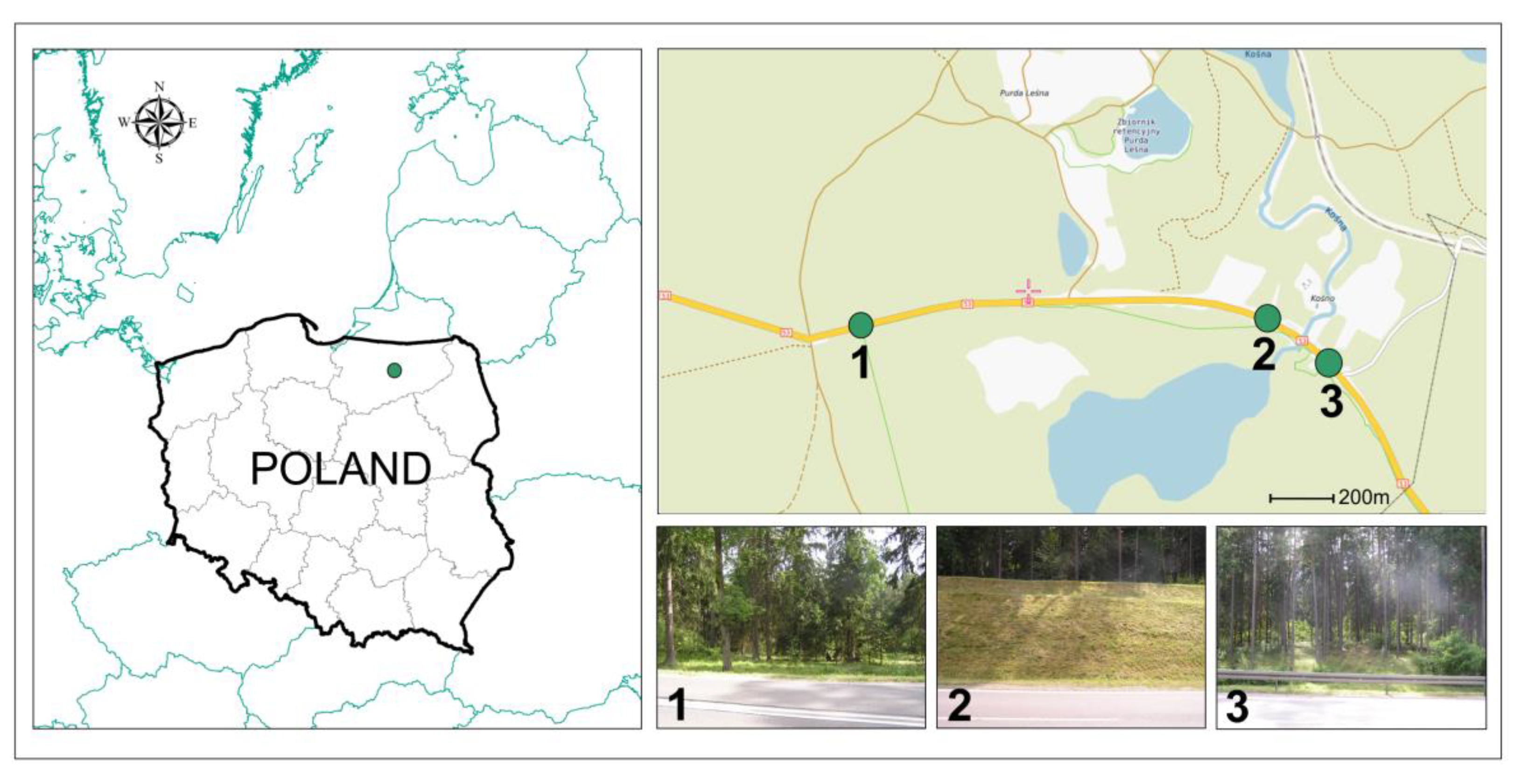 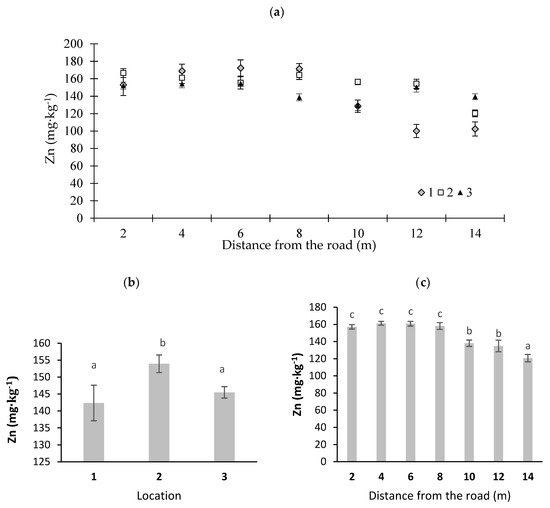 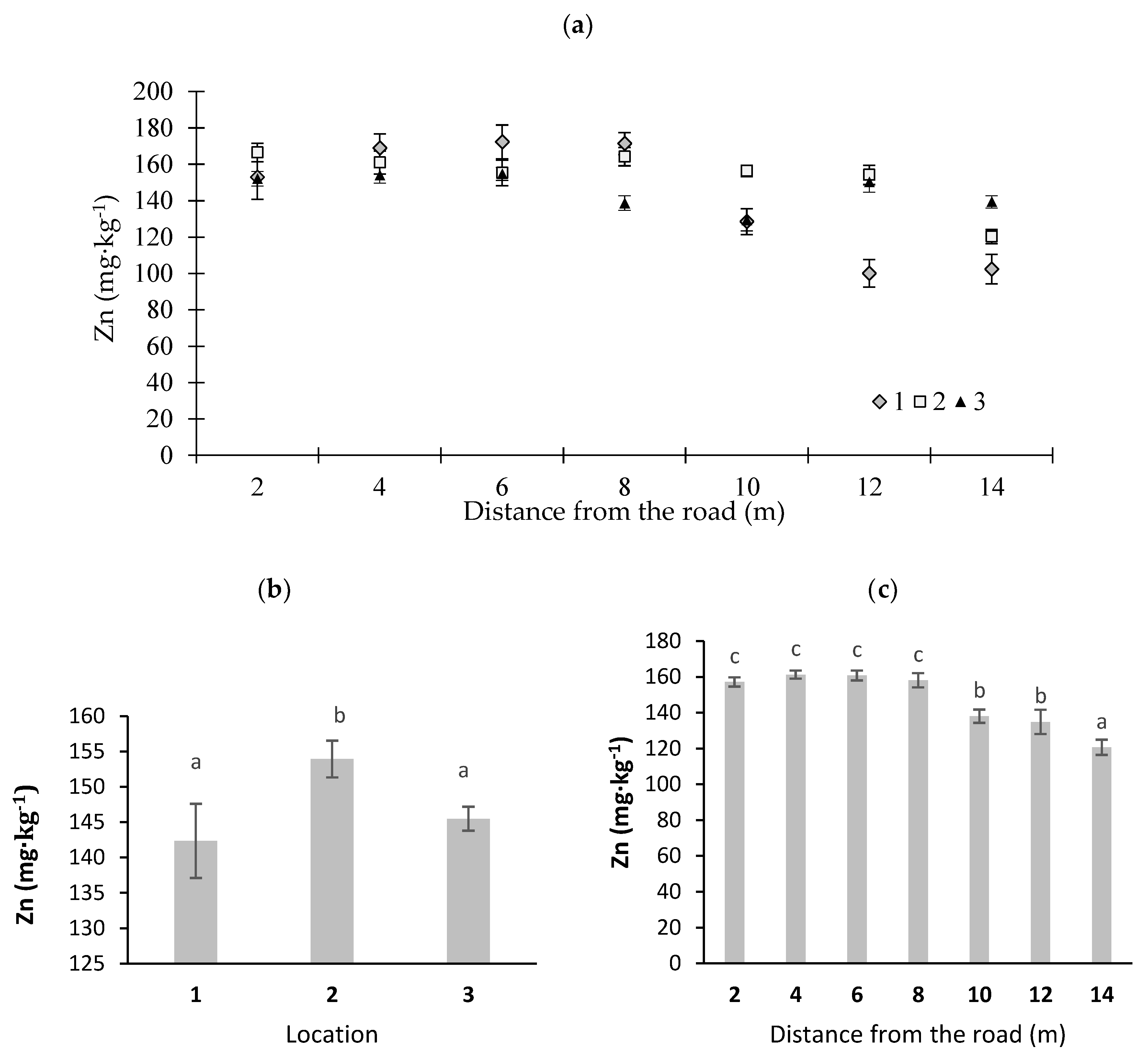 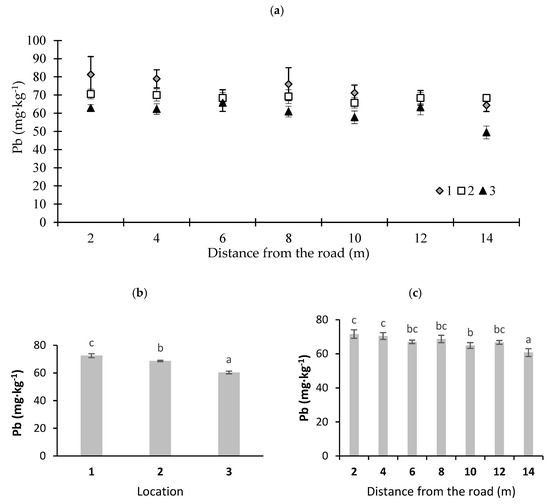 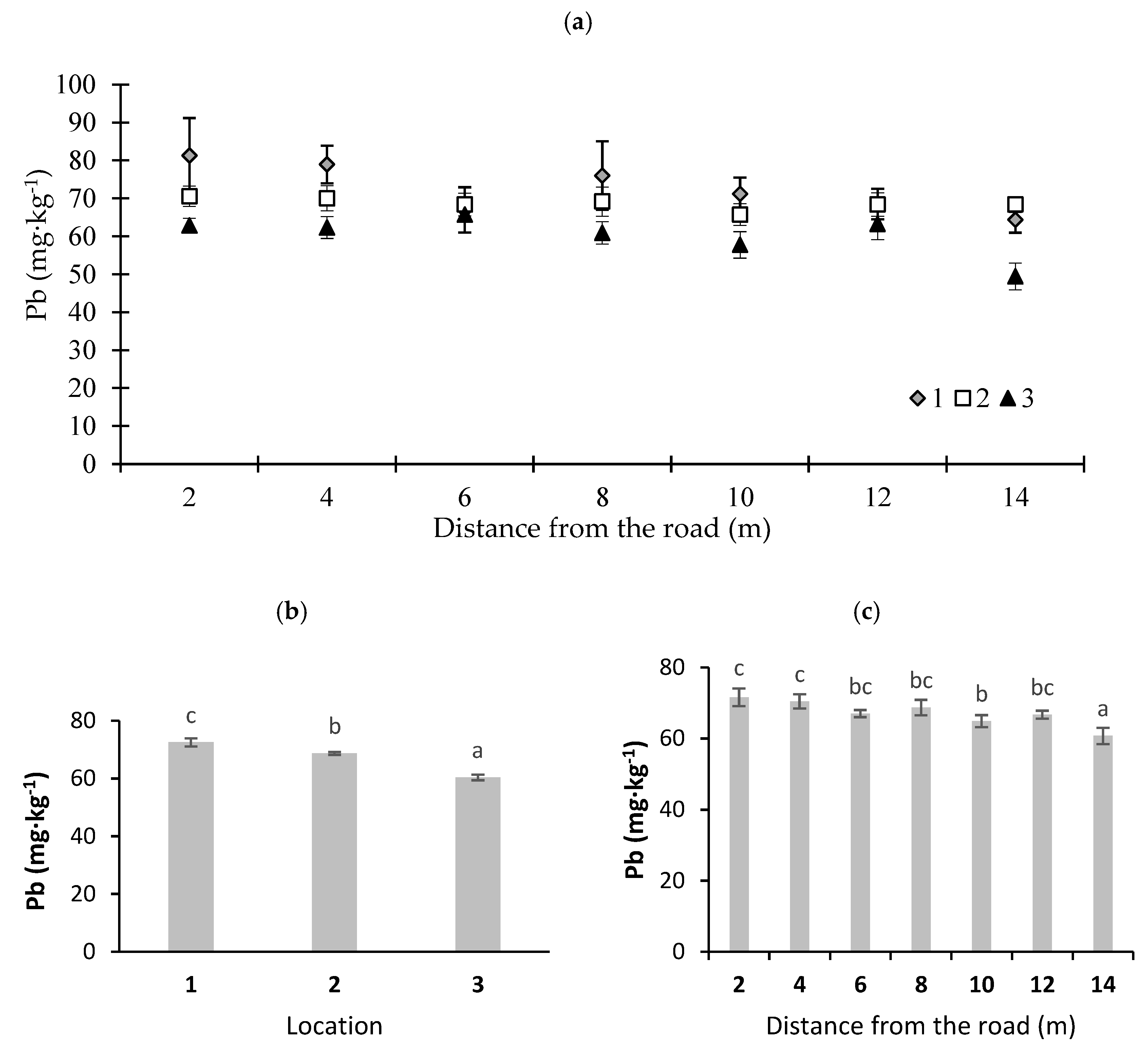 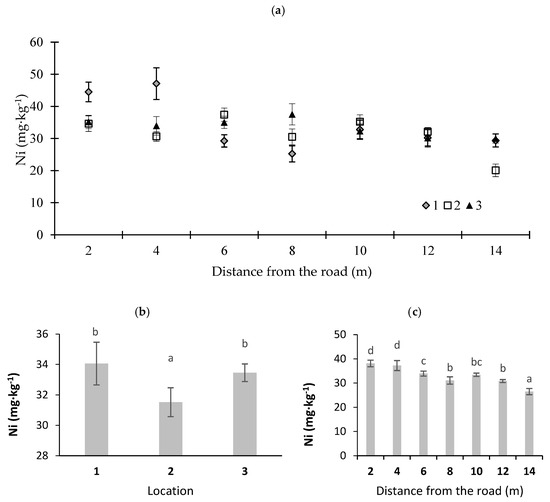 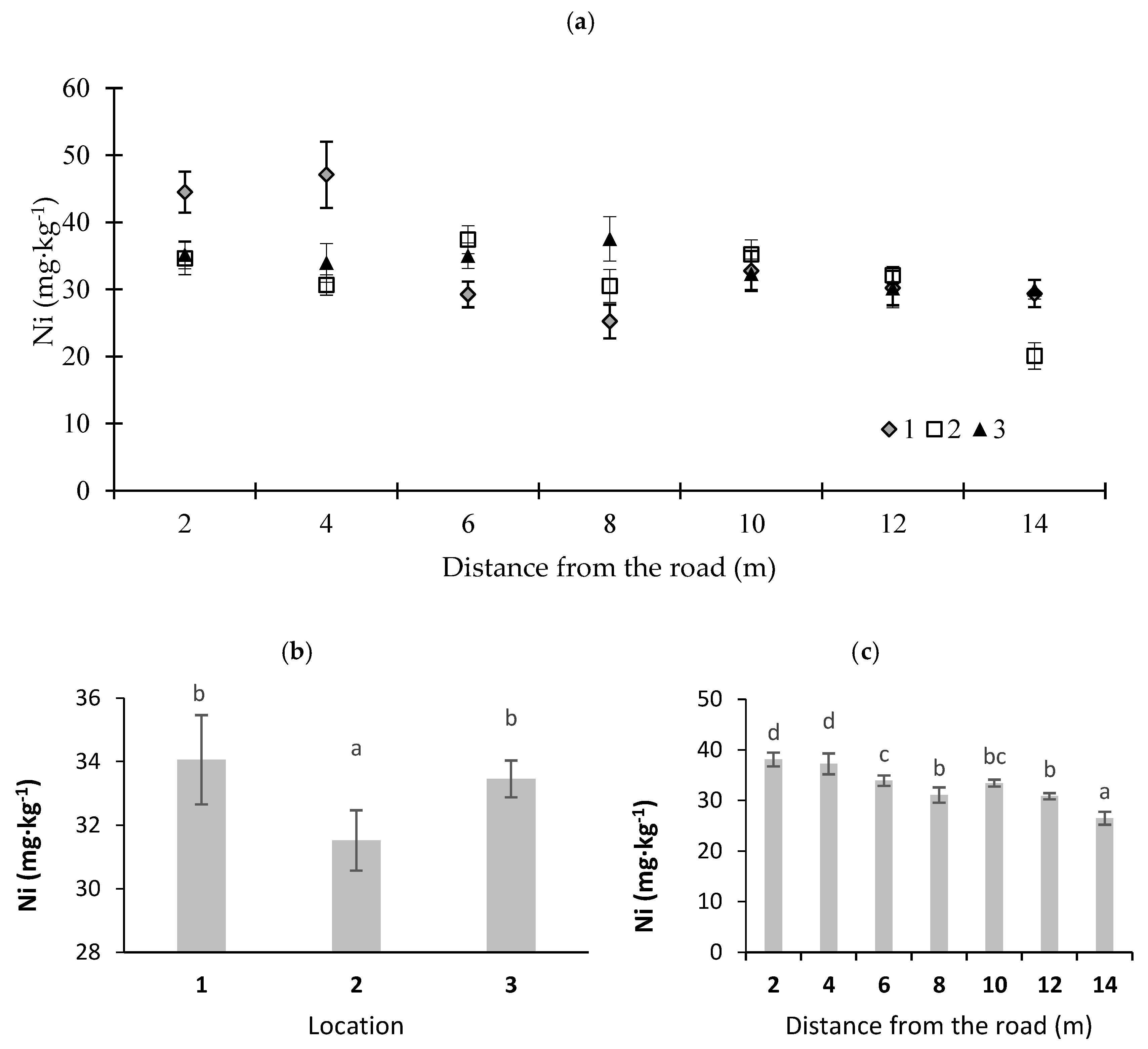 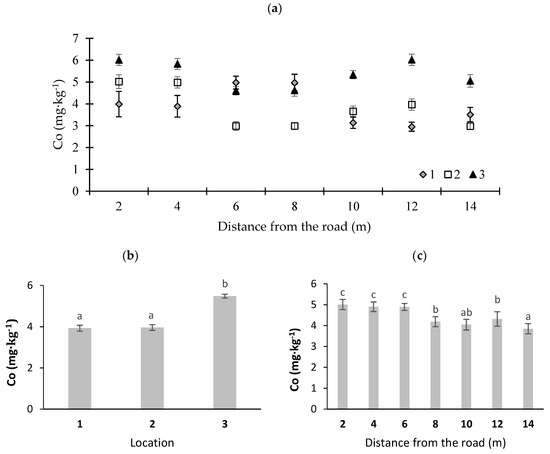 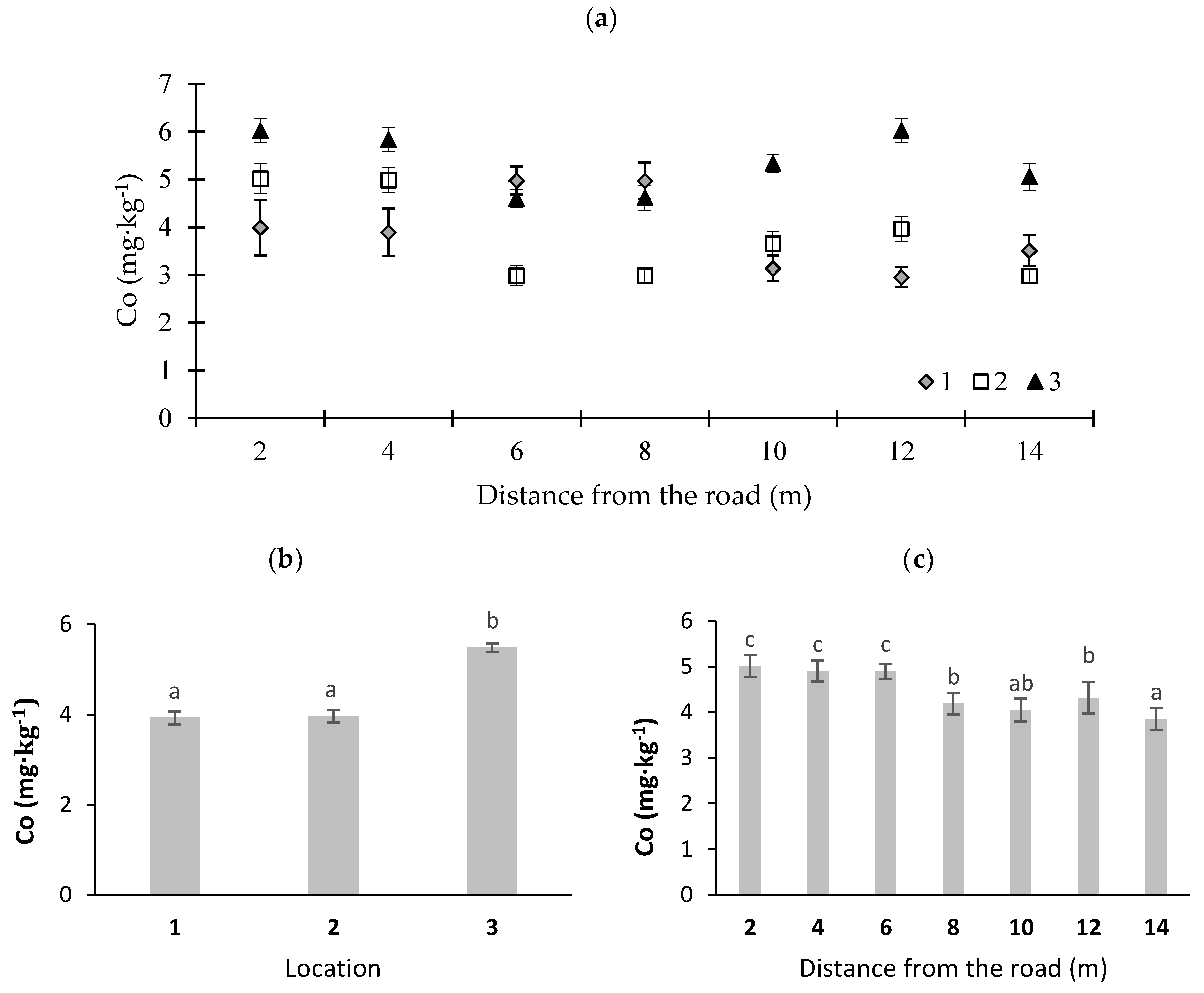 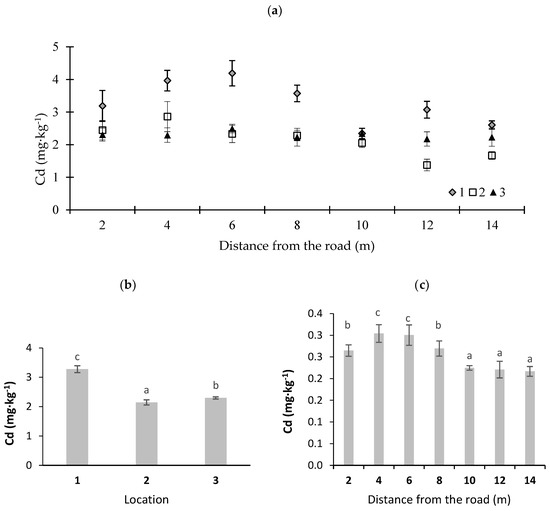 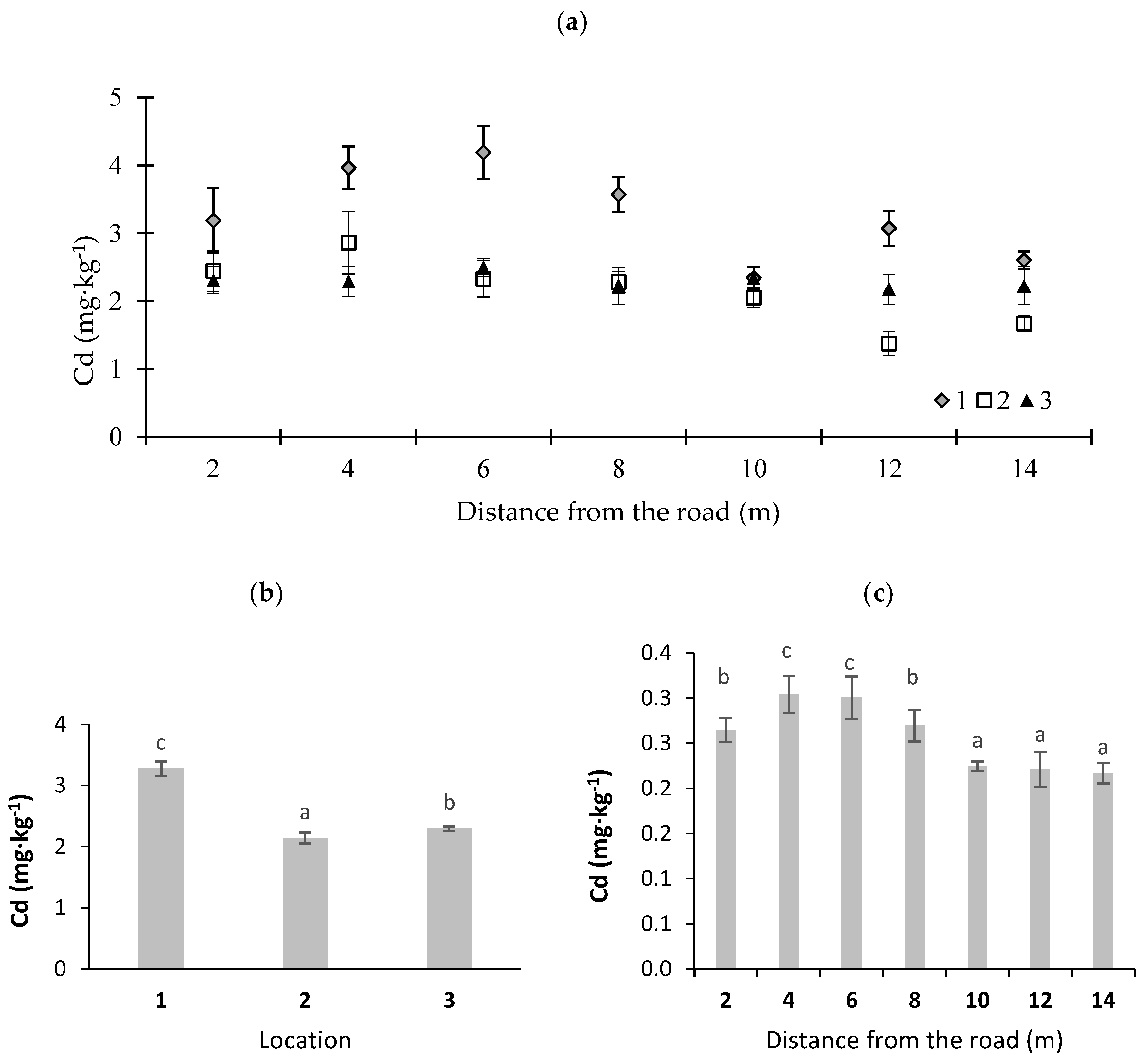