Background: Agriculture contributes a third of Rwanda’s GDP and is the main source of income for rural households, with 80% of the total population involved in crop and/or livestock production. The Government of Rwanda established the Muvumba rice project in 2011 amidst a policy shift towards rice as a national staple crop. However, the indiscriminate use of pesticides by local, low-income rice growers has raised concerns about potential human, animal and ecosystem health impacts as pesticide distribution and application are not strictly regulated. Although pesticide use can directly influence farmer health and ecosystems, little is known about small-scale farmers’ pesticide application practices and knowledge. We aimed to assess local application practices and understanding of pesticides to identify gaps in farmers’ knowledge on safe pesticide use and deviations from established standards and recommended practices. Methods: We conducted a cross-sectional study consisting of observations of pesticide practices and interviews with 206 small-scale rice growers in Nyagatare District, Rwanda, in March 2017. Descriptive statistical analyses (sample means, standard deviation and range) were performed, and we evaluated the association between farmers’ personal protective equipment (PPE) use and their education level and literacy status. Results: Over 95% of observed farmers did not comply with minimum standards for safe pesticide use, and 80% of respondents reported that they stored pesticides in their homes without personal protection measures. Education and literacy level were not significantly associated with PPE use. Additionally, 90% of respondents had experienced adverse health effects after using pesticides including intense headache, dizziness, stomach cramps, skin pain and itching, and respiratory distress. All respondents also reported animals in and around the rice scheme (cattle, birds, and fish) behaving abnormally or with signs consistent with pesticide exposure in the six months preceding the study, which may be linked to pesticide-contaminated water. Conclusions: Our study demonstrates potential for high exposure to pesticides for farmers, their families, and animals sharing rice-growing or downstream environments and points to the need for training on safe and effective pesticide use. View Full-Text
Keywords: agricultural runoff; sustainable agriculture; Rwanda; pesticides; farmer knowledge; ecosystem health agricultural runoff; sustainable agriculture; Rwanda; pesticides; farmer knowledge; ecosystem health
►▼ Show Figures 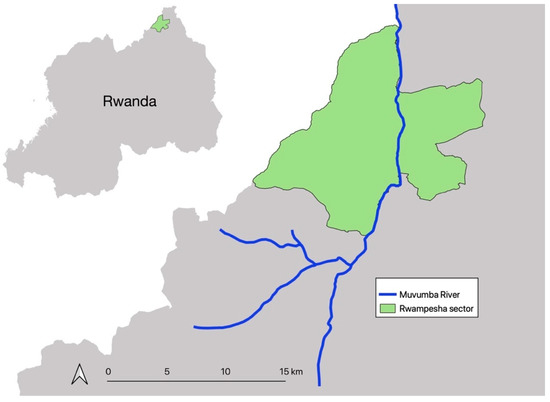