According to different authors, the prevalence of AF in athletes is 2–10 times greater (five times on average) than in the general population. The magnitude of the prevalence of AF is truly large. According to published data, AF mostly occurs in individuals who train the quality of endurance. According to British researchers in England, more than two million people a year take part in marathons. According to the results of an electrocardiogram (ECG) control, 5% to 10% of the athletes among middle-aged marathon runners (over 35 years old) suffer from AF [3]. Most authors examined only men. However, in studies involving athletes of both sexes, no gender differences were detected [4,5,6,7].
AF reduces the quality of life and the ability to exercise in athletes [7]. Meanwhile, this is a phenomenon of extremely high overvoltage of the body and is a serious disease [8,9,10,11]. Given the frequency of formation of thromboembolic complications, the problem of AF in athletes is particularly relevant. Paget–Schroetter syndrome, injuries of limbs, dehydration, and compression commonly occur in sportsmen. Under such conditions, the incidence of AF is more than four people per 100,000 cases. In this group, diagnosed pulmonary thromboembolia occurs at a frequency of two per 100,000 athletes, and the mortality rate reaches 6–7% [12,13].

Studying the problem of AF in professional sport is fraught with difficulties. This is mostly due to a combination of various factors, such as individual fitness, talent, and the dedication of athletes. In this regard, there are no clear parameters for heart cavity size and ventricular wall thickness nowadays. However, according to most authors, the left ventricular end-diastolic diameter in athletes in B -modal mode using short axis views is up to approximately 54 mm, while the thickness of the left ventricular myocardium is not more than approximately 13 mm. The diameter of the left atrium is up to approximately 37–50 mm or up to 36 mL/m2 in men and approximately 33 mL/m2 in women; the diameter of the right atrium is up to approximately 19–25 mL/m2 in men and approximately 15–25 mL/m2 in women. At the same time, indices of left ventricle diastolic function remain at the level of reference values: the deceleration time of the left ventricular outflow tract is 200–300 ms; isovolumic relaxation time is less than 100 ms; the early diastolic component of the medial mitral ring movement in tissue Doppler mode, peak e >10 cm/sec; the ratio of the peaks of the early transmitral blood flow, measured by a constant wave Doppler (peak E) and tissue Doppler by analyzing the amplitude of motion of the medical part of the mitral ring (peak e), E/e >6; and the systolic component of the mitral ring movement in tissue Doppler mode, peak S > 9 [26,27,32,33,44].
Dilatation of cardiac cavities above the specified values, and importantly, appearance of signs of impaired myocardial relaxation recorded by the method of constant-wave Doppler ultra-sonography (which is one of the components of atrial remodeling) develop in over-trained athletes [33,41]. Thus, the severity of diastolic dysfunction as well as the volume and intensity of physical activity plays a role in the formation of increased atrial size, which is a predisposing factor for AF formation and fixation.
AF can be induced by sympathetic or parasympathetic innervation. Induction by the parasympathetic nervous system is predominant in athletes. Such a pattern is observed in more than 68% of AF in athletes, regardless of the athletic quality trained [33,45,46]. An increase in vagus nerve tonus may indicate a sympathetic nervous system breakdown against over-training [33]. An increased vagus nerve tonus initiates AF by creating a macro-reactive increase in the dispersion of the atrial refractory period [33,34]. In addition, reflex influences play a certain role in the provocation of AF. One of the predisposing factors is the presence of gastritis and reflux esophagitis [35].
According to Benito et al. [26], the formation of atrial and ventricular myocardium degeneration is typical for athletes of all age groups against the background of increased production of fibrosis factors such as fibronectin 1, procollagen 1 and 3, transforming growth factor B1, matrix metalloproteinase 2, and tissue inhibitor of metalloproteinase 1. According to the authors, these mechanisms aggravate and accelerate in athletes. The level of profibrotic factors in athletes rises with increasing athletic experience and age [26]. Similar data were obtained by Wolk and co-authors [13] based on a survey of 45 elite athletes with AF. According to the results of echocardiography and MRI, a significant myocardial fibrosis was detected in these patients compared with an identical group of people not involved in sports. It was demonstrated that collagen metabolism markers (such as metalloelastase) were higher in master athletes compared to sedentary individuals. MRI with gadolinium, performed for the detection of fibrous degeneration of the ventricular and atrial myocardium, showed similar data [41,45].

For athletes, paroxysmal atrial fibrillation for five minutes or longer is clinically significant [31,34]. Naturally, such duration of paroxysms requires appropriate approaches to the diagnostic process. According to the official position, the main method of AF diagnosis is electrocardiography (ECG) in 12 leads and 24-h ECG monitoring. In athletes, paroxysmal AF often occurs either in the training process or after training or competition. Specialists can perform and correctly interpret the ECG in such conditions only with the use of telemedicine technologies. This is reflected in the relevant American and European recommendations [30,41]. According to the experts, all patients should have an ECG as part of the survey; in 19% of cases, ergometry was used; in 5%, 24-h long-term ECG was used; in 5%, echocardiography was used; and in 1%, cardiac catheterization and magnetic resonance diagnostics were used [42,47]. The above-mentioned volume of examination of athletes has reduced the mortality rate from 4% per 100,000 people to 0.4% over the past few years. Predisposing factors for AF in athletes are summarized in Table 1.

Hereditary and acquired factors play a role in the development of atrial fibrillation in athletes as in the main population. Among the latter, the presence of arterial hypertension, obesity, carbohydrate dysmetabolism, dilatation of atrial cavities, impaired ventricular diastolic function, and fibrous degeneration of the atrial myocardium are the most relevant. Along with this, the duration and the intensity of the sport and age (where older athletes are at higher risk) play important roles. For these individuals, the vagotonic form of this type of arrhythmia is most characteristic. To prevent the development of AF, a thorough history and complaints collection, vegetative balance assessment, ECG examination, 24-h ECG monitoring, echocardiography with assessment of ventricular diastolic function, stress tests, cardiac MRI with analysis of the degree of myocardial fibrous degeneration, as well as medical and genetic studies should be performed. In order to prevent embolic complications and sudden death in patients involved in sports, anticoagulant treatment should be carried out in the presence of risk factors. Given the low level of knowledge regarding the effectiveness of using new oral anticoagulants for the prevention of thromboembolism, it is advisable to conduct large-scale randomized clinical research to study their efficacy and safety.
The problem under consideration is relevant not only for athletes involved in classical sports, but also for professionals and amateurs who are gaining popularity in high-intensity or requiring long endurance sports, such as ultramarathons and triathlons. This is important, as older athletes are more likely to engage in such sports. Obviously, such athletes must undergo an in-depth examination. Trainers should clearly monitor the appearance of signs of fatigue and a breakdown of adaptation for the timely prevention of over-training syndrome. 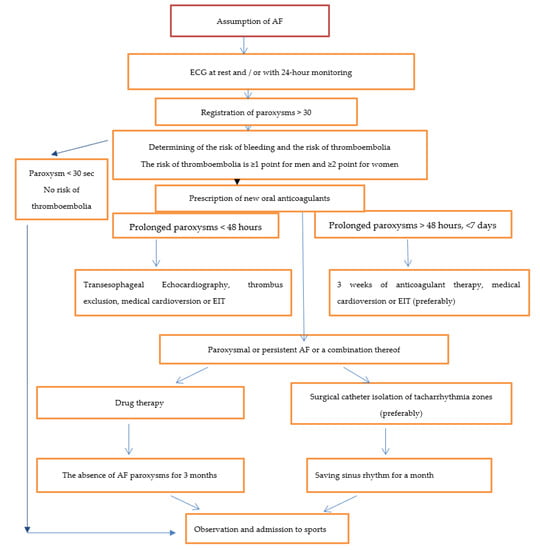 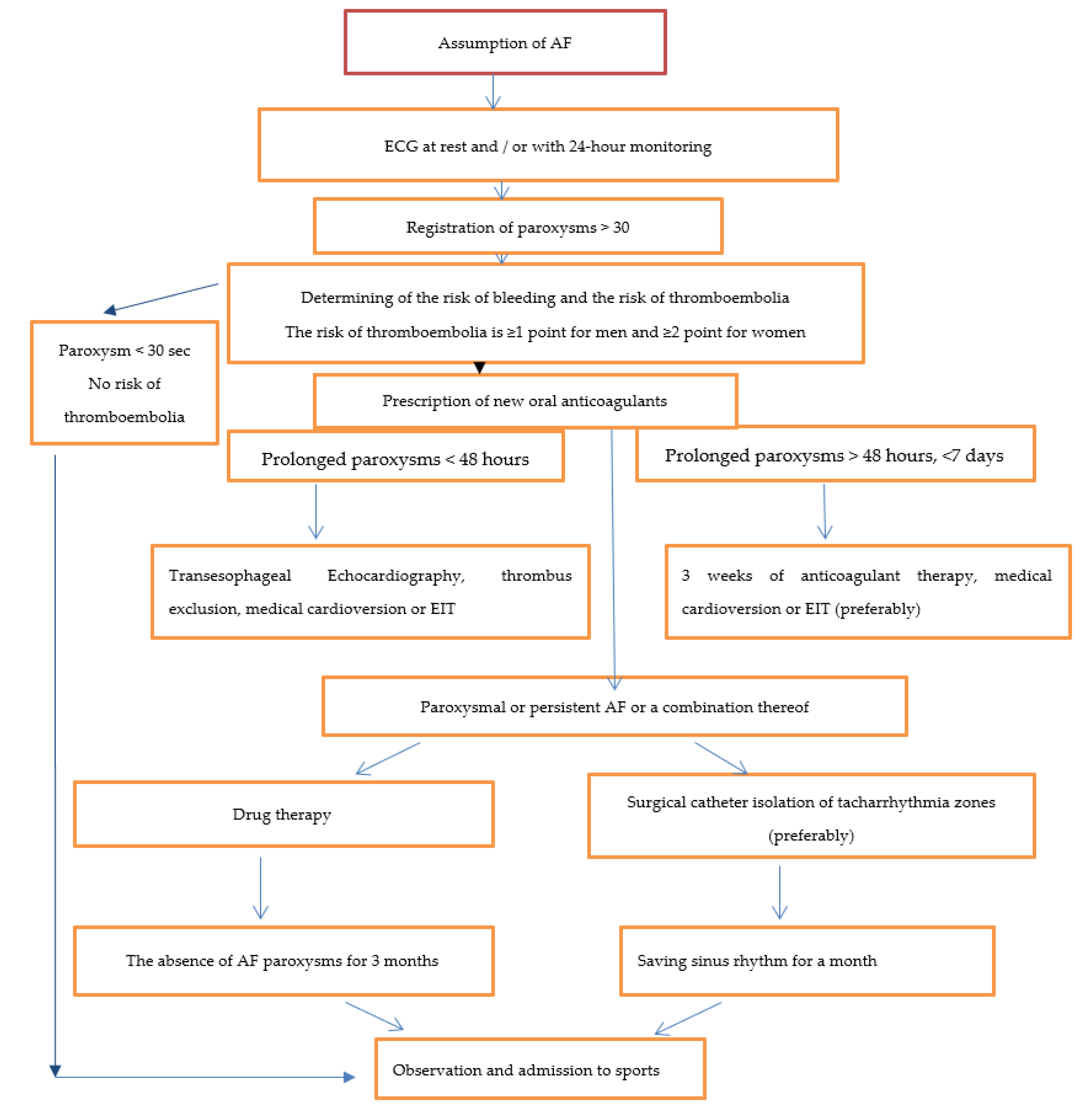 Table 1. Predisposing factors for atrial fibrillation (AF) in athletes.
Table 1. Predisposing factors for atrial fibrillation (AF) in athletes.
CG = cardiogram; LA = left atrium; RA = right atrium; LV = left ventricle; MRI = magnetic resonance imaging; ECG = electrocardiogram; E = left ventricular early diastolic filling; e = early diastolic velocity of the mitral annulus; F = oscillation waves of RR intervals of ECG in the high-frequency region from 0.15 Hz to 0.4 Hz.; S—systolic component of the mitral ring movement in tissue Doppler mode.
© 2019 by the authors. Licensee MDPI, Basel, Switzerland. This article is an open access article distributed under the terms and conditions of the Creative Commons Attribution (CC BY) license (http://creativecommons.org/licenses/by/4.0/).
We use cookies on our website to ensure you get the best experience. Read more about our cookies here.
Accept
We have just recently launched a new version of our website. Help us to further improve by taking part in this short 5 minute survey here. here.
Never show this again