Investigating the Aftershock of a Disaster: A Study of Health Service Utilization and Mental Health Symptoms in Post-Earthquake Nepal

Immunosuppressive drugs are widely used to avoid graft rejection, but they are also known to be strongly hepatotoxic. The goal of the current study was to determine: (i) the immunoexpression of SOD1, CAT, GPX1; (ii) the concentration of MDA, GSH; (iii) the activity of SOD, CAT, GPX, in the native liver of a pregnant female rats undergoing immunosuppressive therapy. The study was based on archival material obtained from Department of Nephrology, Transplantology and Internal Medicine of the Independent Public Clinical Hospital No. 2 at the Pomeranian Medical University in Szczecin, Poland. The study was carried out on 32 female rats exposed to oral administration of immunosuppressants two weeks before and during pregnancy. The percentage of SOD1 immunopositive hepatocytes in rats treated with cyclosporine A, mycophenolate mofetil, everolimus, and glucocorticosteroid was significantly elevated above that of the control rats. The concentration of MDA in the liver of animals exposed to cyclosporine A, everolimus, and glucocorticosteroid was significantly higher than in other groups. Among the groups of dams treated with immunosuppressive drugs, the highest significant concentration of GSH was found in the livers of rats treated with cyclosporine A, mycophenolate mofetil and glucocorticosteroid. Immunosuppressive therapy during pregnancy affects the oxidoreductive balance in the livers of rats, depending on the regimen used. View Full-Text
Keywords: oxidative stress; immunosuppressive drugs; liver; transplantation; pregnancy; redox balance oxidative stress; immunosuppressive drugs; liver; transplantation; pregnancy; redox balance
►▼ Show Figures 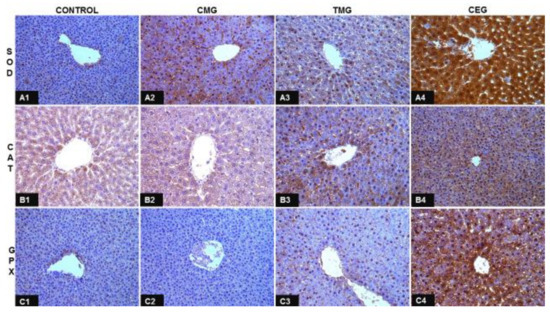