Prevalence of Burnout in Medical and Surgical Residents: A Meta-Analysis
Previous Article in Journal

Impaired Glucose Metabolism in Bipolar Patients: The Role of Psychiatrists in Its Detection and Management

A Meta-Analysis of the Rates of Suicide Ideation, Attempts and Deaths in People with Epilepsy

This meta-analysis aimed to evaluate the association between epilepsy and suicide. We systematically searched PubMed, PsycINFO, Embase and Web of Science for studies that reported the prevalence of suicidality in the form of suicide ideation, attempts and deaths among people with epilepsy (PWE). Studies were included if they reported the numbers of patients who died by suicide and concurrently suffered from epilepsy, assessed suicide ideation, or studied suicide attempts in PWE by validated instruments or diagnostic interviews. We used the random effects model to calculate the pooled odds ratios (OR) and standard mean differences (SMDs). We performed subgroup analyses. Seven case-control studies were included in the comparison of rates of suicide attempts between PWE and controls, with a total of 821,594 participants. Our analyses demonstrated a positive association between epilepsy and suicide attempts (pooled OR = 3.25, 95% confidence interval (CI): 2.69–3.92, p < 0.001), indicating that PWE have an elevated risk of suicide. The pooled prevalence for suicide ideation (24 studies) and suicide attempts (18 studies) were 23.2% (95% CI: 0.176–0.301) and 7.4% (95% CI: 0.031–0.169) respectively. The pooled rate of death due to suicide (10 studies) was 0.5% (95% CI: 0.002–0.016). Meta-regression showed that mean age and proportion of male gender were significant moderators for prevalence of suicide attempts and death due to suicide in PWE. Young PWE could be triggered by relationship problems and male PWE might use more lethal methods to attempt suicide. This meta-analysis provides the most up-to-date information on the prevalence of suicide among people with epilepsy and guidance on strategies to improve current psychiatric services provided for this population. View Full-Text
Keywords: epilepsy; meta-analysis; prevalence; suicide epilepsy; meta-analysis; prevalence; suicide
►▼ Show Figures 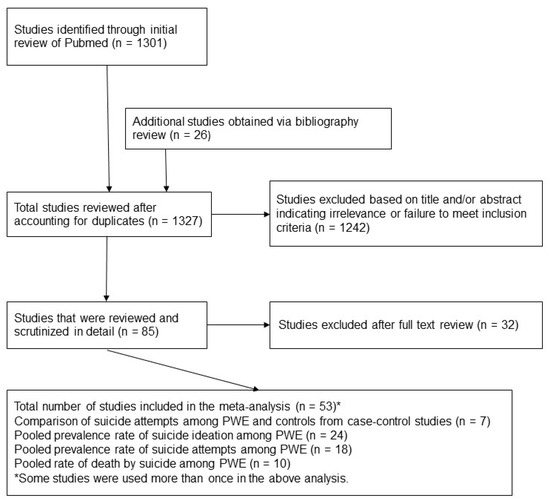