Background: Total knee arthroplasty (TKA) is socially relevant due to its high prevalence, high incidence and the affected population. A subpopulation of TKA patients exists that strives to be active and also return to sports after total joint replacement. In this context, a further group of TKA patients is interested in high-impact physical activities and want to proceed with such activities even after surgery. Focusing on winter sports, there is still a lack of evidence on whether ski mountaineering is feasible for this subgroup of patients. Therefore, this feasibility study examines the effects of moderate ski mountaineering on strength, balance, functional abilities and mental health in persons following a TKA. Methods: Eight patients (six males, two females; median age, 63 ± Interquartile range 9 years) with TKA were included in this study. The volunteers, who were pre-selected for a 7-day holiday in Sankt Johann (Tyrol, Austria), participated in five guided ski mountaineering tours. Statistical analyses of non-parametric longitudinal data were performed using analysis of variance. For gait parameters and the Feeling Scale, one-factor longitudinal models were used. Statistical significance was set at the level of p < 0.05. Results: A significant decrease in the S3-Check MFT stability index (p = 0.04), a significant increase in general well-being (p = 0.05), and a trend towards a decrease in general stress (p = 0.1) were detected, while all other parameters were unaffected. Conclusion: A 7-day recreational ski mountaineering holiday had no negative effects on ski-experienced patients with TKA and seemed to increase well-being. Further studies should focus on larger groups and use controlled designs. Additionally, long-term effects should be evaluated. View Full-Text
Keywords: total knee arthroplasty; total knee replacement; return to sport; ski mountaineering; muscle fatigue total knee arthroplasty; total knee replacement; return to sport; ski mountaineering; muscle fatigue
►▼ Show Figures 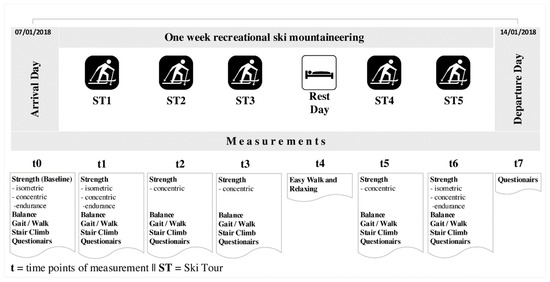