Ischemic preconditioning (IPC) is a method that has been used prior to resistance exercise to improve performance. However, little is known about its effect before a resistance exercise training session on hemodynamic responses. Thus, the aim of the study was to verify the acute effect of IPC before a session of resistance exercises on the systolic blood pressure (SBP), diastolic blood pressure (DBP), and mean blood pressure (MBP) of trained normotensive trained individuals. Sixteen men (25.3 ± 1.7 years; 78.4 ± 6.2 kg; 176.9 ± 5.4 cm, 25.1 ± 1.5 m2.kg−1) trained in resistance exercise (RE) (5.0 ± 1.7 years) were evaluated in five sessions on non-consecutive days. The first two sessions’ subjects performed one repetition maximum (RM) test and retest, and for the next three sessions, they performed the experimental protocols: (a) IPC + RE; (b) SHAM + RE; (c) RE. The RE protocol consisted of six multi-joint exercises, three sets at 80% of 1RM until concentric failure. Blood pressure was monitored pre-session, immediately after and every 10 min for 60 min after RE. IPC consisted of 4 × 5 min of vascular occlusion/reperfusion at 220 mmHg. SHAM (fake protocol) consisted of 20 mmHg of vascular occlusion/reperfusion. The IPC + RE protocol showed significant reductions on SBP, DBP, and MBP compared with SHAM + RE (p < 0.05) and with RE (p < 0.05). The IPC + RE protocol presented a greater magnitude and duration of post-exercise hypotension (PEH) from 20 to 60 min after exercise in SBP (−11 to 14 mmHg), DBP (−5 to 14 mmHg), and MBP (−7 to 13 mmHg). Therefore, we can conclude that the application of IPC before an RE session potentiated the PEH in normotensive individuals trained in resistance exercise. View Full-Text
Keywords: ischemic preconditioning; resistance exercise; blood pressure; post-exercise hypotension ischemic preconditioning; resistance exercise; blood pressure; post-exercise hypotension
►▼ Show Figures 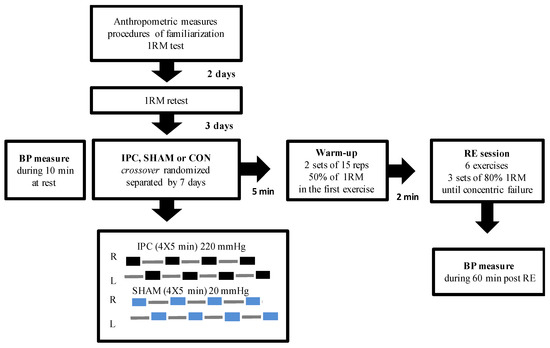