Chronic Fatigue, Physical Impairments and Quality of Life in Women with Endometriosis: A Case-Control Study

Prepregnancy Endocrine, Autoimmune Disorders and the Risks of Gestational Hypertension-Preeclampsia in Primiparas: A Nationwide Population-Based Study in Taiwan

(1) Objective: To assess the risks of gestational hypertension/preeclampsia (GH-PE) in women with prepregnancy endocrine and autoimmune disorders such as polycystic ovarian syndrome (PCOS) and systemic lupus erythematosus (SLE). (2) Methods: In a nationwide population-based longitudinal study, data were retrieved from the 1998 to 2012 Taiwan National Health Insurance Research Database. ICD9-CM codes 256.4, 710.0, and 642.X were identified for the corresponding diagnoses of PCOS, SLE, and GH-PE, respectively, which were further confirmed by inspection of medical claims data for ultrasonography findings, laboratory tests, blood pressure measurements and examinations of urine protein to ensure the accuracy of the diagnoses. To clarify the risks of primiparous GH-PE, the study excluded women diagnosed with PCOS or SLE at <15 or >45 years of age, pre-existing chronic hypertension, GH-PE before PCOS and SLE, and abortion or termination before 20 weeks’ gestation. For women affected by prepregnancy PCOS or SLE individually, each pregnant woman was age-matched to four pregnant women without PCOS or SLE. Logistic regression analyses were applied to report odds ratios (ORs) for the risks of GH-PE after adjustment for age, occupation, urbanization, economic status, and other co-morbidities. (3) Results: Among 8070 and 2430 women with prepregnancy PCOS and SLE retrieved from a population of 1,000,000 residents, 1953 (24.20%) and 820 (33.74%) had subsequent primiparous pregnancies that were analyzable and compared with 7812 and 3280 pregnancies without prepregnancy PCOS and SLE, respectively. GH-PE occurred more frequently in pregnancies with prepregnancy PCOS (5.79% vs. 2.23%, p < 0.0001) and SLE (3.41% vs. 1.80%, p < 0.01) as compared to those without PCOS and SLE. Further analysis revealed that prepregnancy PCOS (adjusted OR = 2.36; 95%CI: 1.83–3.05) and SLE (adjusted OR = 1.95; 95%CI: 1.23–3.10) were individually associated with GH-PE. The risk of GH-PE was not reduced in women with prepregnancy PCOS receiving metformin treatment (p = 0.22). (4) Conclusions: Prepregnancy PCOS and SLE are independent and significant risk factors for the occurrence of GH-PE. Because the peripartum complications are much higher among pregnancies with GH-PE, the at-risk woman should be informed and well-prepared during her pregnancy and delivery. View Full-Text
Keywords: gestational hypertension; preeclampsia; polycystic ovarian syndrome (PCOS), systemic lupus erythematosus (SLE) gestational hypertension; preeclampsia; polycystic ovarian syndrome (PCOS), systemic lupus erythematosus (SLE)
►▼ Show Figures 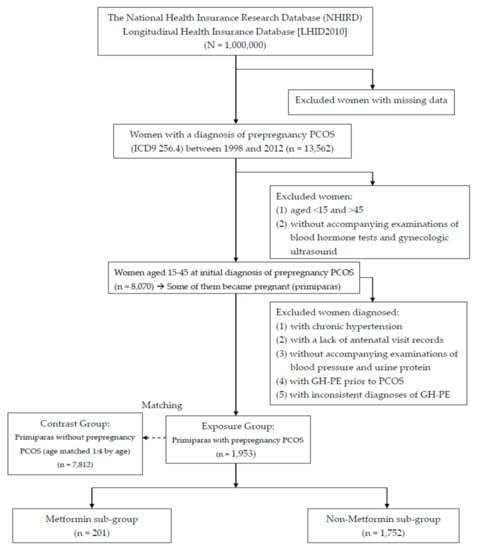