In recent decades, the need to manage risks associated with working conditions has become increasingly important, given the significant changes that have taken place in the world of work, including the nature of work and work organisations, contractual arrangements and new forms of employment, use of new technology and digitalisation and changes in workforce demographics [1]. Furthermore, during the last few decades there has been a shift away from traditional occupations (such as in industry) with high exposure to physical risks, towards other occupations (such as jobs in the service sector) with high exposure to psychosocial risks, which have contributed to decreases in accident rates but also to an increase in mental ill health [2,3,4].
Psychosocial risks arise from psychosocial hazards, which are aspects of work organisation, design and management that have the potential to cause harm to individual health and safety and organisational outcomes [1,5]. Psychosocial risks in the workplace are considered to be emerging and increasing [4,6,7,8,9,10]. Linked to psychosocial risks, issues such as work-related stress and workplace harassment and violence are now widely recognised as major challenges to occupational safety and health [1,5]. Psychosocial risks have been found to be significantly causally related to ill health including mental health disorders [11,12,13], cardiovascular disease [14,15] and musculoskeletal disorders [16,17]. They are also related to an increased risk of being absent as well as becoming disabled at a later stage [18,19].
A number of approaches have been developed and implemented by various stakeholders at the international, national, regional/sectoral and enterprise levels to manage psychosocial risks and promote better psychosocial work environments [20]. At the enterprise level, a substantial degree of diversity can be observed across such intervention strategies, with a common distinction being between organisational and individual orientations, or between primary-, secondary- and tertiary-level interventions.
While the need for effective interventions has been clear for some time, managing psychosocial risks effectively does not appear to be that simple, particularly as compared to traditional OSH risks [1,8]. One of the key reasons identified for this in the literature is that different stakeholders perceive these risks differently [21]. An important factor in these considerations is social dialogue and agreement in risk perception and awareness between employer and employee representatives [21,22,23], which may act as a driver as well as a barrier in psychosocial risk management. This study tested this assumption by exploring the added value of managers’ and employee representatives’ agreement in risk perception and awareness in explaining the management of psychosocial risks, which are considered ‘softer’ and more ‘subjective’, in comparison to that of traditional occupational safety and health (OSH) risks, which are considered ‘harder’ and more ‘objective’.

A total of 28,649 managers and 7226 employee health and safety representatives were interviewed in ESENER-1. The selection of organisations for this paper was first restricted to those for which both the management interview and the interview with the employee representative were present, but after list-wise deletion in order to deal with missing data, analyses were ultimately performed on a sample of 7068 organisations.
A comparison of the selected organisations with the remaining group of organisations showed that the selected organisations were significantly larger (more often more than 50 employees) and older (established before 1990). The selected organisations more often came from public administration, health, social work and other community, social and personal service activities, manufacturing, or electricity, gas and water supply, and came less often from construction, wholesale and retail trade, repair of motor vehicles, motorcycles and personal and household goods, hotels and restaurants and real estate, renting and business activities. Furthermore, the selected organisations more often came from Denmark, Germany, Finland, Ireland, Italy, Sweden, Bulgaria and Estonia.
The response rate varied per country (see Reference [7], p. 95) and ranged from 14% in Luxembourg and Croatia to 59% in Greece. Table 1 presents the sample characteristics. EU-OSHA stated that the large discrepancies in response rates were mainly due to national differences in the willingness amongst enterprises to participate in telephone interviews. In order to reproduce real quantitative proportions for cross-national analysis, an ‘international weighting’ was used to adjust the national sample sizes. In the case of this study, the weighting accommodated an establishment proportional analysis.

The independent variables were the answers to the mirror questions in the manager and employee representative questionnaires on risk perception and awareness. Managers as well as employee representatives were asked whether any of the following psychosocial risks were a (major, some or no concern, or ‘not applicable’) concern in their enterprise: time pressure; poor communication between management and employees; poor cooperation amongst colleagues; lack of employee control in organising work; job insecurity; having to deal with difficult customers, patients, pupils etc.; problems in supervisor–employee relationships; long or irregular working hours; an unclear human resources policy; and discrimination. Each person’s response to the questions on risk perception and awareness were averaged to arrive at an individual scale score. A scale score was only calculated if the person answered at least seven out of ten questions on psychosocial risks. Cronbach’s alphas were 0.72 for managers and 0.75 for employee representatives.

Managers and employee representatives were asked whether the following issues were a (major, some or no concern, or ‘not applicable’) concern in their enterprise: dangerous substances; accidents; noise and vibration. Each person’s response to the questions on risk perception and awareness were averaged to arrive at an individual scale score. A scale score was only calculated if the person answered at least two out of three questions. Cronbach’s alphas were 0.68 for managers and 0.70 for employee representatives.

Managers were asked whether in the last three years their enterprise had used any of the following measures to deal with psychosocial risks: changes to the way work is organised, redesign of the work area, confidential counselling for employees, set-up of a conflict resolution procedure, changes to working time arrangements, and provision of training (yes, no or not applicable). We averaged each person’s responses across items to arrive at a scale score for each person. A scale score was calculated only if the person answered at least four out of six questions (Cronbach’s alpha = 0.71).

Managers were asked whether workplaces in their establishment are regularly checked for safety and health as part of a risk assessment or similar measure (yes, no or not applicable). They were also asked whether equipment and working environment are routinely considered in these checks and whether actions have been taken as follow-up to these checks (yes, no or not applicable). Using these three variables, we calculated a new variable with a dichotomous outcome: no, no regular check for safety and health and, yes, a regular check including equipment and working environment and follow-up actions.

4.1. Degree of Agreement and Discrepancies in Risk Perception and Awareness

This research would not have been possible without the public availability of the ESENER dataset by EU-OSHA. 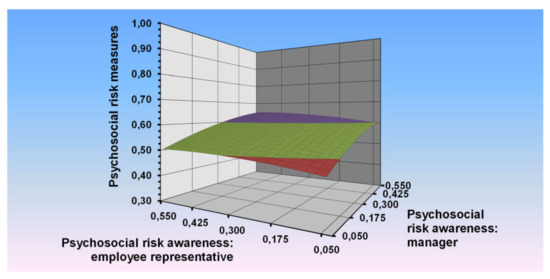 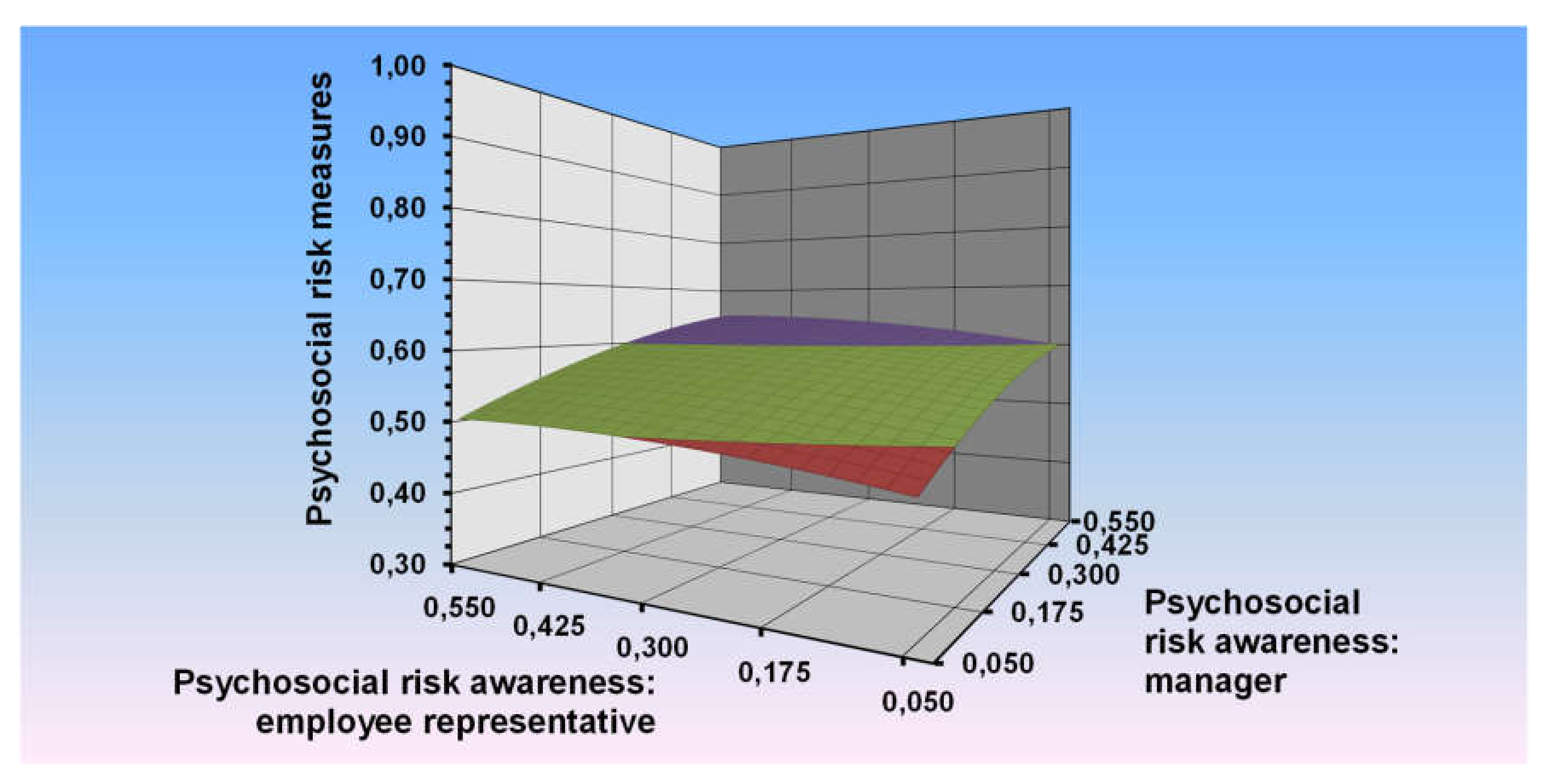 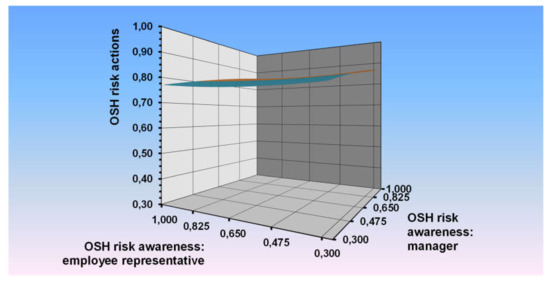 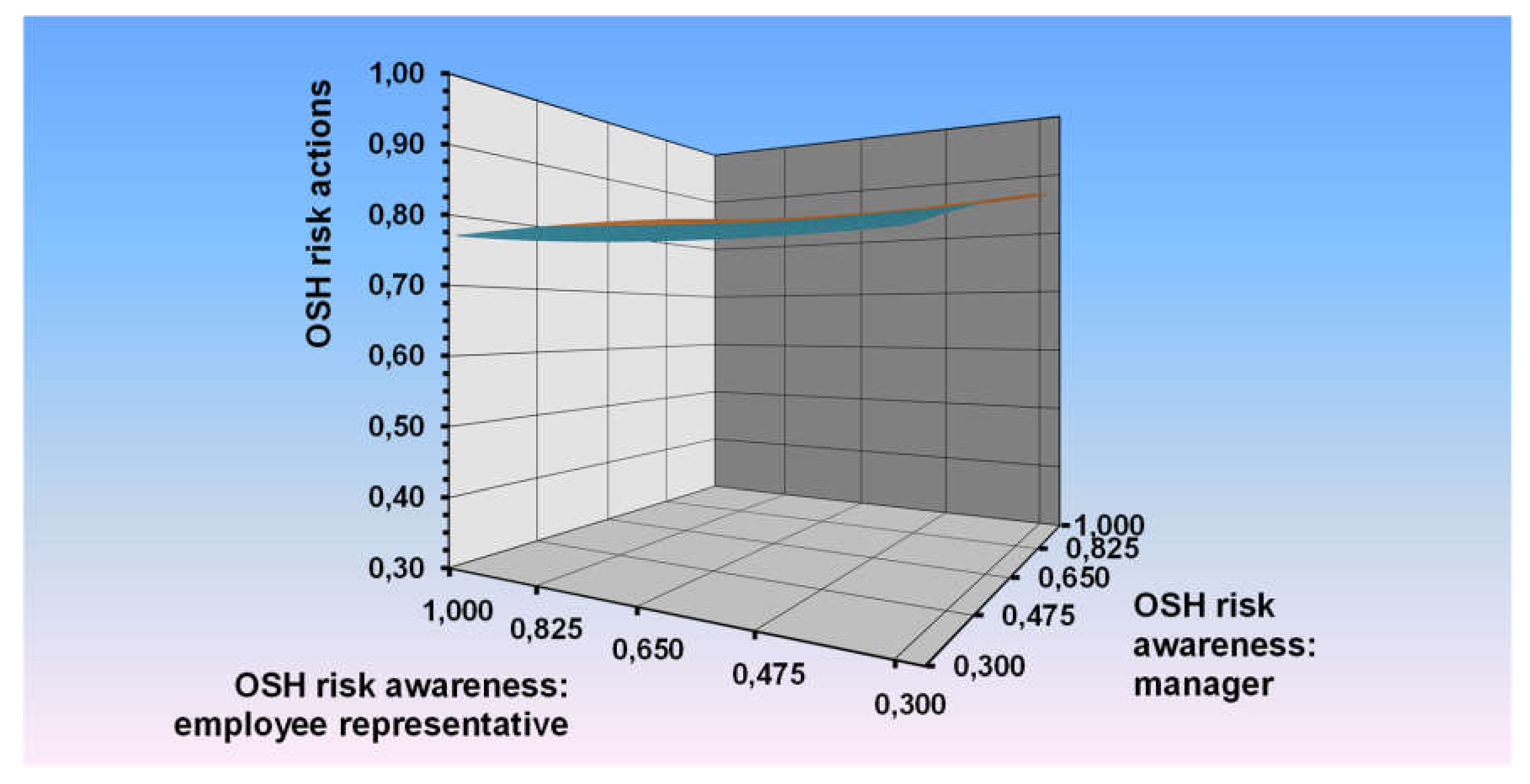