Association between Passive Smoking from the Mother and Pediatric Crohn’s Disease: A Japanese Multicenter Study

The risk of ethnic Kawasaki disease (KD) has been proposed to be associated with blood mercury levels in American children. We investigated the blood levels of mercury in children with KD and their association with disease outcome. The mercury levels demonstrated a significantly negative correlation with sodium levels (p = 0.007). However, data failed to reach a significant difference after excluding the child with blood mercury exceeding the toxic value. The findings indicate that KD patients with lower sodium concentrations had a remarkably higher proportion of intravenous immunoglobulin (IVIG) resistance (p = 0.022). Our patients who had lower mercury levels (<0.5 μg/L) had more changes in bacille Calmette-Guerin. Mercury levels in 14/14 patients with coronary artery lesions and 4/4 patients with IVIG resistance were all measured to have values greater than 1 μg/L (while average values showed 0.92 μg/L in Asian American children). Mercury levels had no correlations with IVIG resistance or coronary artery lesion (CAL) formation (p > 0.05). CAL development was more common in the incomplete group than in the complete KD group (p = 0.019). In this first report about mercury levels in KD patients, we observed that the juvenile Taiwanese had higher mercury concentration in blood compared to other populations. View Full-Text
Keywords: Kawasaki disease; mercury; sodium Kawasaki disease; mercury; sodium
►▼ Show Figures 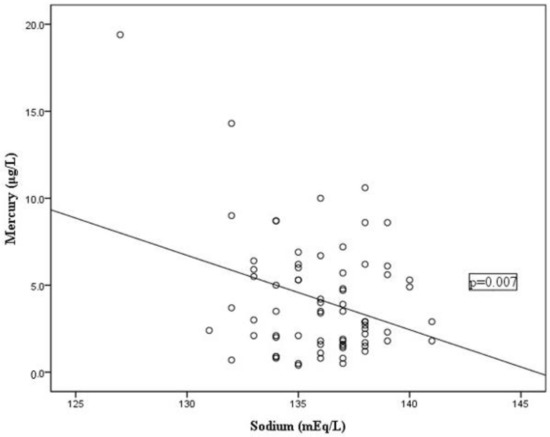