Self and Nature: Parental Socialization, Self-Esteem, and Environmental Values in Spanish Adolescents

Nowadays, an infectious disease outbreak is considered one of the most destructive effects in the sustainable development process. The outbreak of new coronavirus (COVID-19) as an infectious disease showed that it has undesirable social, environmental, and economic impacts, and leads to serious challenges and threats. Additionally, investigating the prioritization parameters is of vital importance to reducing the negative impacts of this global crisis. Hence, the main aim of this study is to prioritize and analyze the role of certain environmental parameters. For this purpose, four cities in Italy were selected as a case study and some notable climate parameters—such as daily average temperature, relative humidity, wind speed—and an urban parameter, population density, were considered as input data set, with confirmed cases of COVID-19 being the output dataset. In this paper, two artificial intelligence techniques, including an artificial neural network (ANN) based on particle swarm optimization (PSO) algorithm and differential evolution (DE) algorithm, were used for prioritizing climate and urban parameters. The analysis is based on the feature selection process and then the obtained results from the proposed models compared to select the best one. Finally, the difference in cost function was about 0.0001 between the performances of the two models, hence, the two methods were not different in cost function, however, ANN-PSO was found to be better, because it reached to the desired precision level in lesser iterations than ANN-DE. In addition, the priority of two variables, urban parameter, and relative humidity, were the highest to predict the confirmed cases of COVID-19. View Full-Text
Keywords: sustainable development; COVID-19; artificial intelligence; PSO; DE; feature selection sustainable development; COVID-19; artificial intelligence; PSO; DE; feature selection
►▼ Show Figures 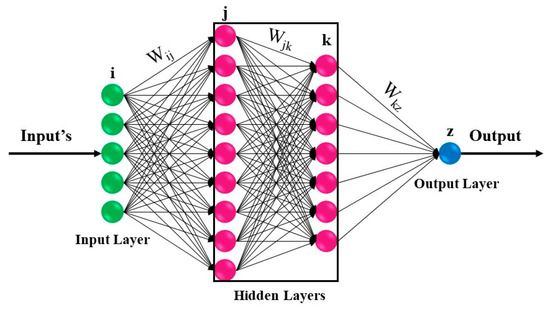