“Smart Process” of Medical Innovation: The Synergism Based on Network and Physical Space
Next Article in Special Issue

The area of Civitavecchia (Lazio region, Central Italy) has been a reason of concern in the past because of environmental air contamination. The aim of this study was to evaluate the association between air pollution from different sources and respiratory symptoms and lung function in the population. A sample of 1177 residents underwent medical examination and lung function tests. Information on individual characteristics, histories of exposure and medical history were collected through a validated questionnaire. Long-term exposure to industrial, harbour, biomass combustion emissions (PM10) and urban traffic (NOx) at residential address was assessed using a Lagrangian dispersion model. The associations between exposure and wheezing and dyspnea were assessed using logistic regression models, while modified Poisson regression models were used to evaluate cough with phlegm. Relationships between exposure and lung function were analysed using linear mixed-effects models and cross-correlation. PM10 emissions from the harbour were associated with lower lung function parameters (FEV1: β = –0.12, 95% CI –0.21 –0.03; p = 0.02; FEV1/FVC: β = –1.67, (–3.10 –0.23); p = 0.02. This association was observed also in healthy subjects, but not in females. We found, even if at low exposure level, an effect of environmental PM10 exposure from harbour on lung function. View Full-Text
Keywords: air pollution; lung function reduction; respiratory symptoms air pollution; lung function reduction; respiratory symptoms
►▼ Show Figures 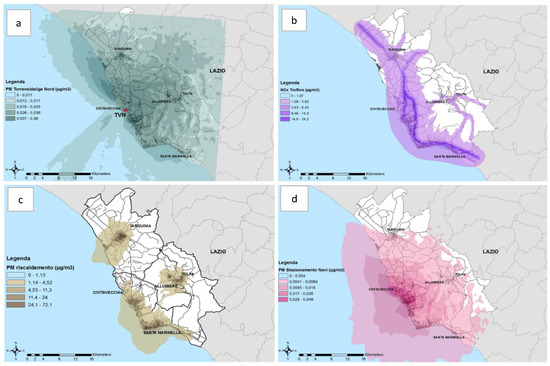