Environmental Exposures and Hearing Loss
Next Article in Special Issue

A device called FeelBreathe (FB)® was designed, developed, and patented for inspiratory muscle training. The main aim was to determine the acute responses on lung ventilation, gas exchange, and heart rate during exercise in patients with chronic obstructive pulmonary disease (COPD) with and without the use of FB. In this study, a randomized cross-over trial was performed with 18 men diagnosed with COPD (FEV1 between 30% and 70% of its predicted value). Each participant randomly conducted two trials with 30 min of rest between them with the same protocol on a treadmill for 10 min at a constant rate of 50% of VO2peak. Each test was performed randomly and in a crossover randomized design in two different conditions: (1) oronasal breathing; and (2) nasal breathing with FB (nasal ventilatory flow restriction device). It was observed that FB had positive effects on dynamic hyperinflation, breathing pattern, and breathing efficiency, with higher expiratory and inspiratory time. Despite these differences, blood oxygen saturation percentage, oxygen uptake, and heart rate showed a similar response for both conditions during exercise. The results suggest that exercise performed with FB improved ventilatory responses compared to the oronasal mode in COPD patients. This new tool could be used during most daily tasks and exercise programs. View Full-Text
Keywords: COPD; respiratory muscle training; exercise COPD; respiratory muscle training; exercise
►▼ Show Figures 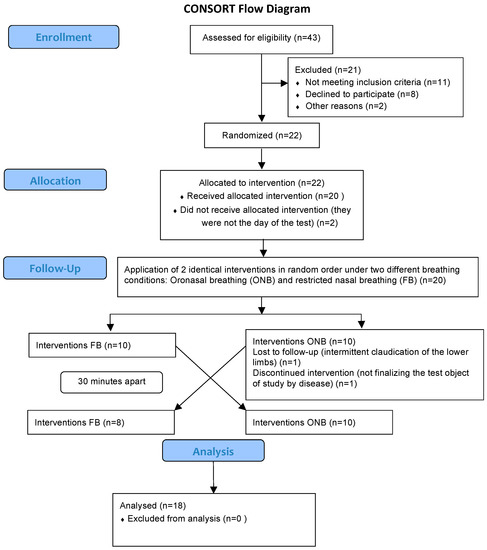