A Comparative Study of Online Depression Communities in China

In this study, the LDC under consideration comprises a comment thread appearing on Sina Weibo (Weibo, Beijing, China) [42], which is one of the most popular social media platforms in China, similar to Twitter (Twitter, San Francisco, U.S.A). In 2012, a Sina Weibo user named “Zoufan” committed suicide due to depression and posted a farewell message. For the past 8 years, there have been over 1 million comments under the farewell posting, and this number continues to grow. We chose this community as a data source because it is the largest and most representative LDC we know so far. Since the total number of comments under the farewell posting was too high, and premature data could not be obtained, we selected the comments from the previous year for our analysis. All comments from 1 January 2019 to 31 December 2019 (587,730 comments by 92,338 users) were crawled from the Zoufan community on Sina Weibo with the use of a spider that was programmed by Python (Python3.6.2, The Netherlands).
An MDC for comparative analysis had to be selected. We referred to some literature and surveyed some communities, including the depression community on Baidu Tieba (Baidu, Beijing, China) [15], DingXiangYuan [16], Sunshine [43], and Zhihu. Among them, the DingXiangYuan and Sunshine are online community platforms operated by medical and psychological service institutions and only for patients who have been diagnosed with depression. The number of posts and participants in online depression communities on DingXiangYuan and Sunshine is small. The Zhihu community platform belongs to the Q & A community, and the mode of communication is quite different from that of the Zoufan community. Baidu Tieba is the largest Chinese community in the world. The online depression community on Baidu Tieba and the Zoufan community on Sina Weibo have a wide range of users, similar modes of communication, fewer restrictions on user registration, and the same data scale. Therefore, we chose an online depression community on Baidu Tieba as the comparative data source. We obtained all posts (249,086 comments by 34,490 users) during the same time period (from 1 January 2019 to 31 December 2019).
An ethical review was not required because only publicly available data were used in this study.

In order to understand what users talk about in the LDC and MDC, and whether there are differences in information content between both communities, a thematic analysis of the postings was conducted. First, we preprocessed the whole text, including word segmentation and the removal of stop words. Keywords were extracted based on the term frequency–inverse document frequency (TF–IDF) [44]. Subsequently, we grouped and coded keywords and identified promising core themes. The coding method was equivalent to that used in qualitative research [45]. To better visualize the keywords, we drew keyword clouds.

In order to identify the type of emotion expression and social support, postings were classified. We divided emotions into three categories: positive (POS), neutral (NEU), and negative (NEG). Moreover, social support mainly includes two aspects: emotional support and informational support. A posting may express both emotional and informational support; thus, these two parts can be considered independently from each other. Therefore, we divided emotional support into seeking emotional support (SES), providing emotional support (PES), and if it was neither, we defined it as companionship (COM). Informational support was also divided into seeking informational support (SIS), providing informational support (PIS), and companionship (COM).
Given the impossibility to manually classify hundreds of thousands of texts, it was necessary to build text classifiers to identify the emotion and social support in postings. Classification was modeled as a supervised learning process where a training dataset was required. Due to the differences in language expression used in the two different community environments, and the different number of postings of each type in the annotated dataset of the two communities, the labeling process and the classifier building in the two communities were independent. Three research team members randomly selected 10,000 postings in the LDC and 10,000 postings in the MDC and independently labeled them. The majority rule was adopted to determine the assigned label when there was disagreement. We trained a text classifier using BERT (Bidirectional Encoder Representations from Transformers), a new language representation model developed by Google in 2018 that obtains new state-of-the-art results on 11 natural language processing tasks [46]. The Accuracy and F1 score were used to measure classifier performance. Table 1 shows the results of the labeling process, and Table 2 shows the performance of the classifier.

We investigated how members in different groups engaged in the communities. The level of engagement was measured by four metrics: productivity (i.e., members’ total number of postings), loyalty (i.e., number of days between members’ first and last posting), social activity (i.e., total number of replies to others), and attention received (i.e., total number of replies received). We compared the distribution of the four metrics between all clusters. To better clarify the differences between the clusters, the two-sample Kolmogorov–Smirnov test (K–S test) was used to compute the statistical gaps between every two clusters, with p-values <0.01 indicating statistically significant differences between clusters’ distributions of engagement metrics.

Figure 1 displays the keyword clouds with the top 50 keywords by weight in the two communities. The weight calculated by TF–IDF is intended to reflect the significance of the word to a document in a corpus. The keywords for each group were coded to determine the representative themes. The themes in the LDC were usually about the expression of emotions and feelings, mainly negative emotions (e.g., pain, sadness, depression) and daily communication (e.g., friend, good night, thank you). The themes in the MDC were mainly the treatment of depression (e.g., depression, hospital, doctor) and personal life (e.g., parents, child, school).

After determining the types of members, in order to better understand their use of online communities, we investigated the participation patterns of different types of members using the defined engagement metrics.

Our study provides new insights to explore how members use online depression communities. The potential risks of LDCs were revealed through a detailed comparative study of the LDC and MDC. The findings suggest that there was a large number of individuals with extreme negative emotions in the LDC. This indicates higher levels of depression symptoms in these members at a broad level. However, there was a lack of effective information sharing about the treatment of depression in this community. This may be due to the lack of information providers, such as support groups, in the LDC. Moreover, this community provided limited emotional support for its members. The results of our study confirm the need for community management. Our findings may also be used to develop more efficient measures to support members of online depression communities. 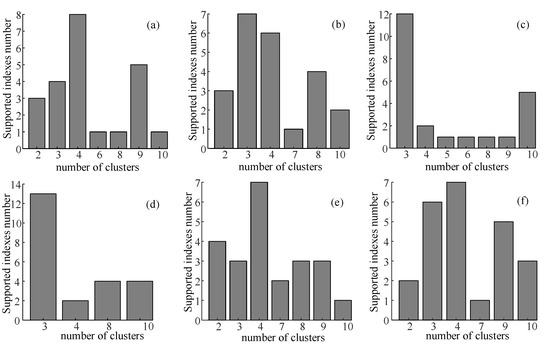 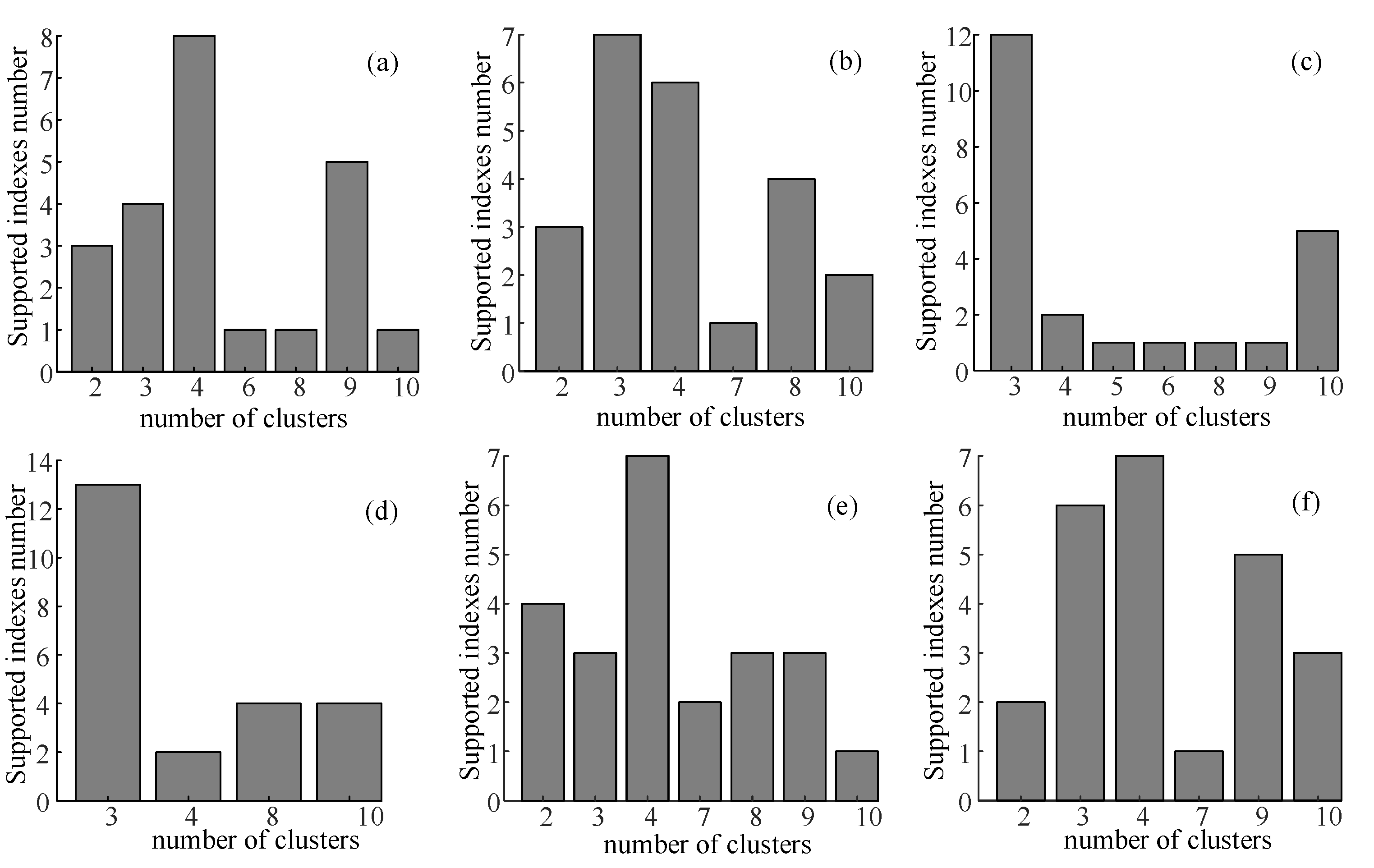 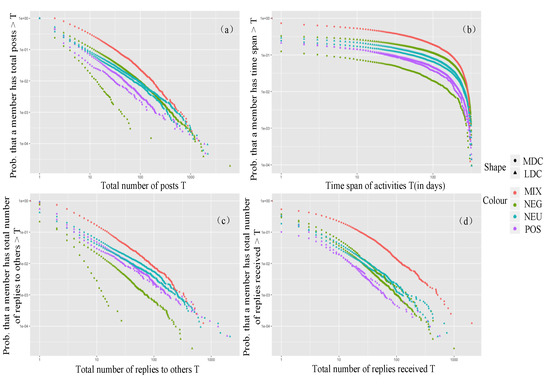 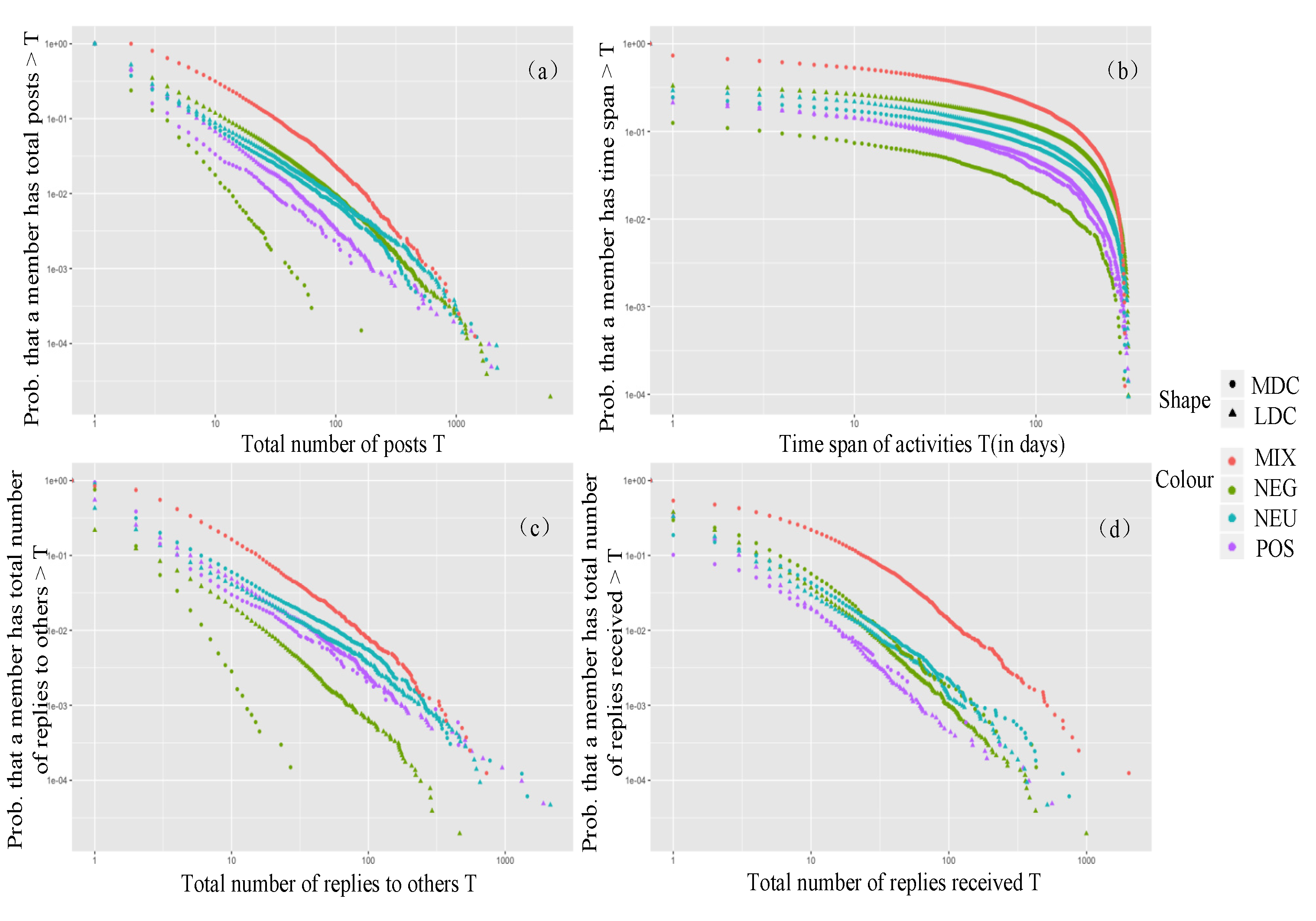 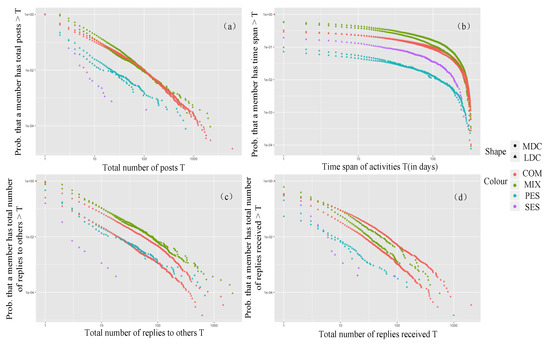 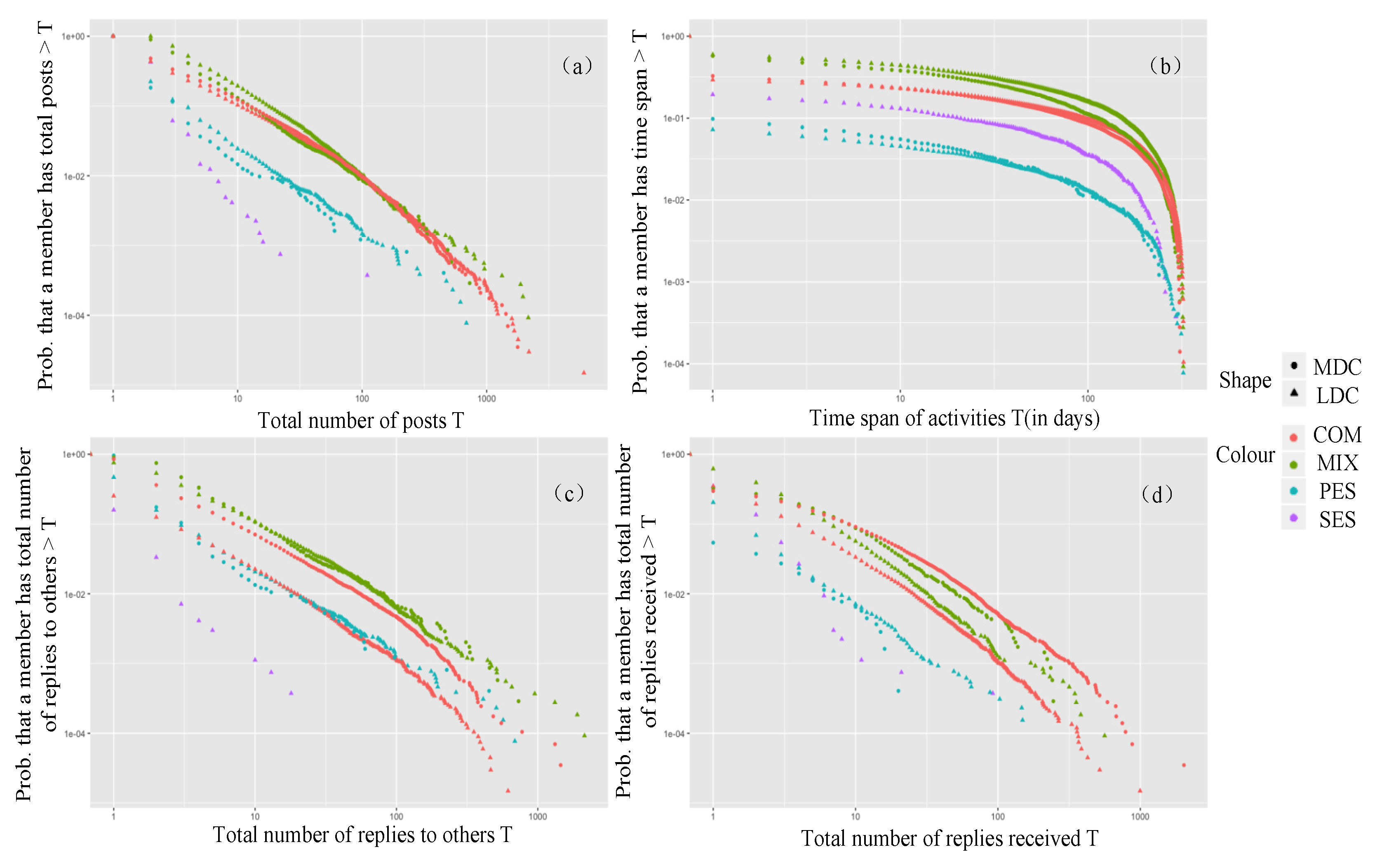 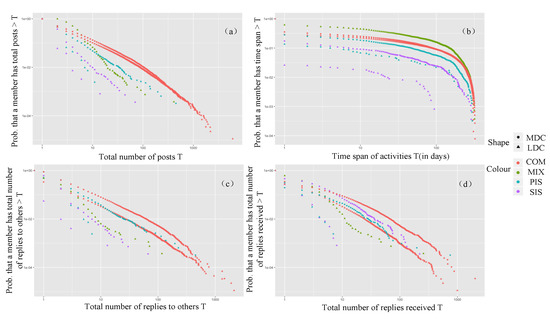 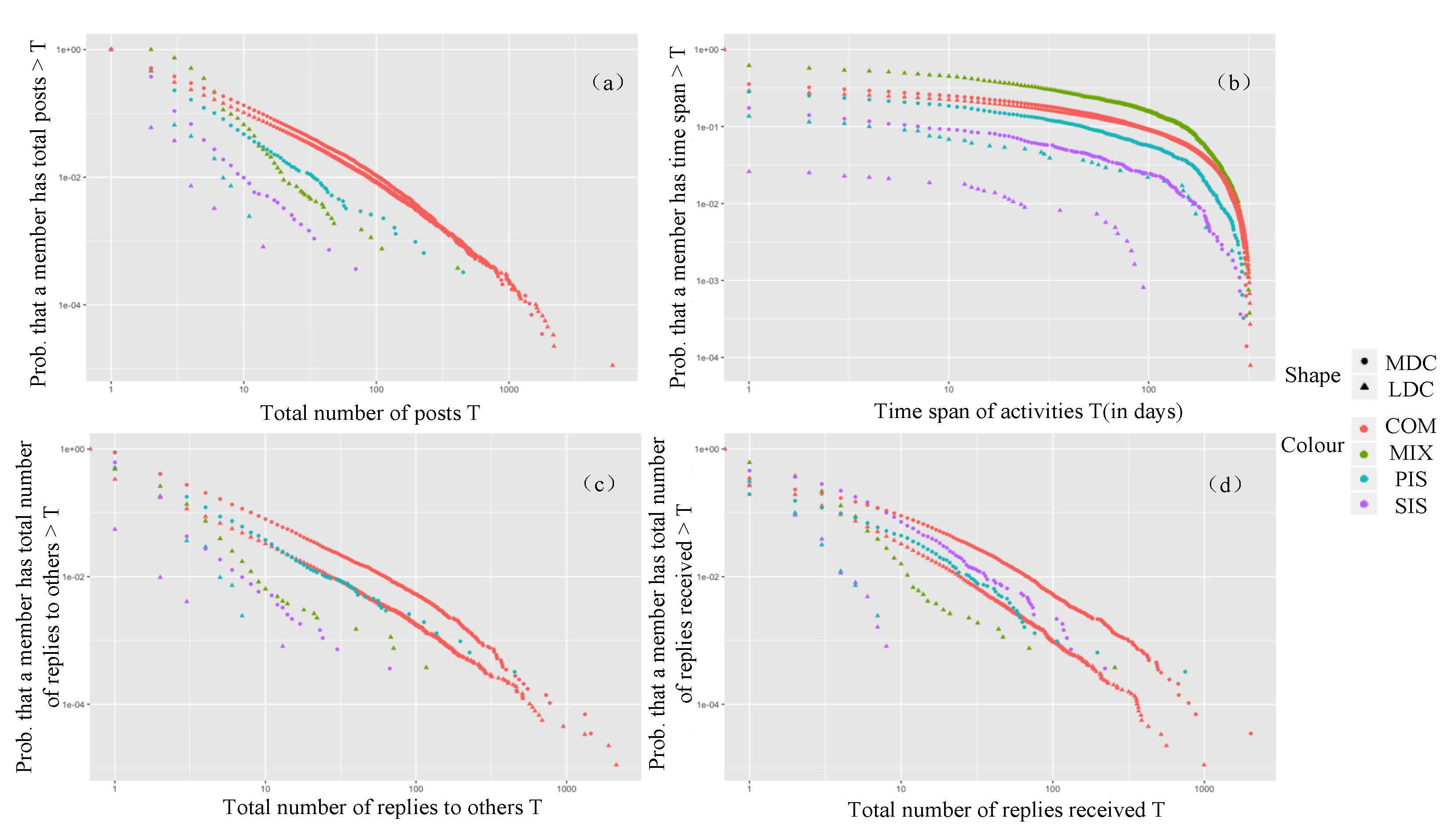