Investigation of the Impact of Land-Use Distribution on PM2.5 in Weifang: Seasonal Variations
Next Article in Special Issue

Spatial Statistics and Influencing Factors of the COVID-19 Epidemic at Both Prefecture and County Levels in Hubei Province, China

Background and objectives: Stroke is one of the leading causes of morbidity, mortality and long-term adult disability. The aim of this study was to assess the changes in body mass composition in patients after stroke in connection with selected socio-demographic and clinical factors (sex, age, type of stroke and time from the first symptoms) following the rehabilitation process. Materials and Methods: The study group consisted of 100 post-stroke subjects who participated in a comprehensive rehabilitation program for a duration of five weeks. The measurements of body composition by a Tanita MC 780 MA analyser were performed on the day of admission to hospital, on the day of discharge (after 5 weeks) and 12 weeks after discharge from hospital. Results: It was shown that before rehabilitation (Exam I) in the study group there were significant differences in body composition relative to sex, age and time from stroke. The rates of fat mass % and visceral fat level decreased after rehabilitation (Exam II) in both males and females. Exam II, at the end hospital rehabilitation, showed lower levels of fat mass %, visceral fat level, as well as fat-free mass % and higher values of total body water % and muscle mass %. In Exam III, i.e., 12 weeks after discharge, all of the parameters retained their values. Conclusions: The study shows an association between stroke risk factors (primarily age, sex and time from the onset of the first symptoms of stroke) and body mass composition resulting from rehabilitation. The type of stroke and the effects of rehabilitation on body mass components showed no differences. Comprehensive rehabilitation had a positive effect on the body mass components. View Full-Text
Keywords: stroke; stroke rehabilitation; body composition; muscle mass; fat mass stroke; stroke rehabilitation; body composition; muscle mass; fat mass
►▼ Show Figures 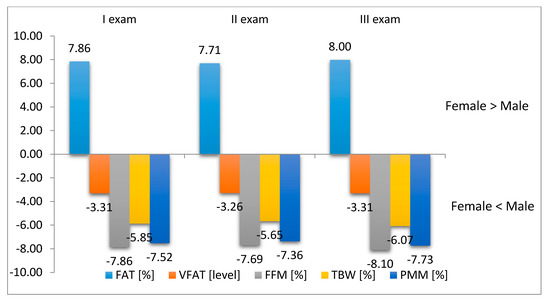