Effect of HNO3 and H2SO4 on the Paddy Ecosystem: A Mesocosm Study with Exposure at PNEC and HC50 Levels

Paddy mesocosms comprising of rice (Oryza sativa), snail (Pomacea canaliculata), and worm (Tubifex tubifex) were used to assess the damage caused by two acids (HNO3 and H2SO4) at predicted no-effect concentration (PNEC) and hazardous concentration for 50% of species (HC50) levels. In the fourth week, the fresh weight and shoot height of O. sativa at H2SO4-HC50 were reduced by 83.2% and 30.3%, respectively. Wilted leaves (%) at HC50 were approximately twice that at PNEC. No P. canaliculata and T. tubifex were recovered at HC50. At H2SO4-PNEC, the length and weight of P. canaliculata were reduced by 7.4% and 25.9%, respectively, whereas fewer adult (46.5%) and juvenile (84%) T. tubifex were recovered. In the 20th week, rice growth and productivity were correlated with initial pH (pHi) and nitrogen levels. Poor correlation with chlorophyll at the active tillering stage suggests the disturbance of nutrient uptake by roots. Partial least squares path modeling (PLS-PM) results further supported that the pHi directly affects grain yield and quality, as well as plant growth. The indirect effect via intervening fourth-week-variables was also substantial. Therefore, it is important to measure initial pH upon acid spill to estimate the risk to the paddy ecosystem. Information on the change in soil properties associated with acidity will also aid in predicting the yield and quality of grain to be harvested. View Full-Text
Keywords: rice (Oryza sativa); paddy mesocosm; acid spill; nitric acid; sulfuric acid rice (Oryza sativa); paddy mesocosm; acid spill; nitric acid; sulfuric acid
►▼ Show Figures 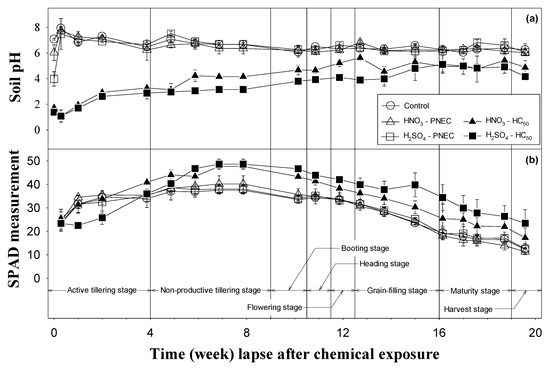