Objective: To illustrate trends in sex ratios in epithelial cancer mortality in the EU, USA, and Japan, with a focus on age-specific and cohort patterns. Methods: We obtained certified deaths and resident populations from the World Health Organisation for the period of 1970–2014 for the USA, Japan, and the EU for 12 epithelial cancer sites. From these, we calculated both the age-specific and age-standardised male-to-female mortality sex ratios. We applied an age-period-cohort model to the sex ratios in order to disentangle the effects of age, period of death, and birth cohort. Results: Age-standardised mortality sex ratios were found to be unfavourable to males, apart from thyroid cancer. The highest standardised rates were in laryngeal cancer: 7·7 in the 1970s in the USA, 17·4 in the 1980s in the EU, and 16·8 in the 2000s in Japan. Cohort patterns likely to be due to excess smoking (1890 cohort) and drinking (1940 cohort) in men were identified in the USA, and were present but less defined in the EU and Japan for the oral cavity, oesophagus, liver, pancreas, larynx, lung, bladder, and kidney. Conclusion: Mortality sex ratio patterns are partly explained by the differences in exposure to known and avoidable risk factors. These are mostly tobacco, alcohol, and obesity/overweight, as well as other lifestyle-related factors. View Full-Text
Keywords: epithelial cancer; mortality; sex ratios; age period cohort; trends epithelial cancer; mortality; sex ratios; age period cohort; trends
►▼ Show Figures 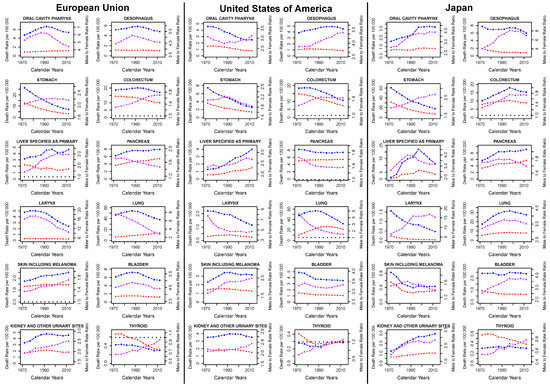