The Effects of Indoor Pollutants Exposure on Allergy and Lung Inflammation: An Activation State of Neutrophils and Eosinophils in Sputum

Background: To explore the inflammation phenotypes following indoor pollutants exposure based on marker expression on eosinophils and neutrophils with the application of chemometric analysis approaches. Methods: A cross-sectional study was undertaken among secondary school students in eight suburban and urban schools in the district of Hulu Langat, Selangor, Malaysia. The survey was completed by 96 students at the age of 14 by using the International Study of Asthma and Allergies in Children (ISAAC) and European Community Respiratory Health Survey (ECRHS) questionnaires. The fractional exhaled nitric oxide (FeNO) was measured, and an allergic skin prick test and sputum induction were performed for all students. Induced sputum samples were analysed for the expression of CD11b, CD35, CD63, and CD66b on eosinophils and neutrophils by flow cytometry. The particulate matter (PM2.5 and PM10), NO2, CO2, and formaldehyde were measured inside the classrooms. Results: Chemometric and regression results have clustered the expression of CD63 with PM2.5, CD11b with NO2, CD66b with FeNO levels, and CO2 with eosinophils, with the prediction accuracy of the models being 71.88%, 76.04%, and 76.04%, respectively. Meanwhile, for neutrophils, the CD63 and CD66b clustering with PM2.5 and CD11b with FeNO levels showed a model prediction accuracy of 72.92% and 71.88%, respectively. Conclusion: The findings indicated that the exposure to PM2.5 and NO2 was likely associated with the degranulation of eosinophils and neutrophils, following the activation mechanisms that led to the inflammatory reactions. View Full-Text
Keywords: lung inflammation; allergy; indoor pollutants; biomarkers; FeNO; eosinophil; neutrophil lung inflammation; allergy; indoor pollutants; biomarkers; FeNO; eosinophil; neutrophil
►▼ Show Figures 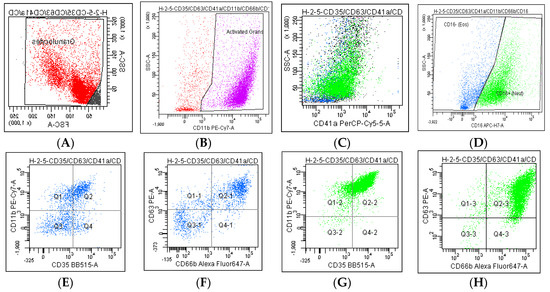