Elite Football Coaches Experiences and Sensemaking about Being Fired: An Interpretative Phenomenological Analysis

The main aim of the research was to distinguish different types of sport competition appraisals and verify if athletes’ interpretation of a stressful situation changed their choice of coping methods. Athletes change their perception during competitions; thus, we assumed that configuration of different ways of interpreting stressful events is more important for coping than one particular appraisal. In total, 193 athletes filled out The Stress Appraisal Questionnaire and The Sport Stress-Coping Strategies Questionnaire to describe their stress appraisals and undertaken coping strategies during a remembered competition that took place within a month before the study. The athletes most often appraised stressful competitions as a challenge. They preferred the coping strategy of being determined to accomplish the established goal. The athletes hardly applied techniques that constituted the basis of mental training. The cluster analysis of the competitors determined three types of sport competition appraisals: positive, negative, and active. An ANOVA with post hoc comparisons showed that participants who revealed positive appraisals undertook the highest number of actions aimed at reaching goals and least frequently sought support. Athletes should be taught not only specific strategies for coping with stress, but also more frequent use of positive judgments of sports competitions.
Keywords: stress; primary appraisal; coping; athletes stress; primary appraisal; coping; athletes

The presented results were developed on the basis of data collected from 193 athletes (95 women and 97 men) from the following summer Olympic disciplines: shooting, handball, rowing, combat sports (judo and taekwondo), volleyball, and football. They were all between 17 and 38 years old, but the majority of them were 25 years old or younger (90%). Using the categorization of elite athletes given by Swan et al. [23], the level of the competitors was marked according to the type of competition they regularly took part in (international/national competitive level) among individual athletes and according to professional leagues in team disciplines. The largest number of individual participants took part in nationwide competitions (n = 60). Other individual athletes participated in World (n = 19) and European (n = 15) championships or took part in junior provincial competitions (n = 3). Among team disciplines, 21 surveyed team athletes were playing in the top (n = 21), first (n = 19), second and third (each n = 11), fourth (n = 16), and junior (n = 18) leagues. Neither sample size calculation nor power analysis was performed a priori. A detailed characteristic of participants is presented in the Table 1.

Studies were conducted during the training camps and in training sessions in various clubs throughout Poland among adult athletes who voluntarily participated. Each participant filled out an informed consent form that was accompanied by written study information, a set of psychological questionnaires, and a survey of sociodemographic information (gender, age, and sport-related information: type of discipline, practice time, and sport level).
The criteria for choosing the examined disciplines were determined on the basis of specific situations in which the contestants found themselves during competitions and included a combination of the following aspects: individual/team performance, direct/indirect rivalry, and the degree of physical contact between players. Gender and age distributions were controlled for in particular disciplines to ensure an equal balance between the number of women and men and a balanced spread of ages. We also used the principle to collect and examine a maximum of five participants who were practicing with any given coach to exclude any potential impact from the respondents having a common environment.
For ethical and organizational reasons, the study did not take place during any competitions; rather, athletes referred to a remembered situation that took place within a month before the study. At the beginning of the questionnaires was a place where the participants were asked to write a brief description of a stressing situation during their particular remembered competition or match.
All subjects gave their informed consent for inclusion before they participated in the study. The study was conducted in accordance with the Declaration of Helsinki. However, studies were not confirmed by written consent of the ethics committee. According to Polish legislation, written approval from the ethics committee in studies using retrospective questionnaires with minimal ethical risk (i.e., that do not violate the physical integrity of participants or do not have a temporary, fluctuating, or permanent impairment in or disturbance of the functioning of the mind or brain, or where the research group does not include particularly vulnerable individuals and the data collected in the study are anonymized) was not necessary before the start of the study.

On the provided self-report questionnaires, the athletes described particular competitions they perceived as stressful and evaluated their situational appraisals and coping strategies.
The Stress Appraisal Questionnaire (SAQ), version A to assess situational stress appraisal [24] consists of a list of 35 adjectives used to describe a stressful situation where 23 of them are diagnostic items and the rest have a buffer function. Version A allows the user to measure situational appraisals that are connected to a particular situation (“This situation was for me…”, e.g., terrifying). Responses are given on a four-point scale (0–3 points); the tool allows users to distinguish four types of stressful situation appraisals: threat (nine items), harm/loss (four items), challenge-activity (five items), and challenge-passivity (five items). Reliability coefficients for the subscales were acceptable or good, between 0.71 and 0.90 [24]. The questionnaire was developed for a group of patients after myocardial infarctions, and it was not previously used with a group of athletes, which limits potential comparisons. Therefore, a confirmatory factor analysis (CFA) was performed using AMOS v25 (IBM SPSS, Chicago, IL, USA) [25] to ensure the questionnaire was appropriate for the population of athletes. The maximum-likelihood procedure was used. The following values for the adjustment indices were obtained: the χ2 value/degrees of freedom (CMIN/DF) was 1.603, the comparative fix index (CFI) was 0.944, the root-mean-square error of approximation (RMSEA) was 0.056, the Tucker–Lewis index (TLI) was 0.934, and the residual standardized root mean square (SRMR) was 0.064. The goodness-of-fit indexes met the established criteria [26]: CMIN/DF < 3, CFI > 0.90, RMSEA < 0.08, TLI < 0.95, and SRMR > 0.06. Similar results in Cronbach’s alphas obtained in this study (between 0.68 and 0.89) and the results of CFA suggest that this tool works well in a group of athletes who experience strong or prolonged stress.
The Sport Stress-Coping Strategies Questionnaire (SR3S, 27) was constructed for this study due to the lack of tools for measuring stress-coping strategies with regard to a specific competitive situation available in the Polish language. The currently applied tools primarily allow examining general life situations, but do not include specific situations involving an athlete or stress-coping techniques, which are recommended for athletes in mental training. The questionnaire includes 22 statements (with a five-point scale) about possible actions and reactions undertaken in stressful situations, grouped into four scales: setting the goal/victory, seeking support, applying mental techniques (e.g., relaxation), and planning/focusing on the activity. Cronbach’s alphas for particular scales were between 0.75 and 0.83 [27]. The SR3S has not yet been subjected to a standardization procedure. It is necessary to conduct further research with it in order to make comparisons.

Statistical analysis was performed in Statistica v13 (Stat Soft, Tulsa, OK, USA). To illustrate the types of appraisals of stressful sport competitions and to exemplify the strategies used by athletes, descriptive statistics (mean, standard deviation, skewness, kurtosis) were performed. In order to characterize the examined contestants despite a different number of statements in particular subscales of the Stress Appraisal Questionnaire, within each variable, the weighted arithmetic means were divided by the number of statements included in a given factor. The cluster analysis of the competitors was used to determine the athletes’ types of appraisal of their sport competitions. At first, the number of possible clusters was determined on the basis of the agglomerative hierarchical clustering. Then, all data were divided into clusters through k-means clustering. After that, nonparametric tests were employed to verify the significance of the differences between the obtained mean values for each type of appraisal in each cluster (due to the lack of a normal distribution). The Kruskal–Wallis ANOVA test was used to analyze the divergences between clusters. The differentiation within clusters was validated with the Wilcoxon test. At the end, to verify if the athletes’ interpretation type for a given stressful situation changed their choice of coping methods, a one-way ANOVA with post hoc comparisons (Fisher’s Least Significant Difference test–LSD) was performed. The Eta-squared (η2) estimator was used to measure the effect size for significant comparisons in ANOVA. Additionally, a t-Student test of independent samples was carried out in order to verify the significance of the differences between the mean values of each coping strategy in the examined subgroups. Statistical significance was defined for p-values lower than 0.05.

3.1. Appraisal of Stress and Undertaken Coping Strategies during Sport Competitions

With regard to the dominating method of cognitive appraisal, the majority of athletes perceived competitions as a challenge that led to increased activity (60% of participants). The remaining athletes appraised competitions as a challenge that did not trigger action (18%), as a loss (16%), or as a threat (5%). Within the types of stress-coping strategies during competitions, athletes most often aimed to achieve a certain goal or victory (mean (M) = 3.89, SD = 0.83). The least frequent strategies employed during stressful competitions were those related to seeking support (M = 2.76, SD = 0.92) and using mental techniques (M = 2.62, SD = 1.11). Particular means and SDs are shown in Table 2.

3.2. The Types of Stress Appraisal

3.3. The Types of Appraisal against the Undertaken Stress-Coping Strategies

During competitions, athletes most often apply positive types of stress appraisal (as a challenge), as well as problem-focused coping strategies (aimed to achieve a certain goal or victory and connected to planning or focus on an activity). Moreover, people who apply positive appraisals undertake the largest number of activities in order to cope with stress; thus, they may be considered the most flexible in coping. The results from this study extend the literature on stress and coping by introducing a new view of stress appraisal as a configuration of different ways of interpreting stressful events, as opposed to treating particular appraisals as separate aspects. From a practical perspective, athletes should be taught not only specific strategies for coping with stress, but also more frequent use of positive judgments of sports competitions. Athletes need to be able to cope with stressors associated with competition, not only to achieve the best results, but also to enjoy their sports experience. 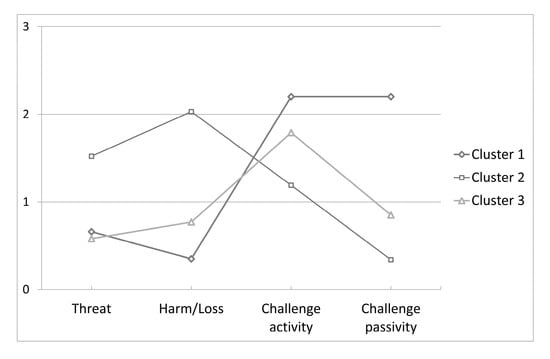 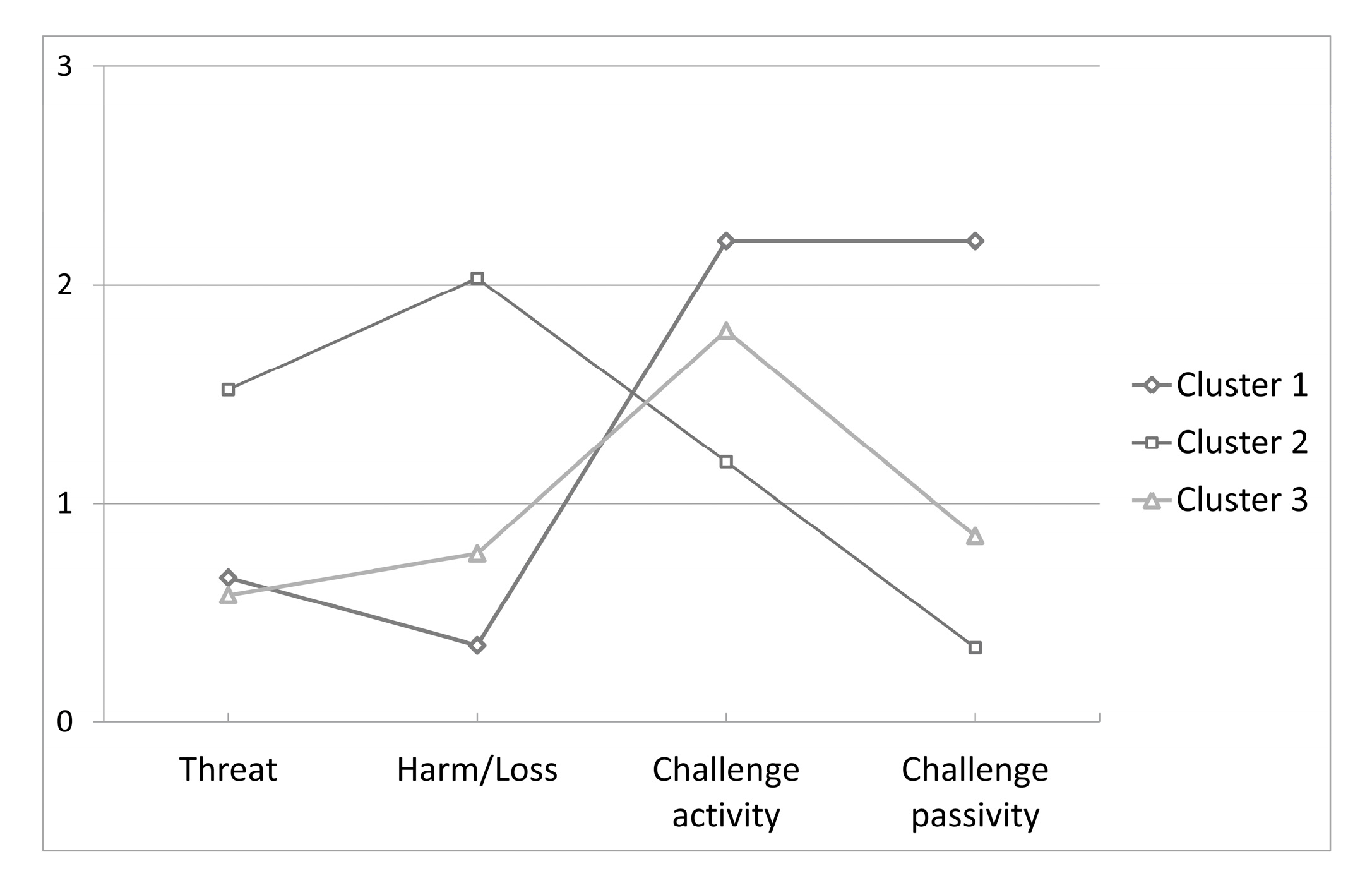