Can Childcare Work Be Designed to Promote High Intensity Physical Activity for Improved Fitness and Health? A Proof of Concept Study of the Goldilocks Principle
Previous Article in Journal

Adapting Citizen Science to Improve Health in an Occupational Setting: Preliminary Results of a Qualitative Study

Seafarers often work in unstable and confined living environments for several months at a time. Since the unique living conditions at sea require seafarers to exert more physical and neurological effort to maintain regular physical conditions (e.g., movement, position, and balance) [1,2], significant lifestyle changes and health risks in the seafaring population have been reported. For example, Hjarnoe and Leppin examined health risks among Danish seafarers and reported that significant lifestyle changes were associated with health hazard factors, such as a low level of fitness and metabolic syndrome [3]. Moreover, Scovill and colleagues investigated lifestyle-related cardio-metabolic disease among seafarers on vessels in United States’ inland waterways and identified various chronic disease risk factors, such as a high prevalence of physical inactivity and obesity [4]. Research by Kamada also found that crew members aboard a ship complained of neurotic symptoms and chronic fatigue [5].
Though these studies have contributed valuable knowledge on the health aspects of the maritime population, the outcomes have primarily relied on subjective measures (e.g., interviewing and self-report questionnaires) to quantify physical activity and sleep patterns. Few unobstructed, objective physical activity and sleep measurement studies have been conducted to assess seafarers’ key health behaviors. In this study, a wearable sensor was utilized to objectively assess seafarers’ physical activity and sleep patterns in the unique living conditions at sea. Since wearable sensors are advantageous over subjective measures in terms of feasibility, validity, and reliability, wearable sensors have been widely utilized in various physical activity and sleep assessment studies [6,7,8,9].
Therefore, the purpose of this study was to compare the intensity of physical activity and the sleep patterns of seafarers in the following three conditions: (1) mooring versus sailing, (2) on-navigation duty and off- navigation duty, and (3) day versus night navigation duty. Twenty-four-day voyages across sea routes in South Korea, Singapore, and Vietnam were selected to represent typical maritime navigation conditions of open sea voyages in the Asia-Pacific region.

The study protocol was approved in advance by the Institutional Review Board (IRB) at the University of Nebraska Medical Center. The principal investigator used a recruitment flyer and word-of-mouth to invite participants. All participants (N = 51; 10 females and 41 males) were senior apprentices on one of two training ships from the Mokpo National Maritime University in South Korea. All participants were students in the navigation department. Volunteer apprentices from the engineering department were not eligible to participate. Before initiating the study, self-reported age (22.8 ± 2.0 years), weight, and height were obtained (Table 1). As a minimum requirement for onboard training, all trainee have to officially report their medical condition to the government authority. Based on the medical condition report, it was confirmed that the participants for the study did not have any pre-existing medical condition as navigation officers.
All participants were made aware of the procedures and purpose of the research before they signed the informed consent form (IRB No.: 273-16-EP).

A single wrist-worn accelerometer was used to collect data on participants’ physical activity and sleep patterns for four consecutive days under both mooring and sailing conditions. Participants were asked to wear a single ActiGraph GT9X Link (ActiGraph, Pensacola, FL, USA) attached to the dominant wrist with an elastic strap. The sensor uses a triaxial accelerometer and is appropriate to collect data on seafarers’ activity aboard a ship because of its light weight (i.e., 14 grams), memory space (i.e., four gigabytes), and high water resistance. The ActiGraph GT9X Link has been extensively validated with diverse samples in physical activity [9,10,11] and sleep research [12,13,14]. The wearable sensor measures both gravity and wrist movement, and the sampling frequency was set to 100 Hz, which was similar to the frequency employed in previous studies [15,16].
The physical activity level was estimated using the GGIR R-package (GGIR) [17]. GGIR is freely available and enables the processing and analysis of three-dimensional acceleration data. The signal processing includes automatic calibration, the detection of abnormally high acceleration values, the detection of non-wear, and the calculation of the average magnitude of dynamic acceleration [17,18]. The outcome parameters were used to calculate moderate to vigorous intensity physical activity (MVPA) in one-minute intervals per 24-h period. Within each condition, the mean number of MVPA minutes over a 24-h period was calculated.
ActiLife software (ActiGraph, Pensacola, FL, USA) was used to estimate sleep variables from the raw data using the validated Sadeh algorithm [19,20]. The acceleration data were processed in one-minute intervals. The sleep variables included (1) the total sleep time (TST), (2) the number of awakenings (NoA), and (3) the sleep fragmentation index (SFI). The TST was measured as the total sleep duration in minutes, from falling asleep to awakening. The NoA was the number of awakenings lasting more than five minutes. The SFI represents an index of restlessness during the TST, described as a percentage [21,22]. The higher the SFI value, the poorer the sleep quality.
The annual sailing plan of the training ship that was employed in the study contained sixteen voyages per year. The annual sailing plan consisted of fourteen coastal voyages (i.e., sailing between Korean ports) and two international voyages. The experiment was conducted during the second semester, and experiment participants had experienced twelve domestic voyages and one international voyage before the experiment. Data were collected from participants on three sea voyages: (1) from the Port of Mokpo in South Korea to the Port of Singapore in Singapore (N = 23), (2) from the Port of Singapore to the Port of Da Nang in Vietnam (N = 11), and (3) from the Port of Da Nang to the Port of Mokpo (N = 17). At the beginning of each voyage, participants were asked to wear the wearable sensor at least for four consecutive days except while bathing. The sea routes, represented in Figure 1, totaled approximately 5100 nautical miles passing through the East China Sea, South China Sea, Singapore Strait, and the Gulf of Thailand.
The selected sea voyage routes are representative of sea routes in today’s maritime shipping industry. More than half of the annual merchant fleet tonnage worldwide and one-third of maritime traffic worldwide passes through these sea routes [23]. Therefore, the ships’ navigation conditions in this study were suitable for investigating seafarers’ physical activity and sleep patterns in merchant marine vessels. The ships’ sailing plans included about 15 days of sailing and 9 days of mooring at ports in both Singapore and Da Nang, Vietnam. 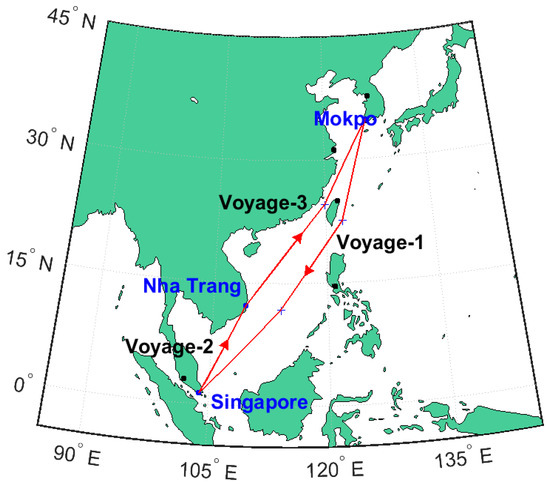 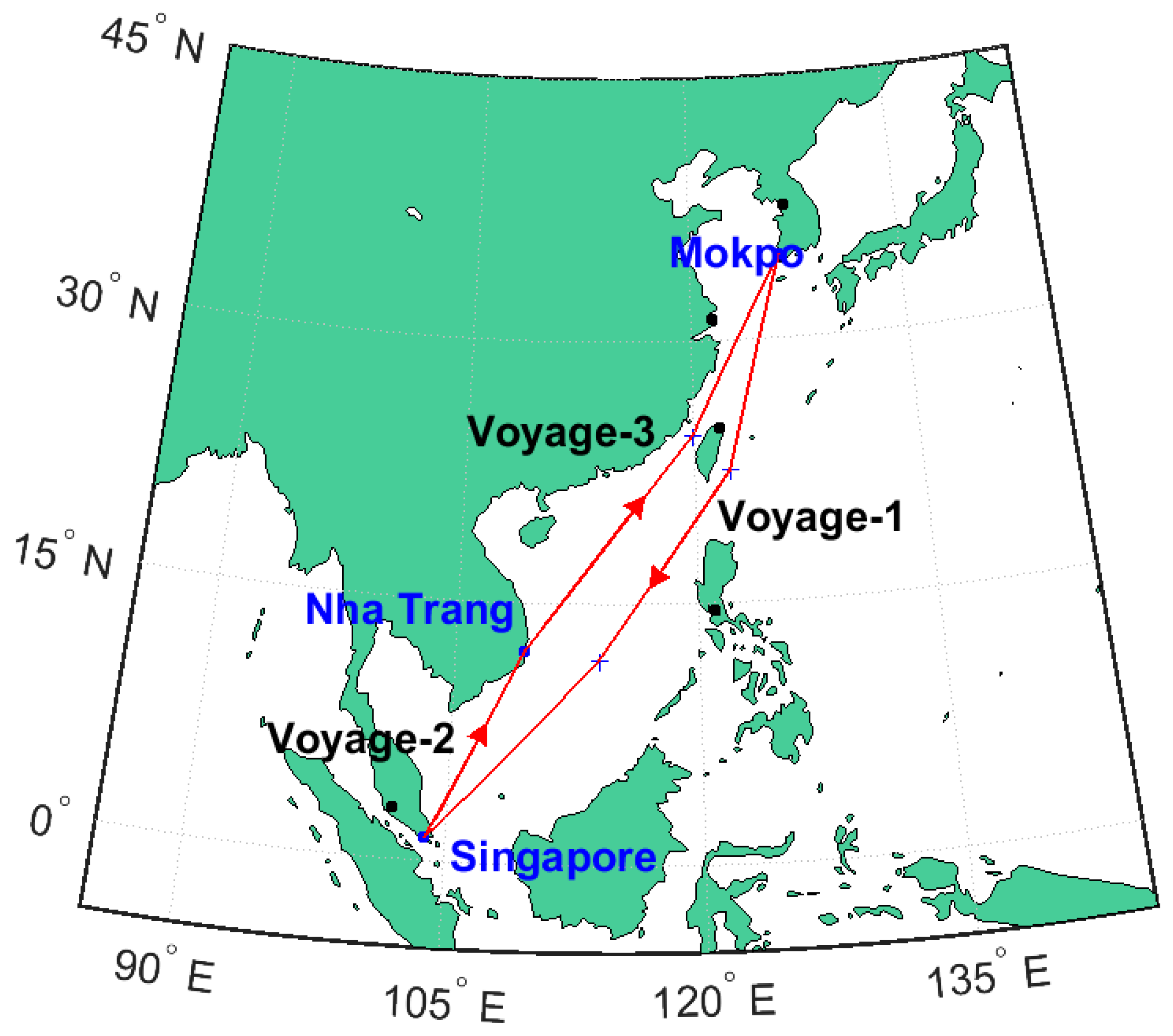 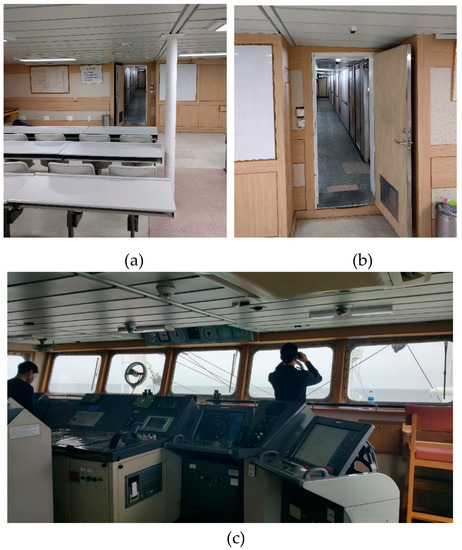 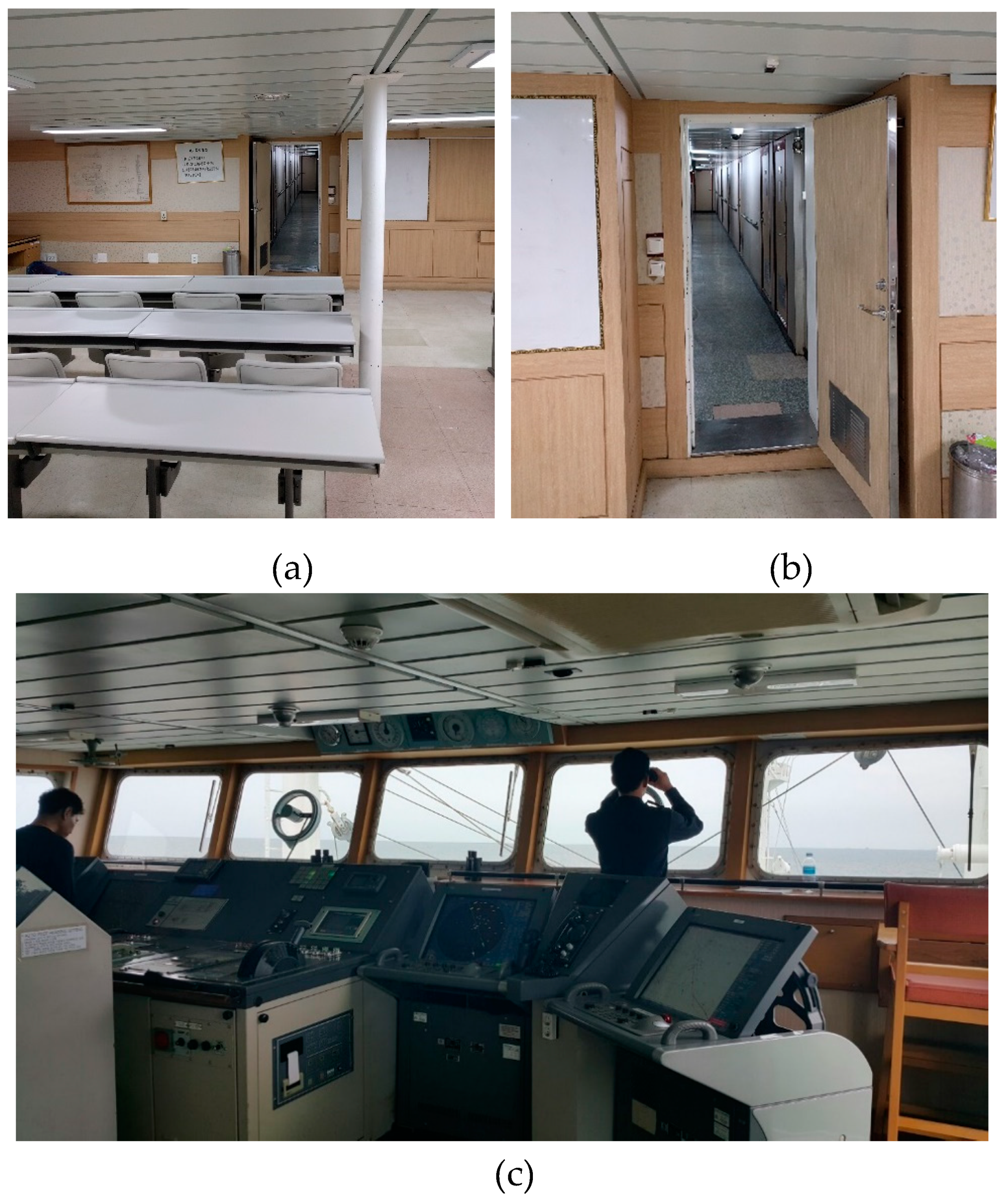