Perceptions of the Use of Alcohol and Drugs after Sudden Bereavement by Unnatural Causes: Analysis of Online Qualitative Data
Previous Article in Journal

Substance Use among Spanish Adolescents: The Information Paradox

This aim of this paper is to determine the relationship between the consumption of tobacco, cannabis, and alcohol (including drunkenness and binge drinking consumption patterns) in the previous 30 days by Spanish adolescents and the information that is available to adolescents on drug consumption. This cross-sectional study employed data from the Survey on Drug Use in Secondary Education in Spain (ESTUDES 2016), which was conducted on students aged 14 to 18 (n = 35,369). Contingency tables, mean comparison tests, and logistic regression analyses were conducted and prevalence ratios (PR) were obtained. The results show that the probability that an adolescent will smoke tobacco is associated with whether their mother and/or father smoke (PR: 1.30), whether some of their friends smoke (PR: 14.23), whether the majority of their friends smoke (PR: 94.05) and how well informed they perceive themselves to be (PR: 1.30). Cannabis use is mainly associated with whether most of their friends also use cannabis (PR: 93.05) and whether they are sufficiently informed regarding this consumption (PR: 1.59). Alcohol consumption is associated with whether their mothers drink regularly (PR: 1.21), whether most of their friends drink (PR: 37.29), and whether they are well informed (PR: 1.28). Getting drunk and binge drinking are associated with whether their friends have these behaviors (PR: 44.81 and 7.36, respectively) and whether they are sufficiently informed (PR: 1.23 for both behaviors). In conclusion, the consumption of these substances is more frequent among Spanish adolescents who believe that they are better informed and whose friends have similar patterns of consumption. View Full-Text
Keywords: adolescents; alcohol; tobacco; cannabis; information on drugs adolescents; alcohol; tobacco; cannabis; information on drugs
►▼ Show Figures 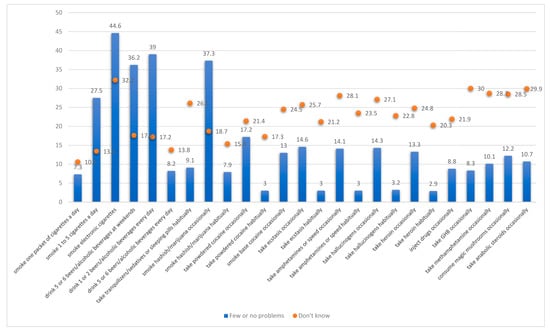