Health Impact of Air Pollution from Shipping in the Baltic Sea: Effects of Different Spatial Resolutions in Sweden
Previous Article in Journal

Use of Non-Cancer Medications in New Zealand Women at the Diagnosis of Primary Invasive Breast Cancer: Prevalence, Associated Factors and Effects on Survival

Background: Assessing the use of multiple medications in cancer patients is crucial as such use may affect cancer outcomes. This study reports the prevalence of non-cancer medication use at breast cancer diagnosis, its associated factors, and its effect on survival. Methods: We identified all women diagnosed with primary invasive breast cancer between 1 January 2007 and 31 December 2016, from four population-based breast cancer registries, in Auckland, Waikato, Wellington, and Christchurch, New Zealand. Through linkage to the pharmaceutical records, we obtained information on non-cancer medications that were dispensed for a minimum of 90 days’ supply between one year before cancer diagnosis and first cancer treatment. We performed ordered logistic regressions to identify associated factors and Cox regressions to investigate its effect on patient survival. Results: Of 14,485 patients, 52% were dispensed at least one drug (mean—1.3 drugs; maximum—13 drugs), with a higher prevalence observed in patients who were older, treated at a public facility, more economically deprived, and screen-detected. The use of 2–3 drugs showed a reduced non-breast cancer mortality (HR = 0.75, 95%CI = 0.60–0.92) in previously hospitalised patients, with other groups showing non-significant associations when adjusted for confounding factors. Drug use was not associated with changes in breast cancer-specific mortality. Conclusions: Non-cancer medication use at breast cancer diagnosis was common in New Zealand, more prevalent in older and disadvantaged women, and showed no effect on breast cancer-specific mortality, but a reduction in other cause mortality with the use of 2–3 drugs. View Full-Text
Keywords: breast cancer; medication use; polypharmacy; survival breast cancer; medication use; polypharmacy; survival
►▼ Show Figures 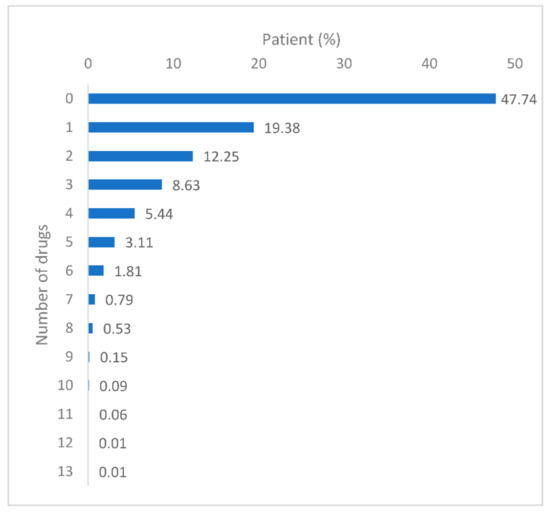