A Low-Intensity Internet-Based Intervention Focused on the Promotion of Positive Affect for the Treatment of Depression in Spanish Primary Care: Secondary Analysis of a Randomized Controlled Trial
Next Article in Special Issue

Physical Activity, Resilience, Sense of Coherence and Coping in People with Multiple Sclerosis in the Situation Derived from COVID-19
Previous Article in Journal

Use of Neurodynamic or Orthopedic Tension Tests for the Diagnosis of Lumbar and Lumbosacral Radiculopathies: Study of the Diagnostic Validity

(1) Background: Although the current literature shows that daylight saving time (DST) may play a role in human health and behavior, this topic has been poorly investigated with reference to Obstetrics. The aim of this case–control study was to evaluate whether DST may influence the number of spontaneous deliveries. (2) Methods: A low-risk pregnancy cohort with spontaneous onset of labor (n = 7415) was analyzed from a single Italian region for the period 2016–2018. Primary outcome was the number of spontaneous deliveries. Secondary outcomes were: gestational age at delivery, type and time of delivery, use of analgesia, birth weight, and 5-min Apgar at delivery. We compared the outcomes in the two weeks after DST (cases) to the two weeks before DST (controls). (3) Results: Data showed no significant difference between the number of deliveries occurring before and after DST (Chi-square = 0.546, p = 0.46). Vaginal deliveries at any gestational age showed no statistical difference between the two groups (Chi-square = 0.120, p = 0.73). There were no significant differences in the secondary outcomes, as well. (4) Conclusions: DST has neither a significant impact on the number of deliveries nor on the obstetric variables investigated by this study.
Keywords: daylight saving time (DST); desynchronization; circadian rhythm; chronobiology; nursing; spontaneous delivery; midwifery; obstetrics daylight saving time (DST); desynchronization; circadian rhythm; chronobiology; nursing; spontaneous delivery; midwifery; obstetrics

The mechanism that starts the spontaneous onset of labor still remains an unanswered question in the current literature [1]. In the obstetric field, scientific research is rich in studies, conducted both in vitro and in vivo, explaining the action of hormones in the onset and maintenance of labor during birth by correlating it with the circadian cycle [2]. Cortisol is the main stress hormone responsible for the normal adaptation of the neonate to extrauterine life. Placental corticotrophin releasing hormone (CRH) is active from the early weeks of pregnancy and determines its duration, the time of onset of labor, and the timing of delivery; moreover, its plasma levels increase rapidly near the beginning of spontaneous labor. Data suggest that CRH may have a pivotal role in activating the mechanism of delivery [3,4,5]. In addition, type of delivery, e.g., vaginal or caesarean, may determine a different stress response. Recently, a study compared the activity of 11beta-hydroxysteroid dehydrogenase type 2 (11β-HSD 2) in the placenta and the umbilical cord blood cortisol level between caesarean sections, with or without uterine contraction, and vaginal delivery groups [6]. No statistically significant differences in the activity of 11β-HSD 2 were found in placentas delivered via caesarean sections compared to vaginal deliveries, while umbilical cord blood cortisol in the elective caesarean sections group was significantly lower compared to the vaginal deliveries and intrapartum caesarean sections [6]. Sleep disturbances and alterations in the circadian rhythm can lead to an increase in the levels of stress hormones and the activation of a pro-inflammatory condition can trigger and enhance the activity of prostaglandins and oxytocin, by promoting uterine contractions, the dynamic phenomena of labor, and consequently, the onset of labor [4,5,6,7]. These alternations can also be induced by shift work; in fact, women who experience an alteration of their circadian rhythm due to work are significantly more exposed to a reduction in birth rate and a lower birth weight of their newborns [8]. The purpose of the so-called “Summer time” was to capitalize on natural daylight: by turning the clock one hour forward as the days get longer in Spring, sunset is delayed by this same hour, until the clock is set back again in Autumn. After a first phase of Daylight Saving Time (DST) policy, where single countries decided their own standards, not regulated, harmonization attempts began in the 1970s to facilitate the effective operation of the internal market, and this practice is applied in over 60 countries worldwide [9]. Since light–dark alternation influences the synchronization of circadian rhythms of most human systems, DST may cause a chrono-disruption by significantly altering circadian rhythm and negatively influencing sleep quality [10]. A growing amount of evidence showed that DST transition may have negative effects on health [11,12,13,14,15,16]. Thus, based on these premises, an international consensus statement suggested that DST cannot be encouraged and therefore, should be discontinued [17].
As for female reproduction, disruptions of circadian rhythms, e.g., shift work, jet lag, and DST, have been associated with poorer fertility and early pregnancy outcomes [18]. However, very few data are available on the effect of DST on the onset of spontaneous labor. Only one recent published study showed no significant association between DST circadian rhythm and the number of spontaneous deliveries [19]. Based on this hypothesis, we evaluated whether DST might affect the number of spontaneous deliveries in a single Italian region.

A cohort of 7415 deliveries from low risk pregnancies with spontaneous onset of labor was enrolled in this case–control study. We used the Certificate of Childbirth Assistance (CedAP) data collection from one single Italian region, Emilia-Romagna, in the period 2016–2018. We identified the exact dates of DST during each year analyzed (Figure 1). Age and gestational age were evaluated. We defined the 2 weeks after DST as the exposure period and the 2 weeks before DST as the control period.
Exclusion criteria are shown in Table 1.
The primary outcome was defined as the number of deliveries, in particular the number of non-operative vaginal deliveries.
The rationale underlying the choice of the latter outcome was to exclude, as far as possible, the conditioning acted out by the health workers and the healthcare organizational system that weighs on the birth path, in order to bring out the influences that the endocrine and central nervous systems have on childbirth.
Secondary outcomes were:
We also analyzed local data relating to individual provinces. In particular, the number of at term deliveries that occurred in the three-year period was considered in the various Emilia-Romagna provinces, in order to verify whether there were any differences related to DST. The statistical analysis of the data was performed with the “chi-square” test.
We considered a 5% error with a confidence interval of 95%, standard deviation of 0.5, and z-score of 1.96.
The differences in the number of deliveries across the Spring and Autumn shifts were assessed for significance using the Poisson Means Test.
Annual birth rate was calculated as the ratio between the number of births during the two weeks pre and post DST, and the mean value of births obtained by the sum of births in the previous and the considered year divided by 2. The ratio was then multiplied by 103. This calculation was performed for any year considered in this study.
N = number of births during the index 2 weeks;
X = year considered;
x−1 = previous year;
B = total births in the Emilia-Romagna region of Italy.
In addition, we calculated the age and gestational age of participants. A logistic regression analysis was carried out, where the period including the two weeks pre and post DST was the dependent variable and the other parameters investigated in this study the independent ones. A 2-sided p-value < 0.05 was considered statistically significant. IBM Statistical Package for Social Science (SPSS 13.0 for Windows, SPSS Inc., Chicago, IL, USA) was used.

There were no significant differences in the secondary outcomes analyzed, between what was detected during the exposure period and what was found in the control period (Table 4).
Women’s age was independently associated with delivery during the two weeks post DST (OR 1.010, 95% Confidence intervals 1.002–1.019, p = 0.021). All the other investigated parameters were not associated with the period of the DST. Therefore, every year of increasing age of the delivering woman increased the risk of event occurrence during the two weeks after DST of 1.0% (Table 5).
Finally, we assessed the percentages of type and time of delivery during the Spring and Autumn shifts, but we could not find any difference (data not shown).

This study shows no differences in the number of deliveries in the weeks following the change of time compared to those that precede it, neither during the Spring nor in the Autumn. This finding provides further confirmation to previous data obtained at quite different conditions of latitude, climate, and light exposure. It is possible that the multihormonal etiology of labor may explain this phenomenon. It would be interesting to extend the study to different latitudes and ethnicities, in order to verify whether our findings could be generalized or not.

This study is supported by a scientific grant by the University of Ferrara (Fondo Incentivazione Ricerca-FIR- 2020, Roberto Manfredini). 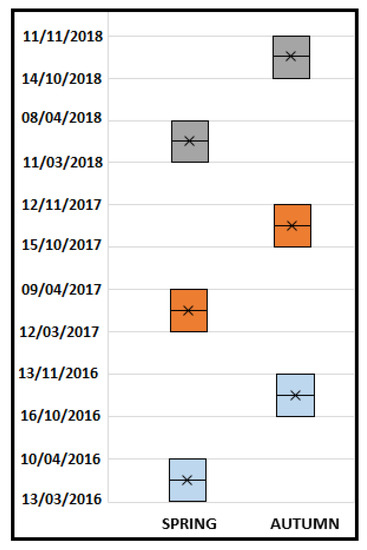 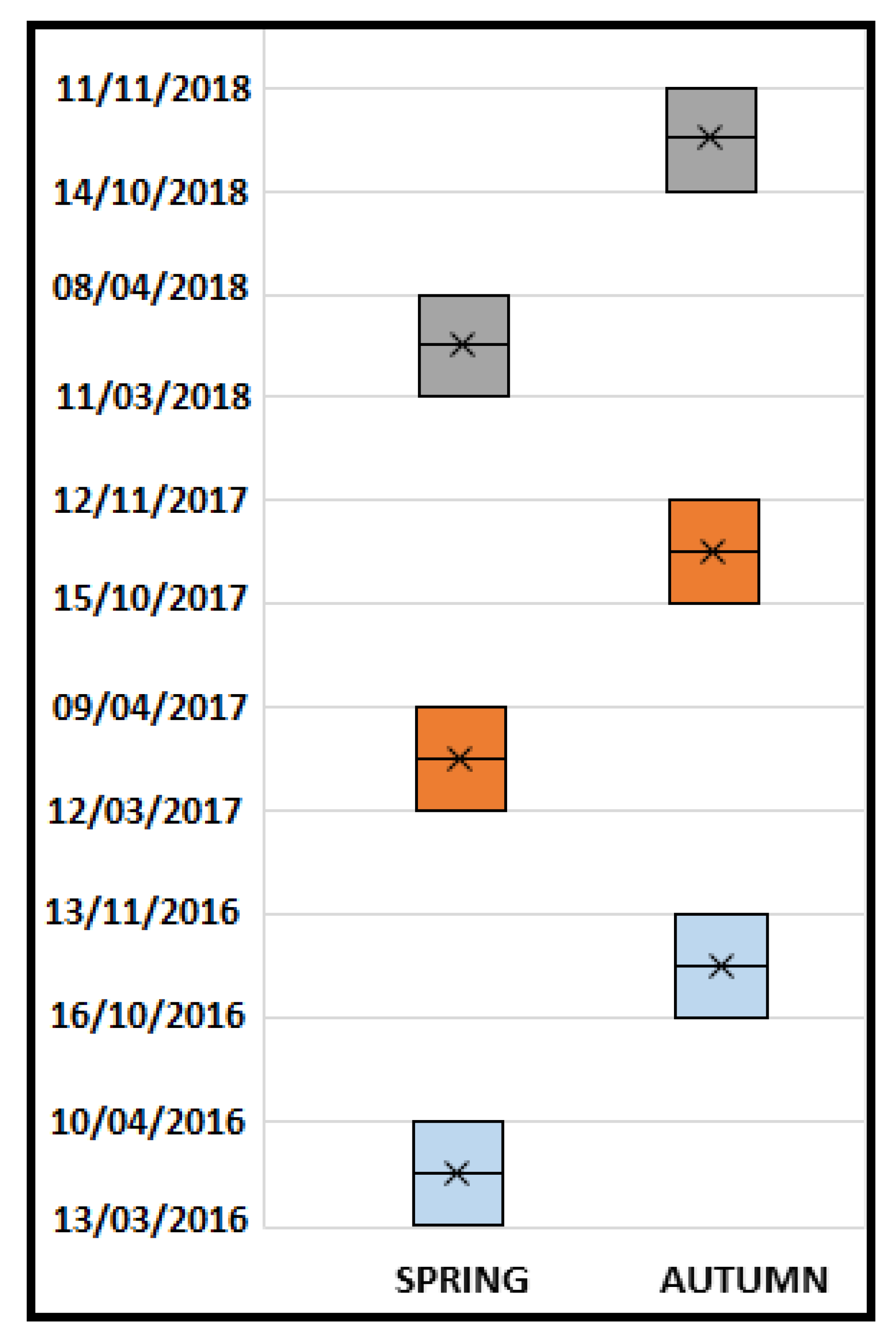