Impact of Palliative Care in Evaluating and Relieving Symptoms in Patients with Advanced Cancer. Results from the DEMETRA Study

Background: Cancer patients experience multiple symptoms throughout the course of the disease. We aimed to provide a comprehensive analysis of the symptom burden in patients with advanced cancer at admission to specialist palliative care (PC) services and seven days later to estimate the immediate impact of PC intervention. Patient and methods: The analysis was based on an observational, prospective, multicenter study (named DEMETRA) conducted in Italy on new patients accessing network specialist PC centers during the period May 2017–November 2017. The prevalence and intensity of symptoms were assessed at baseline and after seven days using three tools including the Edmonton Symptom Assessment System (ESAS). Results: Five PC centers recruited 865 cancer patients. Thirty-three different symptoms were observed at the baseline, the most frequent being asthenia (84.9%) and poor well-being (71%). The intensity of the most frequent symptoms according to ESAS ranged from 5.5 for asthenia to 3.9 for nausea. The presence and intensity of physical symptoms increased with increasing levels of anxiety and depression. After seven days, prevalence of nausea and breathlessness as well as intensity of almost all symptoms significantly decreased. Conclusions: The study confirmed the considerable symptom burden of patients with advanced cancer. PC intervention has significantly reduced the severity of symptoms, despite the patients’ advanced disease and short survival. View Full-Text
Keywords: cancer patients; palliative care; symptoms cancer patients; palliative care; symptoms
►▼ Show Figures 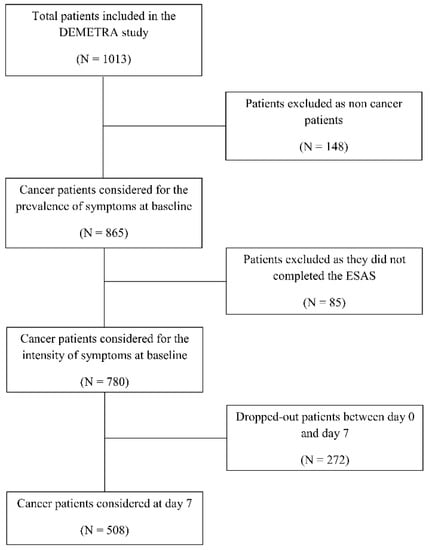