Perceived Factors of Stress and Its Outcomes among Hotel Housekeepers in the Balearic Islands: A Qualitative Approach from a Gender Perspective
Previous Article in Journal

The Roles of Work-Life Conflict and Gender in the Relationship between Workplace Bullying and Personal Burnout. A Study on Italian School Principals

The present review aims to examine the effects of high blood lactate levels in healthy adult humans, for instance, after a period of exhaustive exercise, on the functioning of the cerebral cortex. In some of the examined studies, high blood lactate levels were obtained not only through exhaustive exercise but also with an intravenous infusion of lactate while the subject was immobile. This allowed us to exclude the possibility that the observed post-exercise effects were nonspecific (e.g., cortical changes in temperature, acidity, etc.). We observed that, in both experimental conditions, high levels of blood lactate are associated with a worsening of important cognitive domains such as attention or working memory or stress, without gender differences. Moreover, in both experimental conditions, high levels of blood lactate are associated with an improvement of the primary motor area (M1) excitability. Outside the frontal lobe, the use of visual evoked potentials and somatosensory evoked potentials allowed us to observe, in the occipital and parietal lobe respectively, that high levels of blood lactate are associated with an amplitude’s increase and a latency’s reduction of the early components of the evoked responses. In conclusion, significant increases of blood lactate levels could exercise a double-action in the central nervous system (CNS), with a protecting role on primary cortical areas (such as M1, primary visual area, or primary somatosensory cortex), while reducing the efficiency of adjacent regions, such as the supplementary motor area (SMA) or prefrontal cortex. These observations are compatible with the possibility that lactate works in the brain not only as an energy substrate or an angiogenetic factor but also as a true neuromodulator, which can protect from stress. In this review, we will discuss the mechanisms and effects of lactic acid products produced during an anaerobic exercise lactate, focusing on their action at the level of the central nervous system with particular attention to the primary motor, the somatosensory evoked potentials, and the occipital and parietal lobe. View Full-Text
Keywords: acute exercise; cognition; physical health; sports stress; blood lactate acute exercise; cognition; physical health; sports stress; blood lactate
►▼ Show Figures 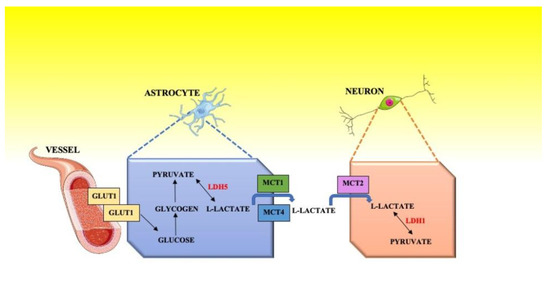