Incidence and Survival Trends of Pancreatic Cancer in Girona: Impact of the Change in Patient Care in the Last 25 Years
Next Article in Special Issue

Gender Diverse Children and Adolescents in Italy: A Qualitative Study on Specialized Centers’ Model of Care and Network
Previous Article in Special Issue

How Does Sexual Harassment Influence the Female Employee’s Negative Response in a Deluxe Hotel?

Sexual harassment, which is one symptom of social discrimination that occurs when a person becomes subject of unwanted sexual debate, gesture, or action, is presently a critical problem and at the center of attention throughout many organizational environments [1]. The current #MeToo movement raised the public’s awareness of the problem of sexual harassment that women experience within organizations. The movement not only captured the possibility of sexual harassment’s omnipresence within daily workplace functions but also made it clear that people should not be silenced [2]. Today, organizations face risky legal and financial consequences stemming from a single sexual harassment event [3]. Although research on workplace sexual harassment is closely related to psychological health disorders, current longitudinal research on this relationship is scarce. In particular, people working in an environment that involves strong social interaction and stress, such as deluxe hotels, are exposed to excessive psychological distress [4,5]. Due to this type of stressful working environment [6], circumstances of workplace harassment inside such organizations are often specifically silenced [7,8]. For this reason, creating an environment in deluxe hotels where sexual harassment does not occur is a very important factor that can determine the success or failure of the organization. Despite this importance, there is scarce prior study related to this issue. Therefore, this study examines whether the perception of sexual harassment among female employees causes psychological distress and workplace deviant behavior, as well as investigates the moderating role of organizational silence and psychological detachment in the causal relationship (Figure 1).

2.1. Sexual Harassment in the Hospitality Sector

The sample for this study consisted of female employees working in deluxe hotels (five-star hotels) located in Seoul, South Korea. Among 22 deluxe hotels located in Seoul, the researcher chose 10 of the hotels that agreed to participate in the survey. The sample was restricted to female employees working in the food and beverage department because many previous studies reported that women are relatively more exposed to sexual harassment situations than men. After the researcher provided sufficient explanation of the purpose and methodology of the study, the subjects, who voluntarily decided to participate in the survey, wrote answers to the questionnaire on a separately prepared space. The researcher reminded responders that the collected data will be used for research purposes only and that it will remain confidential. For even distribution of the extracted samples among the hotels, 50 copies of the questionnaire were distributed to each of the 10 hotels, utilizing the convenience sampling method. At each meeting, the participants received a five-dollar coffee coupon for completing the survey. A total of 350 questionnaires were distributed, among which 312 copies were received. We conducted final analysis on 295 responses (84.29%). Prior to the main analysis, the researcher implemented data screening and analyzed descriptive statistics to verify whether the normality assumption was satisfied. The mean age of the employees was 29.47 (±6.24) years, and 47.7% were between 21 and 29 years old. Additionally, their education levels were found as primarily college (45.3%) and university degree (52.7%), and 62.4% worked in a deluxe hotel for less than 10 years. In addition, job position was indicated as part-time employee (21.8%) and full-time employee (78.2%).

The questionnaire consisted of six parts. The first part contained questions about the participants’ demographic information (e.g., age, education, and tenure. The second part requested employees to rate their overall perception of sexual harassment. To measure employees’ perceptions of sexual harassment, this study utilized an adapted multi-item scales by Fitzgerald et al. [58] and a modified set from Li et al. [7]. To measure each item, the researcher utilized 6 items and a 7-point scale: “How much do you agree or disagree with these statements?” (1: strongly disagree to 7: strongly agree). The third and fourth parts of the survey focused on employees’ psychological distress and workplace deviant behavior. The researcher used 4 items based on those developed by Kessler et al. [59] and Birkeland et al. [60] to measure employees’ psychological distress, while measuring workplace deviant behavior with 4 items developed by Bennett and Robinson [61]. In addition, the researcher measured organizational silence, which was used as a moderating variable in this study, with four questions based on Dasci and Cemaloglu [62]. The researcher measured the employees’ psychological detachment with four items based on those developed by Sonnentag and Bayer [45] and Sonnentag and Kruel [63]. For all measurement items, the questionnaire, originally written in English by Brislin [64], was translated into Korean, and two bilingual experts reverse-translated the questionnaire into English. Afterward, they examined whether the meaning of the measurement questions differed between the two language versions three times. Then, the researcher implemented the main survey after checking for any ambiguity in the survey questions through a preliminary test.

In the analysis results, the Skewness ranged between −0.525 and +0.414, and the Kutosis ranged between −0.203 and −0.759, which implies that the normality is satisfied. All measurement items had a Z-score between −3 and +3, indicating the absence of a univariate outlier problem. Kline [66] and Hair et al. [67] reported that Skewness and Kutosis ranging between −3 and +3 allows normal distribution. Therefore, it is proof that the probability of a univariate outlier in this study data is minimal [68]. This study identified convergent validity, discriminant validity, and nominal validity to verify the validity of the measurement items. We examined convergent validity, discriminant validity, and nomological validity to verify construct validity (Table 1 and Table 2). Additionally, we conducted CFA, which is a method of analyzing the structural effectiveness of the collected measurement variables before investigating the causal relationship of a developed theoretical model. As shown in Table 1, Cronbach’s alpha ranged between 0.93 and 0.96, and CCR exceeded 0.80 in all cases, indicating satisfaction of the approval criteria [69,70]. Furthermore, the standardized coefficient of all measurement items was over 0.80, and the result was significant at 0.001 level [71]. The overall fitness of the model was excellent (χ2 = 424.72; df = 220; χ2/df = 2.01; GFI = 0.89; CFI = 0.98). The square root of the coefficient of all measurement items (0.06~0.66) was smaller than AVE (0.79~0.85). AVE showed a higher value than ASV and MSV, thus confirming discriminant validity.

This study has several limitations. First, this study’s results come from a sample that consisted of Korean employees, which poses a restriction on the generalization of the study’s results. Second, the self-report method was used to measure the perception of sexual harassment, psychological distress, workplace deviant behavior, and organizational silence, and psychological detachment, which could have made the subjects respond in a manner they believed to be desirable. Therefore, more objective measurement tools should be chosen in future studies. Third, workplace deviant behavior was used as a final dependent variable in this study. In the future, variables that reflect the organizational performance should be employed. Fourth, although organizational silence and psychological detachment were moderating variables in this study, exploration of new variables that can moderate the negative influence of sexual harassment is also necessary. Additional research that investigates the relationship between diverse independent variables that can affect the organizational environment where sexual harassment can occur, and the dependent variables are necessary in the future.

H.S.J. and H.H.Y. contributed equally to this work. All the authors contributed to the conceptualization, formal analysis, investigation, methodology, writing of the original draft, and review and editing. All authors have read and agreed to the published version of the manuscript. 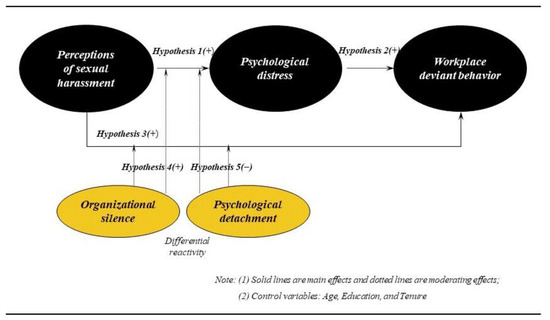 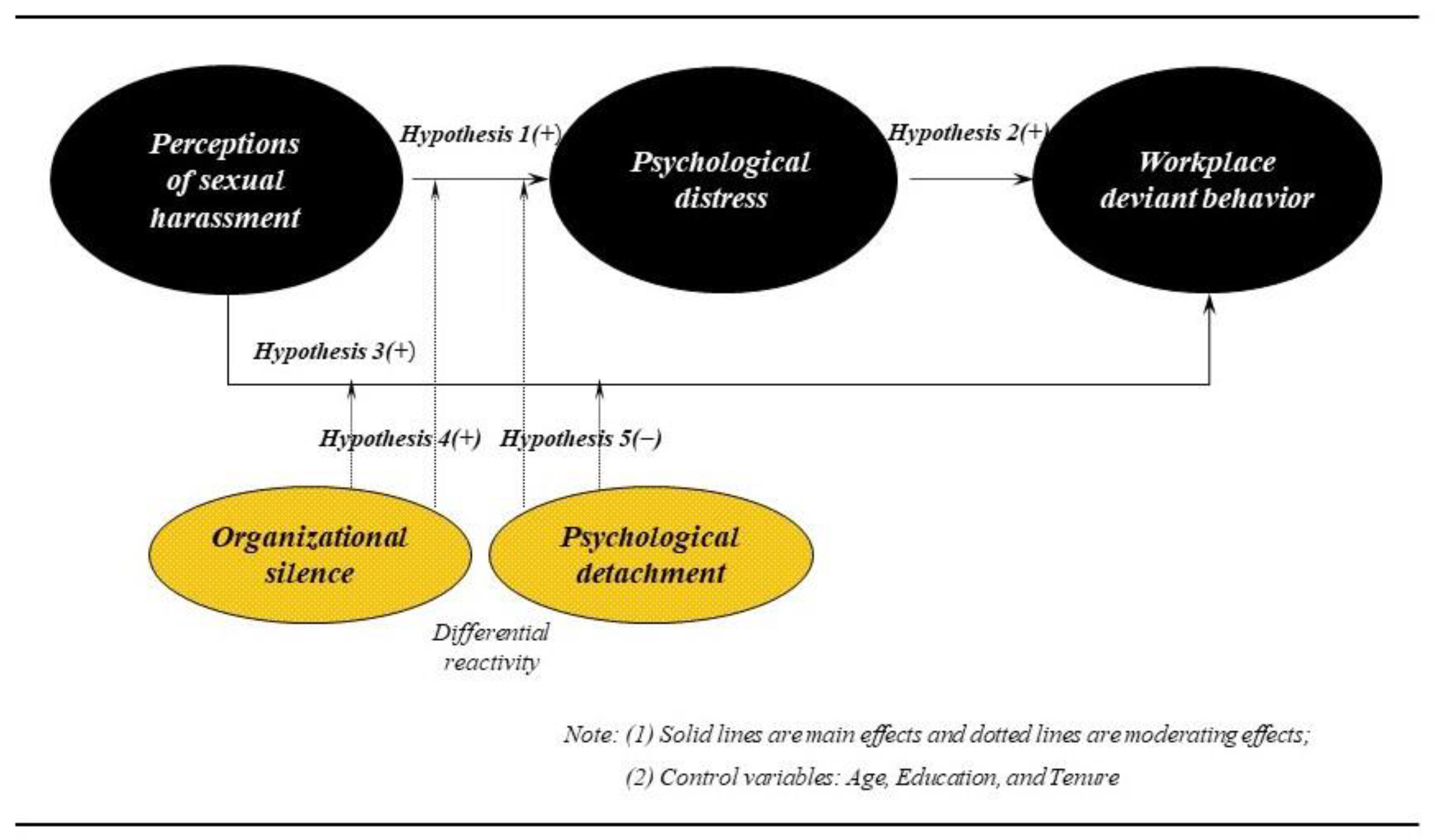 Table 5. Moderating effects of employees’ psychological detachment.
Table 5. Moderating effects of employees’ psychological detachment.
Note: χ2/df = 1.65; GFI = 0.89; NFI = 0.94; TLI = 0.97; CFI = 0.97; IFI = 0.98; RMSEA = 0.04; * p < 0.05, *** p < 0.001, ns Not significant.
© 2020 by the authors. Licensee MDPI, Basel, Switzerland. This article is an open access article distributed under the terms and conditions of the Creative Commons Attribution (CC BY) license (http://creativecommons.org/licenses/by/4.0/).
We use cookies on our website to ensure you get the best experience. Read more about our cookies here.
Accept
We have just recently launched a new version of our website. Help us to further improve by taking part in this short 5 minute survey here. here.
Never show this again