In the traditional extended-duty shift model, each new admission to the on-call shift experiences a reduction in the amount of on-call sleep and an increase in the total shift duration [1]. Recent prospective studies and meta-analyses also suggest that long working hours [2] and shift work [3] increase the risk of cardiovascular disease (CVD). In addition, on-call duty among medical residents is characterized by sleep deprivation and stressful working conditions. Sleep deprivation alters cardiovascular reactivity to acute stressors [4] and increases the incidence of CVD [5,6,7]. Systematic reviews have reported that such long working shifts and erratic schedules lead to acute and chronic sleep deprivation in resident physicians, resulting in numerous adverse consequences in patient care [8].
In 2011, the Accreditation Council for Graduate Medical Education (ACGME) revised medical resident duty-hour policies, limiting resident workweeks to 80 h and shifts to 28 h. These policies were based on studies of the effects of sleep deprivation on human performance and specifically on the effect of extended shifts on resident performance [9]. In Taiwan, similar policies by the Ministry of Health and Welfare limited workweeks to 88 h; and in 2013 there were three versions of limits on consecutive work hours: 24, 28, and 32 h [10]. Several evaluations of these limitations on working hours found essentially no differences in patient outcomes after their implementation [11,12,13,14,15]; however, few studies have investigated the impact of the current working hours policies on physicians’ physiologies, especially cardiovascular reactivity [16,17,18].
A physiological measurement of cardiac function, which varies with stress, is heart rate variability (HRV). The autonomic nervous system is the primary regulator of heart rate. Rhythmic fluctuations in the frequency of impulse conduction along the vagus nerves, modulated by the rate and depth of breathing, result in substantial variations in R-R intervals, a condition known as respiratory sinus arrhythmia [19]. R-R intervals are also affected by mental or physical activity, which reduce the average frequency of the impulses conducted along the vagus nerves and increase the activity of the sympathetic nervous system. The application of HRV analysis has recently gained popularity as a means of quantifying autonomic nervous system (ANS) functioning noninvasively [20,21,22]. Spectral analysis of HRV by Fourier transformation allows categorization into high frequency (HF), low frequency (LF), and very low frequency (VLF) powers. HF is considered to represent vagal control of the heart rate. Because both sympathetic and parasympathetic activities contribute to LF, the ratio LF/HF and normalized LF (LF%) are considered by some investigators to reflect sympathetic modulation [20,21,22].
Our earlier studies have described the long-term [17] and short-term [18] cardiac autonomic modulation among medical interns in workweeks of up to 86.7 h and shifts of up to 33.5 h. Male medical interns with this extremely heavy workload showed a reduced cardiac sympathetic modulation (LF/HF) during duty night work and increased sleep vagal activity (HF) during the first sleep after on-call duty, which corresponded to the Stanford Sleepiness Scales. In a one-year follow-up study [17], interns presented a reduced HRV at 6, 9, and 12 months and cardiac parasympathetic modulation (HF) at 9 and 12 months into their internship, both of which suggested a long-term risk profile of CVD. This study is designed to test the hypothesis that the current duty hours, which limit workweeks to 80 h and shifts to 28 h, have not substantially altered the short-term effects of cardiac autonomic modulation after medical residents’ on-call duty. In addition, most previous studies compared physicians’ HRV indices only during on-call duty and one non-call day rather than a longer post-shift period. The present study had three specific aims: first, to follow, as primary outcome, changes in autonomic functioning of residents through on-call duties, the first post-call day, and the second post-call day by analyzing HF, LF%, and LF/HF, via frequency domain analysis of the HRV; second, to identify these autonomic functional changes during the duty night and post-call rest by controlling the effects of circadian rhythm; and finally, to determine whether any gender differences occur with respect to the physiological impact of on-call duty.

A total of 18 pediatric residents trained at a hospital in middle Taiwan were voluntarily recruited. Of these, 8 males and 4 females were in the postgraduate year (PGY) program, and the other 3 males and 3 females were pediatric residents. All participants were healthy adults, aged 28.1 ± 2.5 (mean ± SD) years. They did not have hypnotic drug abuse or excess alcohol, caffeine, or nicotine consumption during the entire period of study. None of them had any medical condition known to involve sleep or the ANS, such as a psychiatric or cardiovascular disease.
During their pediatric residency training, the participants worked approximately 70.6 to 76.8 h a week, including 28 consecutive work hours and an average of 6 to 9 on-call duties monthly. Each on-call day comprised routine work from 08:00 to 16:59 (9 regular working hours daily), followed by on-call duty from 17:00 to 07:59 (15 h). Per the “post-call post meridiem off” policy of the hospital, the residents continued to work from 08:00 to 11:59 (4 h), and the 28 consecutive hours during on-call cycle would meet the working hours limitation made by the Ministry of Health and Welfare (Figure 1). Generally, 7–9 on-call days per month were scheduled for the PGY residents and 6 on-call days for the pediatric residents.
Participants were given a detailed description of the study; and individual informed consent was obtained in written form. They were aware of this study’s intention to obtain assessments of their autonomic functioning and to monitor their activity and rest cycles. The study was conducted between December 2015 and June 2016. The study protocol was approved by the Ethics Committee of this hospital.

Participants underwent electrocardiographic (ECG) recording by means of a miniature physiological signal recorder (TD1, Taiwan Telemedicine Device Company, Taipei, Taiwan) [23]. The small size (5.2 × 3.1 × 1.2 cm) and low weight (11 g) of the recorder produced minimal interference with work or stress on the participants. Each resident was monitored by the two-lead digital ambulatory ECG recorder with an accelerometer, which was attached at 23:59 on the day before the shift (pre-call). The device continuously recorded throughout the on-call day and the following two days (the post-call day and the second post-call day) until removal at the end of the second post-call day.
The power spectral density was calculated by computerized fast Fourier transformation to evaluate the R-R tachograms by frequency-domain measures. The R-R signals to be analyzed were truncated into successive 64 s (4096 points) time segments (windows or epochs) with 50% overlapping. A Hamming window was applied to each time segment to attenuate the leakage effect [24]. We also handled the artifacts by the R-R rejection procedure. A temporary mean and SD of all R-Rs were first calculated for standard reference. Each R-R was then validated. If the standard score, i.e., (value-mean)/SD, of an R-R value exceeded three, it was considered erroneous or nonstationary and was rejected [25]. The average percentile of R-R rejection according to this procedure was 1%. Our algorithm then estimated the power density of the spectral components based on fast Fourier transformation every 5 min. The resulting power spectrum was corrected for attenuation resulting from sampling and the application of the Hamming window. The power spectrum was subsequently quantified into the standard frequency-domain measurements as reported previously, including the variance of the R-R interval values, VLF power (0.003–0.04 Hz), LF (0.04–0.15 Hz), HF (0.15–0.40 Hz), total power (TP), LF/HF, and normalized LF (LF%). LF% was calculated from LF/(HF + LF) × 100. The variance of the R-R interval, LF, HF, and LF/HF values were logarithmically transformed to correct for their skewed distributions [25].

We obtained sleep data using a weekly sleep log together with an accelerometer that was attached to the recorder. Acceleration values were stored in the flash memory for each axis, namely X (mediolateral), Y (vertical), and Z (anteroposterior). Each axis had a sampling frequency of 125 Hz and could detect accelerations ranging from −3G to 3G. A vectorial magnitude was calculated as . The quantified magnitude of physical activity was estimated by calculating the root mean square of the vectorial magnitude for each time period (epoch). We applied the previously described zero-crossing method to count the number of times per epoch of sleep time that the activity signal level approached zero, 0.004087 g [18]. In our study, the ECGs recorded during nocturnal sleep were excluded.

In conclusion, our studies suggest the current duty-hour guideline, which limits workweeks to 80 h and shifts to 28 h, resulted in reduced sympathetic modulation and increased parasympathetic modulation during the two days following on-call duty. Our findings provide insights into electrophysiological biomarkers to monitor physicians’ work overload and may facilitate the improvement of policies on duty-hour restrictions.

The authors gratefully acknowledge the cooperation of the participants in this study and thank Ms. Hsiao-Han Lin for her excellent technical assistance.

The authors have no financial relationships relevant to this article to disclose. 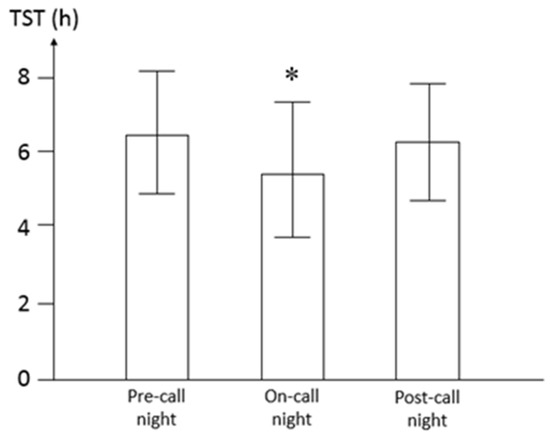 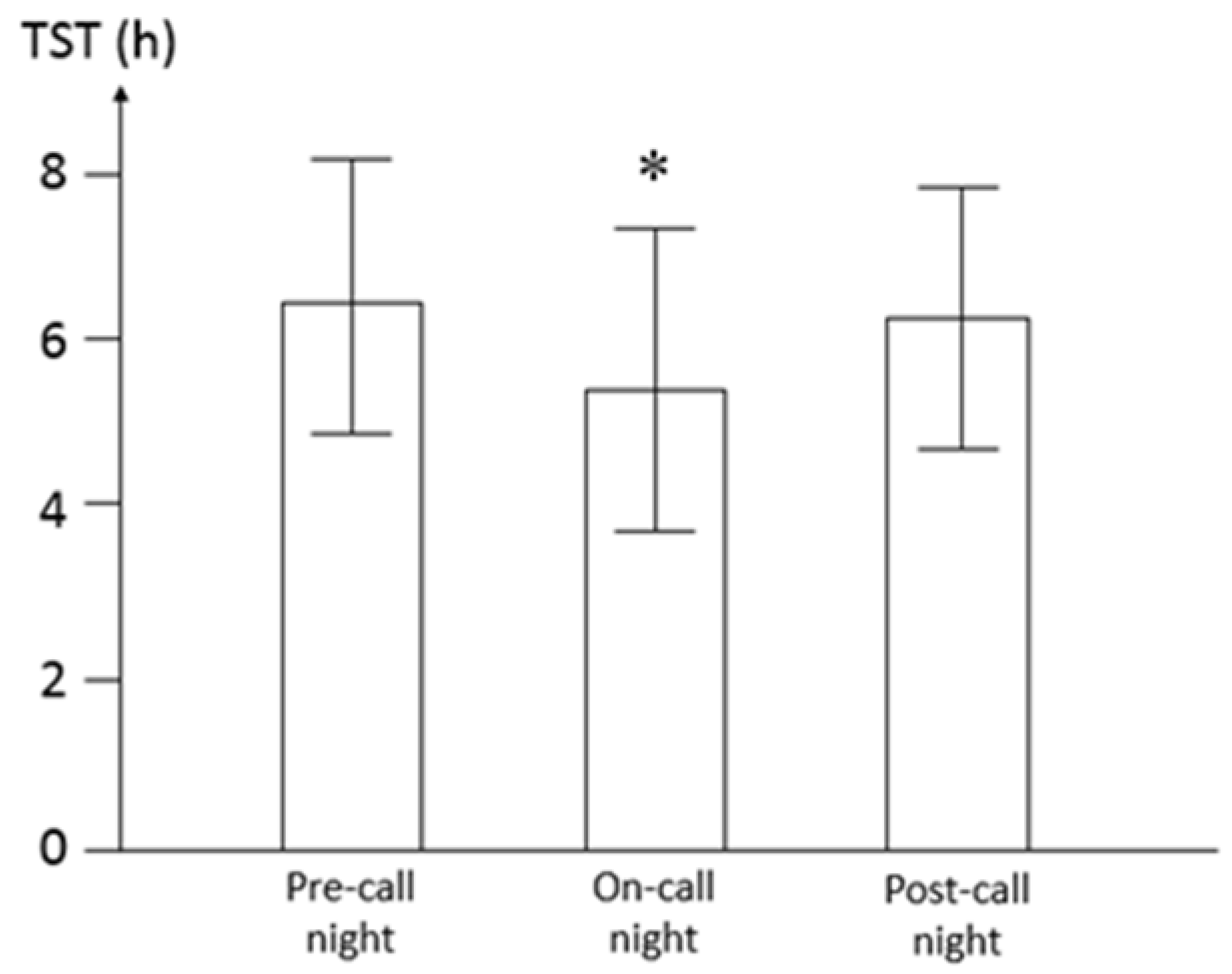