Prediction of Epidemic Spread of the 2019 Novel Coronavirus Driven by Spring Festival Transportation in China: A Population-Based Study
Previous Article in Journal

Systematic Assessment of Health Risk from Metals in Surface Sediment of the Xiangjiang River, China

(1) Background: Aedes albopictus has rapidly expanded throughout Europe, becoming a public health concern in the Mediterranean Basin. (2) Methods: Following the detection of Ae. albopictus in the southwestern French region of Aquitaine in 2012, an entomological surveillance programme was implemented in the Basque Country (Northern Spain) in 2013. (3) Results: Ae. albopictus eggs were first detected in 2014 in a transited parking area in the northeastern sampling point, 22 km away from the nearest French site with recorded presence of tiger mosquito. At this site, eggs were found throughout the study (2014–2018). Other western and southern municipalities became positive in 2017 and 2018. Ae. albopictus adults were first captured in 2018 by aspiration of the vegetation in an area where eggs had been detected since 2015, suggesting a progressive establishment of a self-sustained population. Incidence of insect bites in humans was roughly constant over the study period except for a significant increase in 2018 in the Health County where eggs had been detected since 2014. Densities of Ae. albopictus eggs in positive areas remained at similar levels over the years. (4) Conclusion: Multiple approaches and standardized methods are necessary to successfully control this vector. View Full-Text
Keywords: Aedes albopictus; surveillance; ovitraps; human bites; biocides Aedes albopictus; surveillance; ovitraps; human bites; biocides
►▼ Show Figures 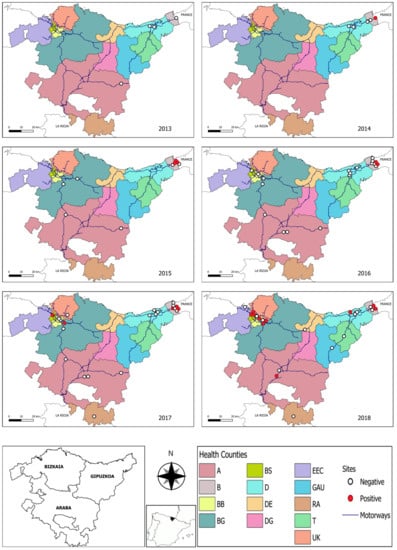